Alter Ego (アルターエゴ, Arutā Ego?) is an Alter Ego-class Servant able to be summoned by Ritsuka Fujimaru in the Grand Orders of Fate/Grand Order. She also appears as an enemy-only MoonCancer-class Servant.

Alter Ego's True Name is Kiara Sessyoin, also known as Heaven's Hole (ヘブンズホール?) and the Third Heterodoxy Pleasure Deva of Deliberate Delight (随喜自在第三外法快楽天?). She appears in “FGO” as a staff of the offshore oil platform Seraphix. While she was exasperated upon being allocated to the Western church despite being a Buddhist, she wholeheartedly endeavored in her professional duties. At this point of time Kiara was unmistakably a saint. But on January 2017, having escaped alive from the Temporal Temple, the demon pillar Zepar ended up hijacking her body and turning her into a puppet in order to rule over the Seraphix as a demon underling. Zepar plan failed and at some point Zepar itself was dominated by Kiara, who turned into a Demon that could freely manipulate demon pillars and in the end metamorphosed into a Beast. Kiara discovered her most excellent self among the many parallel worlds and fused with it. Bringing up the imaginary phenomena of the CCC world to the FGO world, she turned her own body into a SE.RA.PH and grew by making Servants into source of nutrients. Ultimately, she schemed to become one with the Earth, but her climax was obstructed by Meltlilith, BB, Passionlip and Chaldea’s Master.[1] 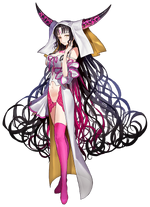 Alter Ego's Stage 2 in Fate/Grand Order, illustrated by Arco Wada.
Add a photo to this gallery

She became more obedient by turning into an Alter Ego. To be specific, she vowed to herself to lead a life of contentment until her contract ends. Therefore, even though her personality has not changed, she no longer thinks of preying on everyone she lays eyes upon. Her attitude towards the Master is just like the enemy of Buddha - the Mara. Even while awaiting in anticipation for the moment when the Master will lose to his desires and indulge in her, she cheers on so that he does not lose to her temptations.[1]

Her personality is introverted, timid and active. A graceful and elegant woman, but by no means strait-laced. Possessing the nonchalance and tolerance to respond to any joke with an smile, her personality is warm and tender. Despite showing a chaste sense of values and speech, her words sometimes have a strange eroticism. Gentle yet assertive. Vigorous despite feeble-looking. Empathetic and filled with compassion. She possess the thoughtfulness to perceive the truth of things, read the hearts of all people and properly understand their standpoint・anguish.[1]

For Kiara, she alone is “human” and all other humans are merely beasts or insects that had taken human form. As such, despite directing her love towards the whole outside world, its final destination is something “for her own sake”.[1]

A pervert not only in regards to sexual pleasure: she consumes all surrounding lives “for her own sake” and feels the greatest sensuality in seeing them self-destruct. Because of that, she thinks that it is OK to be raped or killed. Also thinks that it is OK to rape or kill. At any rate, it is fine so long as the life of that human ends by means of the female body called “Sesshouin Kiara”. Kiara will attentively watch that image and simply smile while feeling ecstasy. That state is like a bodhisattva who watches over people's lives in pity. Even if that is a path towards destruction for those who are trifled with while on the palm of her hand, this process is undoubtedly a heavenly pleasure.[1]

The antagonist of the enlightened. The saint that appeared in the Deep Sea Virtual Paradise, SE.RA.PH. The one who employed the rare qualities as a messiah that she possessed only for her own sake, metamorphosing into something not-human. Her pledge, her hope was put to an end when she had just barely reached the shore. Kiara herself vanished at that time, but maybe due to the changing of her way of thinking upon death, she left a portion of her power behind as an Alter Ego and accepted for it to be summoned by Chaldea in the future.[1]

or so she says with a reserved smile. But, of course, her real intentions are nothing like “for the sake of humanity”. One must be cautious, for even after becoming somewhat more mellow, her nature has not changed at all.[1]

The rank of Clairvoyance (Beast) is low, so she cannot look into the far away. However, she can see through the desires and truths of the humans in front of her, exposing them. If it was just that, this would be a skill of a wise man, but Kiara herself end up getting excited by exposing the animal nature・truth of the opponent, acquiring overwhelming joy. Just like a poisonous snake that licks her lips before a prey.[1]

Thesis of the Still Heart (五停心観, Goshin Shinkan?, Five Thought-Stopping Meditations) is a medical software that Sesshouin Kiara developed. A virtual formula created for the purpose of mental care, it measure the sediments・disturbances of the mind and stabilizes the mind by physically picking it out. Originally created in order to produce a map of the patient’s mind and help understand it.[1]

Arco Wada is the character designer for Kiara.[1]

Retrieved from "https://typemoon.fandom.com/wiki/Alter_Ego_(Fate/Grand_Order_-_Kiara)?oldid=138364"
Community content is available under CC-BY-SA unless otherwise noted.