The Saint Graph's registered True Name is Sitonai. This is due to the fact that it seems like Sitonai is the one who manifests the strongest outside among the three Heroic Spirits (Divine Spirits) gathered inside the yorishiro.[1]

The person who became the container for these Divine Spirits is not a human Mage, but the latest and the final Homunculus created by the Einzberns. One possessing Command Seals that cover the entire length of her body, first-class precision in Magecraft and the best performance when it comes to being a Master. The ability to function as the Lesser Grail is also concealed in that body.[1]

The first component of the Alter Ego is Sitonai of Ainu mythology.[1]

The second component of the Alter Ego is Louhi (ロウヒ?) of Finnish mythology.[1]

The third component of the Alter Ego is Freyja (フレイヤ?) of Norse mythology.[1] 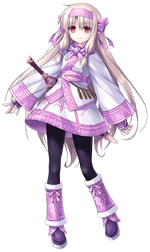 A girl who shows a pure smile. However, that smile hides a great cruelty----[1]

Personality-wise, she resembles that of the homunculus who became the base. The young Heroic Spirit Sitonai of the Ainu who displays the courage to fight unfitting of her age, the Goddess of Love Freya who shows sympathy to her opponents, and the witch Louhi who mercilessly slaughters her opponents... While it is possible to manifest any aspect of their personalities into the Alter Ego, for now it takes after the personality of “the girl who became the vessel”.[1]

In battle, Sitonai wields a sword and a bow. She also fights using her fists and her familiar.[3] Her Noble Phantasms are Optateshke Okimunpe[1] and Pohjola Fimbul.

Territory Creation (A Rank): A skill granted by the nature of the witch Louhi. Can create a special territory that comes under the category of 「cave」, 「darkness」.[2]

Item Construction (B Rank): A skill granted by the nature of the witch Louhi. Since she doesn’t get much serious, it stops at rank B.[2]

Divine Core of the Goddess (B Rank): A skill that represents that one is a goddess. It is also a composite skill that includes Divinity. The reason why it’s fractioned into rank B, is because Sitonai is a subspecies of Possessed Servant.[2]

High-Servant (A Rank): A skill that displays that one is a complex of Heroic Spirits. The three Heroic Spirits (Divine Spirits) Sitonai, Freyja, and Louhi are lending their power. Moreover, she calls herself 「Sitonai」. Her True Name at the summoning of Chaldea’s style is registered as Sitonai as well.[2]

Snow Fairy (EX Rank): A unique skill as an Alter Ego, defined as an id_es. The evolution of the Child of Nature skill. Once she comes to the clear decision of treating them as a target of attack, even the loved ones can be frozen. The ability to arbitrarily freeze the targets of the surroundings. She mostly doesn’t use this power for attack, and mainly uses it as a defensive ability. Against beings with hostile intent or harmful beings, it operates automatically. Auto-guard.[1][2]

Emotional Freezing (B Rank): Emotional freezing. Emotionlessness. While she is a girl that smiles innocently, her thoughts and mentality that sometimes act like those of a ruthless demon, have become a weapon. The heart of ice sometimes becomes a sword, and sometimes becomes armor.[1][2]

Kamuy Yukar (A Rank): An anthem in first person that speaks of oneself as a Kamuy. She as an Alter Ego can borrow the power of several Kamuy from Ainu mythology by reciting the Kamuy Yukara. It’s even possible to make use of the power revolving around the top Kamuy of mountains, villages, and the open seas, Pase-kamuy.[1][2]

Crimson Gold (B++ Rank): A skill of the Norse Goddess Freyja. She, who attracted not only gods but also giants, loved only one person and it was said that tears of crimson gold flowed out as Freyja wept thinking about him, who lived only to travel. This skill is not used in Fate/Grand Order.[1][2]

Retrieved from "https://typemoon.fandom.com/wiki/Alter_Ego_(Fate/Grand_Order_-_Sitonai)?oldid=162296"
Community content is available under CC-BY-SA unless otherwise noted.