Magic Resistance
B
Independent Action
A

Furthest Earth
A
Persistence
B
Boundlessness
A

Alter Ego (アルターエゴ, Arutā Ego?) is a Counter Guardian appearing in the Imperial Capital Holy Grail Strange Story of Fate/KOHA-ACE. She is also an Alter Ego-class Servant able to be summoned by Ritsuka Fujimaru in the Grand Orders of Fate/Grand Order. There is also a parody form known as Devil Saber.

She appears as a young teenage girl with long white hair, tied back at either side with red tassels. She wears a red and black dress bearing similarity to a short kimono and long European style coat, complete with high collar held closed by a rope tassel. She appears to wear long stockings. 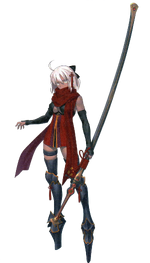 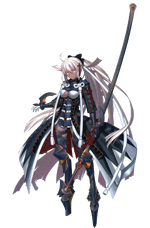 Alter Ego Stage 3 in Fate/Grand Order.
Add a photo to this gallery

She is more emotionless than normal due to her support from the Counter Force, but her roots as Okita remain the same. She takes on a "hitman attitude that will kill anything."

In terms of her likes and dislikes, she has stated in her My Room Lines that she enjoys Oden, even to a point where she would hesitate to destroy the Holy Grail after she found out she could wish for Oden during the summer. When asked about her dislikes, the only thing that came to her mind was when she participated in a raffle and didn’t win anything. She stated that “drawing nothing but blanks was really mortifying in reality”. Both of these likes and dislikes could be related to her parody version, Devil Saber (Parody)’s likes and dislikes as both enjoy Oden. Devil Saber (Parody)’s dislike is “When no Rares drop after rolling 10 Gachas”. This can be related to Okita Alter’s dislike toward drawing blanks, even in terms of store lotteries.

Okita Alter also cares deeply for her master for “granting her a life that should have never been possible”. She has expressed her gratitude multiple times in the My Room Lines for everything her master has given her. But besides these three things, and a wish to wear clothes like Berserker Nobu, she holds most other things and people at a rather neutral opinion.

Retrieved from "https://typemoon.fandom.com/wiki/Alter_Ego_(Fate/KOHA-ACE)?oldid=149341"
Community content is available under CC-BY-SA unless otherwise noted.