TYPE-MOON has created a yearly April Fools' Day parody website each year since 2005.

moon.cinemas.jp is a fake movie theater site listing a number of parody films, some of which have their own mini-sites. One of the films joked about is an adaptation of Kara no Kyoukai Mirai Fukuin, an epilogue to Kara no Kyoukai. It was decided it would be done as a real film several years later.

During this year, many of the Fate/Stay night characters recieved a twitter. Amongst the jokes include Saber becoming Saber Alter, and Rin thinking the twitter was her diary.

Main article: The Room of the April Witch

Rather than a typical joke, they instead created an original and serious short story based around on the concept of April Fools' Day. The Type-Moon Mobile Site featured one of 79 splash images with text every time front page was loaded.[2]

Koha-Ace: Chemical Maid Kohaku is a parody movie poster similar to Neco-Arc The Movie, and it has the tagline “The Three Koha-Big-Bangs will go down in history.” The joke for 2012 is much smaller in scale compared to previous years, which each had its own site. The movie poster was placed on the main page of their site, and clicking on it brought up a small two page comic that lampoons both the scale of the joke and the number of times Mahou Tsukai no Yoru was delayed.[3]

This movie was later referenced in Carnival Phantasm, with Kohaku claiming it had been animated. However, before it can begin, Kohaku states their budget had been completely spent in the preceding action scenes.

The poster's style is derived from the visual design of posters for Mobile Suit Gundam AGE.

Back Alley Satsuki - Chapter Heroine Sanctuary (路地裏さつき ヒロイン十二宮編, Rojiura Satsuki - Hiroin Jūnikyū-hen?, lit. "Back Alley Satsuki - Zodiac Heroine Edition"), also known as Rojiura SATSUKI Chapter Heroine Sanctuary, is a visual novel-style game following Bronze Heroines (ブロンズヒロイン, Buronzu Hiroin?) Satsuki, Riesbyfe, Sion, Ciel, and Mysterious Heroine X (Saber) as they seek to climb through the twelve palaces of the Gold Heroines (ゴールドヒロイン, Gōrudo Hiroin?) based around the Chinese Zodiac and parodying Saint Seiya. It unlocked throughout the day when it was active, presenting each chapter in a stone circle illuminating each zodiac symbol with flames. Some chapters have certain gimmicks, such as Pokemon-style battles that can lead to a game over.

TM-channel was a number of streams featuring various characters like Saber, Satsuki Yumizuka, and Lancer.

TMitter2015 was a scenario where various characters tweeted a interconnected storyline over the period of April 1st, 2015. 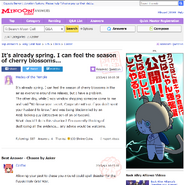 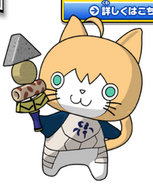 Capsule Servant
Add a photo to this gallery

Notorious Brand is a joke created by French Bread, the creators of Melty Blood. It was presented as a 2d fighting game similar to Melty Blood based upon Fate/stay night. It has a release date of April 1st, 2014. The plot follows strange events occurring one year after the end of Heaven’s Feel. There is a mysterious shadow once again stalking the night and killing innocents, which Shirou will not stand for without fighting against it. He manages to master Unlimited Blade Works with his puppet body, but he cannot even scratch the shadow. Its actual identity is Stanrobe Calhin, a ghost Dead Apostle, who has fused with the leftover remains of the Holy Grail. He has become an entity with god-like powers who will destroy everything in his path, and Zelretch summons Servants from alternate dimensions to combat him. They are too busy fighting each other to actually do anything else.

It has an innovative ten-button combat system that will allows for control of both a Servant and Master at once. Commands can be given to the Servant, or they can be kept in the background to enhance the Master’s fighting. Another unique feature is the mana bar, which dictates how long a Servant can fight and when it can use its Noble Phantasm. The crucial strategy of the game is knowing when to switch between using Masters and Servants The characters include Saber, Shirou, Archer, Rin, Rider, Shinji, Sakura (Dark Sakura and hollow ataraxia forms), Ilya, Berserker, Lancer, Kotomine, Gilgamesh, Caster, Kuzuki, Zouken, Assassin, True Assassin, Lysritt, Sella, Issei and his brother Reikan, Neko-chan and the legendary bartender Ryuu Sasakura, The Mitsuzuri siblings Ayako and Minori, the demon girls of the track team, Kaede, Kane, and Yukika, and the gorgon pair of Stheno and Euryale. Taiga and the servant of the Tiger may also make an appearance.[4]

Ufotable's 2012 April Fools' Day joke was an announcement for an adaptation of Sensha Otoko.

Retrieved from "https://typemoon.fandom.com/wiki/April_Fools%27_Day?oldid=126642"
Community content is available under CC-BY-SA unless otherwise noted.