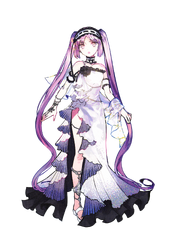 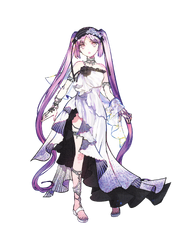 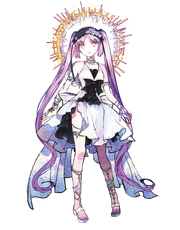 Archer's True Name is Euryale (エウリュアレ, Euryuare?) the Far-Flier (遠く飛ぶもの, Tōku Tobumono?), the second daughter of the Gorgon Sisters and the younger sister of Stheno and older sister of Medusa, who were goddesses born from the wishes of mankind for ideal idols, the embodiment of the yearning hearts of men.[2] While she and Stheno were "perfect goddesses" who would not age, Medusa had some kind of flaw that allowed her to grow. They should have been three united sisters, but this divide allowed them to become three separate individuals.

14,000 years ago, she and Stheno was present when the ancient gods such as the twelve gods of Olympus fought against Sefar, the giant who fell from the stars.[4]

While Medusa was different from the start, her existence also brought irregularities in the two who were still the same. Due to the jealously of Athena, Medusa was cursed, had the faith of her followers taken away, and was banished to the Shapeless Isle as a monster. She called Stheno and Euralye monsters because they would never grow old, but that was a lie to cover the fact that they were "perfected goddesses."

Out of love for their younger sister, they also decided to live on the island although they were still worshipped. Living peacefully for a time, Medusa fought off men wishing to slay the rumored monster and those who wished to take their goddesses away by force. Loving to toy with men, heroes seeking to court them were met with impossible demands and forced back to their home countries only able to weep. While those challenging Medusa were petrified, those seeking marriage were ridiculed beyond reason until meeting their deaths. Due to a deep hatred developing for the humans, Medusa soon began to travel down the path of a monster. Though they warned her not to rejoice in killing humans, she began to feast on their blood and pleasurably seek out new methods of killing them. As even they began to fear her, she soon left her sisters when she could not bare to been seen in her slowly transforming state, eventually becoming the Gorgon.

Euryale and Stheno are identical sisters called the "snow-white Gothic Lolita duo." Her weight in Fate/Grand Order comes from a report from Medusa.[1][2]

Euryale was pictured as the "ideal girl", displaying a carefree demeanor, an overflowing smile, and the essence of purity in her actions and words. It is said that men will tremble in honor and swear to protect her at the cost of their lives should just their names pass from her lips. Unlike their younger sister who is an expert in fighting and disliked humans, she and Stheno perfect themselves as idols who liked humans, welcoming the men visiting the island, comforting them, and sending them on their adventure. Though her image on the surface seems to paint that as the very meaning of her existence, that is only to those observing them from afar. She is a devil who loves everything pretty and cute, freely and unconditionally. A "cute young girl" who thoroughly behaves like a spoiled child and makes men care about her.[2] While she loves humans, it is not as "living beings", but rather in the way of toying with those she likes, embarrassing and driving them to ruin while watching them struggle. In reality, they truly hate men, while their sister is the one who bares them no ill will. They, loved by men, should be destined to be violated by them day after day. Though she despised her fate, Euryale had given up until Medusa became the one to protect them. Due to the "irregularities" caused by Medusa's growth, she would describe her older sister as the "ultimate display of mood swings." As the "impish, cowardly second sister", she would slyly say "If you keep quite, no one will be mad, and if they don't find out, then there was nothing wrong, hohoho." She will only feel slightly guilty sometime later. She loves to tease and belittle Medusa, but does deeply care about her. Along with her sister, they like to suck her blood, noting that it is extremely sweet. Due to remaining the same as her sister eternally, they have a closer link than even telepathy, like two parts of the same body who share the same senses, feel everything the other does, and share the basics of their personalities. They will often speak as if they are one person, using singular pronouns to describe each other.

Although she is in fact endowed with purity and chastity, if one were to get to the core of her character, it is also possible to say that she is a sneaky, moody person. Nobody will be mad so long it is kept quiet, it is not trickery if it is not exposed - she possesses such mentality (however, she will suffer with self-loathing later).[2]

Ritsuka Fujimaru
In regards to the Master, she smiles as if having taken a liking of them, but this is in fact because she is thinking of having fun seeing the course of their ruin. Since this is the first human she has seen after a long time, she wants to have her fill observing their suffering--[2]

She appears in Rider's story. The truth and tragedy of the Gorgon monster are told.

Okeanos: The Four Sealed Seas of the EndEdit

She is seen with Asterios.

Euryale is amongst the "Okeanos" Singularity Servant to aid Chaldea against Demon Gods Pillar.[5]

In her interlude From Me to My Sisters, Euryale goes to the Shaped Isle with Ritsuka and Mash, taking them to a cave where she says her reward for Ritsuka for helping Stheno is. Upon entering, they are confronted by a chimera, inspiring envy in Euryale of her sister for having one. After disposing of it, Eurayle finds what Stheno was keeping in the cave: a message from her saying for both of them to never change if they are summoned together.

Euryale appears in Capsule Servant as the Commander-in-Chief of the Dimensional Empire MATO (時空帝国マト, Jikū Teikoku Mato?). Alongside Stheno, they use the anti-SAKURA giant humanoid weapon MEDO-SA to battle Shirou.

In Fate/kaleid liner PRISMA☆ILLYA 2wei!, the eleventh of the manga and the seventh episode of the anime, when Irisviel von Einzbern talks about the power of a big sister, Euryale makes a cameo appearance alongside Touko, Stheno and Kohaku to illustrate Irisviel's remarks.

Euryale is a Perfected Goddess (完成した女神, Kanseishita Megami?) with the power of immortality and eternal youth, differing from the gods of Olympus who had to halt their aging with the golden apples. Born as an "idol", her "divine essence" is to remain the same from the moment of creation to destruction. Despite that, she is of the weakest beings in the world. Possessing no ability to fight, she will starve if left alone, requiring the help of others to survive. Differing from her sisters embodying the concept of "forever young and immortal", Medusa grew and developed abilities that allowed her to act as their protector. Her purpose was to be an "eternal idol", the incarnation of a pure maiden idealized as a never-aging young girl. Her purpose was "just to be loved and spoiled", whose beauty would never be matched by Medusa's best efforts.

She is a deity from ancient Greece and originally not something that could be summoned as a Servant. Also, in exchange for eternal beauty, as a goddess she is the weakest existence in the world. But she became somewhat more sturdy upon turning into a Servant.[2]

Her personal skills are Alluring Nightingale (魅惑の美声, Miwaku no Bisei?).

Divine Core of the Goddess is a personal Skill that express being a perfected goddess from birth. A composite Skill that comprises the Skill Divinity. Preserves the absoluteness of the mind and the body. Repels mental interference and the body does not changes/grows.[2]

Due to her being a goddess, her very nature manifests as a skill called Whim of the Goddess. It bestows several varied effects, but they are not necessarily limited to beneficial things.[1]

Retrieved from "https://typemoon.fandom.com/wiki/Archer_(Fate/Grand_Order_-_Euryale)?oldid=161775"
Community content is available under CC-BY-SA unless otherwise noted.