Archer's True Name is James Moriarty (ジェームズ・モリアーティ, Jēmuzu Moriāti?). In the Sherlock Holmes Series, this mathematics professor is famous as Holmes' greatest and strongest rival. Despite appearing in only three works - furthermore, most of the time, he is merely mentioned by Holmes - the charisma of this evil genius nevertheless obtained tremendous endorsing thanks to the secret maneuvering during Holmes’ final case (although he would later be revived...). A genius, philosopher, thinker, and an extremely outstanding intellect. Holmes once said that he was the "Napoleon of the Criminal World“ - despite being a simple mathematics professor, his organization web supposedly spread all over Europe. According to the setting revealed within the story, he engaged in a job that was like a criminal consultant so to speak - or something.[1]

In addition, although the Holmes Series itself is a collection of works that should be called the pioneer of every “mystery”, it could perhaps be said that Moriarty is also the fundamental being for a charismatic criminal that “plans crimes without receiving any wrongdoing for that”.[2]

Moriarty’s public appearance is a mathematician/teacher. However, one of the treatises written by him, The Dynamics of an Asteroid, has been buried in the dark without almost ever appearing on the surface, and Isaac Asimov thought of an idea for that and wrote The Ultimate Crime, a short story in the Black Widowers Series. Also, it is highly likely that Holmes intentionally circulated misinformation to have Moriarty’s image and appearance differ from the one in the original texts.[2]

Through the machinations of Baal, Archer is a fusion-type Servant that absorbed the abilities of the Phantom Max (マックス?) The Freeshooter (魔弾の射手, Madan'no Shashu?, Magic Bullet Shooter) from the opera “Der Freischütz”. In the story, a huntsman obtains magic bullets that always bring down the targeted prey by selling his soul to a demon. However, the story goes that the seventh shot alone was fired towards someone the demon wanted - in other words, someone who would bring despair to the contractor.[1]

Archer has the body of a 55 years old man. His white hair is slicked back with a single strand hanging over his right eye. He also has a mustache. 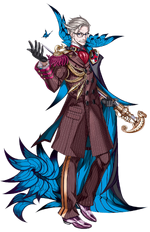 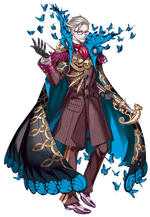 Archer Stage 3 in Fate/Grand Order, illustrated by Raita Honjou.
Add a photo to this gallery

A charismatic evil person. The dignified appearance of that charismatic evil person is so overwhelming, those with a rebellious spirit will lose their feelings of wanting to defy him in his presence. As a philosopher and a mathematician, Moriarty thinks of chaos as something “good”. Even though he was summoned as a Servant, due to “The End of the Spider Thread” Skill, he has become a being that one must always be careful around.[2]

Moriarty is a scheming individual who had planned to destroy the world by any means necessary, even through the use of betraying the protagonist after becoming close to them. His desire to defeat Holmes also motivated many of his actions, including the aforementioned plan.

Having never cared for anyone in his life, Moriarty is an amoral human being who can rarely be trusted. However, he possesses a weakness for daughter-type Servants and becomes enthusiastic towards the idea of being Fran's "papa." He was also ultimately unable to betray the protagonist after bonding with them and ends up holding himself back during their final fight, leading to his defeat. He also makes remarks that hint towards jealousy towards Holmes for him being summoned in a youthful, handsome body, while he was summoned as an old man.

Towards his Master, Moriarty comes into contact with them as a relatively pleasant grandfather. Also, he occasionally whispers evil and will try to lead his Master into it. Nevertheless, if they do not give in (deepen their bond with him), Moriarty will display his mettle for his Master and will try to be helpful to them while still being evil.[2]

Moriarty is also somewhat wary of magecraft, as he is an existence closer to the present era. Though he is aware of its existence and has prepared plans against it, he does not tread too far into magecraft itself. Moriarty also speculates that his attitude towards magecraft is the reason Holmes associated with magecraft organizations in his life.[3]

Sherlock Holmes
As everyone knows, Moriarty’s ultimate rival. However, despite Moriarty being summoned as a man of around fifty, Holmes does not really assent to that for he is obviously youthful. Because he is being imposed a destiny called————‘he will always be defeated when doing battle against Holmes head-on’, Moriarty joined forces with Demon God Pillar Baal in order to overturn that. Thereafter the Shinjuku Phantom Incident, it is said that when Chaldea’s Holmes is being inattentive, Moriarty would be slapping victory declaration papers on Chaldea’s doors and hallways, and the protagonist and Mash would be peeling them off while sighing.[2]

Frankenstein
Due to being called Papa, something inside Moriarty’s brain sparked, his evil influence was turned inside out, and he shows off a very papa-like manner with a flower circle above his head, as if he was really called a Papa. Fortunately, since Frankenstein has a good sense in its own way, Moriarty regains his true character whenever she hits him hard at a time where he behaved recklessly.[2]

Henry Jekyll
While alive, Moriarty awakened Mr. Hyde, who is called evil, by setting a trap. He does not even consider that fragment evil. Since he considers it as something like, “Because, for him to exist individually, that itself is his achievement”. Because it looks like he will be killed if he puts that into words, he has been refraining from doing so. Although Moriarty utters, “I want to get along with him”, this is relatively what he really thinks. Because after all is said and done, the works he sent out at a whim will be playing an active role for the sake of the world.[2]

Hessian Lobo
On the occasion of the Shinjuku Phantom Incident, Baal, who had acted as Archer of Shinjuku, conducted a remodelling of Phantoms as he desired. For that reason, concerning that relatively, a terribly incalculable chimera had been completely finished, Moriarty secretly puts a distance between himself and Avenger of Shinjuku as a matter of fact.“Dangerous, very scary!”[2]

He and Bael made an alliance to obtain their own individual goals:Moriaty want to beat Holmes and Baal wants to kill Ritsuka. They then need to forget their memories

Normally, James Moriarty would be summoned as a Caster-class Servant, however his fusion with the Phantom Der Freischütz has resulted in his manifestation as an Archer.[4] He is shown carrying a cane-sword, bearing a chameleon theme and a revolver cylinder, trigger, and barrel, revealing that it is also a gun when he attacks, referencing the air-gun cane he had in the stories.[5]

Moriarty possesses a formidable intellect, capable of devising and carrying out complex evil schemes. While he has enhanced physical abilities as a Servant, he still experiences the effects of his age.[6]

Moriarty is capable of performing modifications to Saint Graphs, having modified Frankenstein and Charles Babbage during the events surrounding the Ishtar Cup.[7] Working together with Baal in the Shinjuku Singularity, the two were able to devise and implement a method of fusing Phantoms to Servants to grant them additional capabilities or fusing Phantoms together to form a new Servants.[6]

His primary weapon is his variable combat coffin, displaying usage of a chainsaw, machine gun, and rocket launcher, as well as simply swinging and hitting people with it via a chain attached to it.[5]

Moriarty boasts that “Because he died at that place, it is fitting to drag this coffin along.” Unexpectedly, it is a formidable weapon equipped with multiple heavy weapons such as a missile launcher and a light machine gun. Its ammunition is infinite as well, but the drawbacks are that it is massive and it has an effect on his back.[2]

Moriarty's Class Skills are Independent Action (A+) and Magic Resistance (D).[1] His Personal Skills are Magic Bullet Shooter (EX), The End of the Spider Thread (A++) and Charisma of an Evil Genius (A).[1]

Magic Bullet Shooter (EX) (魔弾の射手, Madan no Shashu?)
The ability to fire bullets to shoot down targets and even overcome any kind of obstacle. It is actually a Skill not from Moriarty, but from Der Freischütz.[2]

The End of the Spider Thread (A+) (蜘蛛糸の果て, Kumo-ito no Hate?)
The faculty to scheme evil. Disrupting order, contaminating goodness, and not causing fate and punishment to face towards oneself. Like a web made by a spider, the evil schemes capture the opponents and causes them to fall.[2]

Charisma of an Evil Genius (A) (邪智のカリスマ, Jachi no Karisuma?)
A tremendous Charisma owned not by one who manages a state, but only by one who is at the top of an evil organization. With Moriarty’s evil Charisma at the Rank of A, it is even feasible for him to control not just the United Kingdom, but the whole world from the shadows.[2]

Moriarty's Noble Phantasm is The Dynamics of an Asteroid.[1]

Raita Honjou is the character designer for James Moriarty.[1]

I was certainly not expecting that it would result in this many characters so far, like this suspicious old man who is being given all sorts of nicknames such as Shincha, Shinjuku Ojisan and Around 50. The image that was being depicted at the time was cold-hearted and unjust, and he was designed with a calculating and intellectual image, but I am taking my hat off to Mr. Writer who broke through that stereotype and obliged to write him as who he is now fascinatingly! Truly amazing! Design-wise, the Ulysses butterflies are a metaphor for a frail victim and the shedding of a disguise during metamorphosis, the chameleon is a metaphor for camouflage, and the spiderweb in the background is a metaphor for a mastermind manipulating crimes from the center; a metaphorical old man. In addition, he is also an old man whose True Name being hidden was not functioning very well for him. I can say it at last, but I came up with and depicted the orientation and pose in the drawings of Moriarty’s standing pose so that it turns out the opposite to Holmes’. -Raita Honjou[2]

Retrieved from "https://typemoon.fandom.com/wiki/Archer_(Fate/Grand_Order_-_Moriarty)?oldid=153014"
Community content is available under CC-BY-SA unless otherwise noted.