Archer's True Name is Tomoe Gozen (巴御前, Tomoe Gozen?). Her years of birth and death are unknown. An individual from the late Heian/early Kamakura periods. The beloved concubine of Kiso no Yoshinaka (Minamoto no Yoshinaka), the famous general who earned the title of Sei-i Taishōgun and was defeated by Minamoto no Yoritomo. Constantly by Yoshinaka’s side, a brave woman who frequently accomplished military achievements. Excelling in military prowess, she was famed as a mighty warrior. The daughter of Nakahara no Kanetō, the younger sister of Higuchi Kanemitsu and Imai Kanehira - both regarded as part of the Kiso Big Four - and a milk sibling of Yoshinaka.[1]

After the chivalrous Yoshinaka had helped the Genji clan overthrow the tyrannical rule of Taira regime, with the Genji being the new ruling power of Kyoto, the Genji clan later betrayed Yoshinaka as they quickly branded their former ally as an evil criminal as Yoshinaka  had outlived his usefulness. As Yoshinaka was persecuted, he managed to have his beloved wife, ​Tomoe Gozen, escape death but at the cost of his own life; Yoshinaka's demise caused Tomoe to grieve greatly for him. Despite this, Tomoe's life did not end in a completely tragic manner, as she managed to give birth to Yoshinaka's son, Yoshihide, and she later lived the rest of her peaceful life as a nun where she prayed that her husband would rest in peace.

In “Kiso’s Last Moments”, the 9th chapter of “The Tale of the Heike” written by Kakuichi, she was portrayed as “of lovely long hair, of truly outstanding features. Exceptionally strong with a bow, a soldier that matched a thousand, always ready to face even a demon or a god, be it mounted or on foot.” In other words, fair-skinned, of long hair, a great archer with outstanding features. A beautiful, mighty warrior - that is Tomoe Gozen.[1] 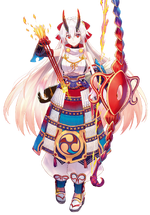 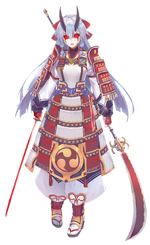 She will probably smile gently, so long as fury does not completely fill her heart. As a scion of ■■■■, she is conspicuously endowed with a savage disposition, but by containing that to the brink thanks to her feelings towards her beloved one, she has acquired individuality as a calm human woman—or so it seems.[1]

Despite continuing to love her lord Yoshinaka, she was not able to be with him in his last moments—A woman warrior that keeps concealing that single regret in her chest. That gentle sadness was transmuted into flames of resentment by Ashiya Douman during “The Tournament of the Seven Heroic Spirit Blade-Masters", turning into an aberration of wild flames that burned the Sagami Province to ashes. Originally, she is a willowy maiden, shunning the conflict between people, and preferring the beauty of nature.[1]

Tomoe Gozen’s view on life and death is clear-cut. She unquestionably believes that a transient guest called a Servant such as herself should silently disappear from the world eventually. In “The Absolute Frontline in the War Against the Demonic Beasts”, she had no hesitations in choosing a simultaneous kill with the enemy general Girtablulu.[1]

Babylon: The Absolute Frontline in the War Against the Demonic BeastsEdit

She was summoned by Gilgamesh in Babylon, but died before Chaldea arrived.

Benkei tells Ritsuka Fujimaru and Mash Kyrielight that Tomoe Gozen fell in combat after taking out the scorpion-man Girtablilu, the intelligent child of Tiamat and general of the Demonic Beasts forces in a mutual kill.[2] She was mentioned by Gilgamesh and he praises Tomoe, saying that she's a competent warrior despite her mixed-blood lineage. Merlin shares the same opinion, her sacrifice bought them a lot of time for their defenses. The defeat of Girtablilu was instrumental and the city might have fallen otherwise.[3]

Shimosa Province: The Stage of Rivers of Blood and Mountains of CorpsesEdit

Amakusa Shirou summons seven Servants and Tomoe is one of the Heroic Spirits Blade-Master, designated as Archer of Inferno (アーチャー･インフェルノ, Āchā Inferuno?).[4]

In her ascensions, she is shown wielding a crimson katana, a naginata, and a longbow. She has the physical strength to pluck a human head barehanded. And the anecdote of twisting off the head of Onda no Hachirou Moroshige, an enemy warrior known for his great strength, is also real.[1]

Magic Resistance (B Rank): Cancel spells with a chant below three verses. Even if targeted by High-Thaumaturgy and Greater Rituals, it is difficult for them to be affected.[1]

Mad Enhancement (E Rank): Normally does not receive the benefits of Mad Enhancement. In exchange, one retains a normal capacity to think.[1]

Oni-kind Demon (B Rank): A skill that demonstrates her demon traits and power.[1]

Knowledge of Melee Combat (B Rank): A methodology regarding crowd-combat, in which friends and foes are all jumbled together. Not the ability to take command of a military force, but combat techniques to persevere as a single warrior within an army troop. Tomoe is well familiar with battles of many against many, one against all.[1]

Lineage Excitation (A Rank): A type of self-suggestion that Tomoe unconsciously performed while alive. Upon manifesting as a Servant, it has been defined as a skill that temporarily amplifies her powers as an oni kind.[1]

Archer of Inferno is a modified version of Tomoe Gozen appearing in the Shimosa Singularity who became a Heroic Spirit Swordmaster due to Caster of Limbo casting the Curse of Annihilation on her. Having her power been greatly increased, Miyamoto Mushashi comments that Inferno surpasses her in power just like any other Heroic Spirit Swordmaster. She is powerful enough to deflect Houzouin Inshun's spear with a single arrow.[5] Even when she's holding back, and Mushashi has access to Senji Muramasa's finest katana, Myoujingiri Muramasa, Mushashi only sees herself winning in one out of ten scenarios.[6]

She is also very skilled, able to wreathe her arms in fire and punch Mushashi, but most importantly, keeping her distance to fight at long range. However, she is unable to hit Mushashi due to her deflecting her arrows at the last moment with her Niten Ichiryu. Archer of Inferno claims that had she unleashed her flames more freely, she could have easily killed many.[6] In this form, she is also able to run extremely fast, and Danzou claims that anyone but her wouldn't be able to keep up with her speed.[7]

Magic Resistance
A
Riding
B+

Midnight of Summerside
A
VR Shinkage-ryuu
B+
Survival (Countryside)
B+

Shirabi is the character illustrator for Tomoe Gozen.[1]

Retrieved from "https://typemoon.fandom.com/wiki/Archer_(Fate/Grand_Order_-_Tomoe_Gozen)?oldid=163009"
Community content is available under CC-BY-SA unless otherwise noted.