Assassin's True Name is Mochizuki Chiyome (望月千代女, Mochidzuki Chiyome?). A woman of the late Warring States period whose name was recorded in the documents of Netsumura, Shinshu. She is regarded as a female ninja (kunoichi) that served the Takeda Clan of the Kai Province and a descendant of Mochizuki Izumo-no-Kami, but it is unsure whether she was actually a ninja.[1]

In a sense, her existence—it may be a sarcastic answer to the proposition called a “renowned ninja”, which is a contradiction for a ninja that should make a principle to keep one's activities covert.[1]

In this work, Chiyome is an existence endowed with grotesque powers, having inherited a curse cast by a god from her ancestor Kouga Saburou. At the same time that she works as a shinobi for the sake of her lord... she dedicates prayers as a single miko of a serpent in order to appease the aramitama of a god.[1] 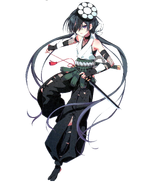 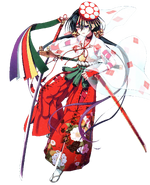 Assassin Stage 3 in Fate/Grand Order, illustrated by Hiroshi Hiroyama.
Add a photo to this gallery

Warring States/Widow/Young Girl/Kunoichi/Miko. Apparently, a few Servants are worried about her in regards to “having too many attributes”...[1]

Shimosa Province: The Stage of Rivers of Blood and Mountains of Corpses

Her Noble Phantasm is Summoning - Omen​ of the Great God Ibuki.

Hiroshi Hiroyama is the character illustrator for Mochizuki Chiyome.[1]

Retrieved from "https://typemoon.fandom.com/wiki/Assassin_(Fate/Grand_Order_-_Mochizuki_Chiyome)?oldid=114407"
Community content is available under CC-BY-SA unless otherwise noted.