People who rely on the gods, People who fight when things need done, Weak tasting food

Avenger (アヴェンジャー, Avenjā?) is an Avenger-class Servant able to be summoned by Ritsuka Fujimaru in the Grand Orders of Fate/Grand Order.

The Servant is in possession of a Saint Graph that is the aggregation of every possible Nobunaga from the past, present, and future. Although she is an exceedingly unique Heroic Spirit whose manifestation was made possible only in a certain peculiar space, right now, she managed to materialize here somehow.

Oda Nobunaga . The Nobunaga with the form closest to the original Nobunaga's Saint Graph. Strictly speaking that's not correct, but as a matter of convenience, that's how it is evaluated.

She's been summoned as an Avenger, but her condition is akin to when she is summoned as an Archer. However, the body that houses the karma of fear and resentment of multitudes of people inside it, can not be contained within the Saint Graph of a Heroic Spirit whose "origin is just a human" and with each successive ascension, even more possible Nobunagas are edified. A multitude of possibilities sounds good on paper, but the end result that awaits is her meaning as a person vanishing due to diffusion. Nobunaga herself is aware of it, but doesn't talk about.

"Well, how do I say this, don't you agree that I'm the most adorably cute even compared to the other mes? Actually, isn't the largest me scary?"

Oda Kipposhi. Kippoushi was Oda Nobunaga's name during his childhood. She's done many odd things as a child and was called a fool by her surroundings. The appearance of a brave young warrior that closely resembles her time as the Fool of Owari that was the most unprecedented and critical part of Nobunaga's life. The vigor rising in her body and the passionate blood surging within faithfully represents the soldier of fortune that was Nobunaga who cut through the era.

"Actually, at that time, I wasn't called Kippoushi. Nevertheless, since other than me, amusingly enough, Nobunaga is around too, it is easier to understand like this, no? Wahahahahaha!""

However, fundamentally, her form is not one that denies the gods and Buddha, but demonstrates Nobunaga's belief that "The possibilities of mankind belong to men, the gods and Buddha should be respected and not relied upon; do you guys just plan to depend on the honorable Buddha for everything?". That is what's "Innocent Monster"-like about her, however, her existence as the Demon King Nobunaga that became the enemy of gods and Buddha and imposes a severe life on all living beings is akin to that of the Tenma, even if she could be called a supporter of Buddhist teachings.

"I am Demon King Nobunaga────The enemy of gods and Buddha and all living beings, reborn by surpassing the Heaven of Pleasure."

Still, a point to make note of​ is that it's not like this "Demon King Nobunaga" is the pinnacle of Nobunagas. While it may be true that she's one of the most powerful forms born from the story known as "Nobunaga", that doesn't make her the "pinnacle", but the embodiment of the one furthest from the "truth"────the human-shaped flame that burns brightly on the other side. 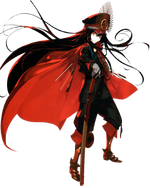 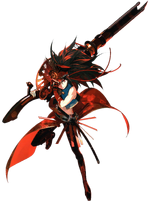 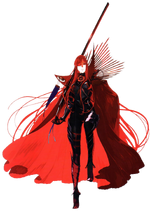 Avenger Stage 3 in Fate/Grand Order, illustrated by pako.
Add a photo to this gallery

As a new armament, she gained a mysterious arquebus, the Demon King Gatling Gun. Isn't this excellent and delightfully cool with its fuse that can do rotating rapid-fire? Incidentally, the weapon visible on Kipposhi's waist is the sword that she took from Imagawa Yoshimoto at the Battle of Okehazama, Sozasamonji. Her Noble Phantasm is Papiyas Metamorphosis.

It's Inevitable: A- A double-edged sword that burns oneself in exchange for the release of powerful magical energy. Is this the verdict handed down on herself that disappeared among the flames, or perhaps...

As if it Was a Dream: B Because of being under a constant assault of a correction force from the World due to her great power and mixed existence, Demon King Nobunaga is hollow as an existence and even her Saint Graph is faint.

Retrieved from "https://typemoon.fandom.com/wiki/Avenger_(Fate/Grand_Order_-_Nobunaga)?oldid=142707"
Community content is available under CC-BY-SA unless otherwise noted.