Ayaka Sajyou (沙条 綾香, Sajō Ayaka?) is the Master of Saber in the Second Tokyo Holy Grail War of Fate/Prototype. She is the main protagonist and younger sister of Manaka Sajyou.

Ayaka is a young teenager having medium long brown hair and blue eyes, she appears to be very beautiful without her glasses, which attracts the attention of Saber and Archer. She typically wears her uniform but her casual attire is of a purple-blue jacket, white blouse with shorts and stockings.

As a child, she wears pink cardigan and white dress 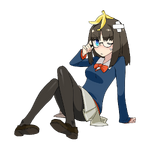 In the anime Profile

Ayaka appears to be a very insecure person, traumatized after the previous Holy Grail War after her father and sister died because of it, and not willing to join the current war. Unlike Shirou, she seems to come from a line of Magi and is more adapted to such a lifestyle, although she is also orphaned.

Her sister had been a genius in Magecraft, while she had been mediocre, leading to her developing a complex. Eight years prior during the previous War, her father had told her that sooner or later she too would be a participant in the Grail War, to which she would later scream to herself that she wouldn't do and would run away.

She had been directed by her father to perform a ritual sacrifice every morning, but due to her past trauma she has trouble killing living animals. Unable to kill pigeons she uses her own blood as a substitute. Because of this the Sajyou home's Garden Workshop has gradually become a pigeon nest that keeps growing. Also in part due to this her cooking comes only from ready made ingredients.

She has an attachment to crows. It is also said that removing and putting on her glasses changes her personality. In her eyes, Saber is the ideal prince along with his station as her protector.

She is hinted to have feelings for Saber and/or Archer.

"In my own self assessment, my character is the worst".

"I'll fight. Even though I can't do anything, to be able to choose to fight, even someone like me can do that!"

During the First Holy Grail War of 1991, Ayaka acts mainly as a bystander throughout most of the war due to her young age. She is for the most part unaware of her father's and sister's actions, and is only aware that they are involved in a ritual.

Ayaka still attends school during this period for the most part, but goes on break during the second half of the war. She also has a strict curfew during the first half of war. During the second half of the war, Ayaka is mostly confined in her home and is forbidden from leaving the house in order to protect her. Her primary duties at home is her magical studies and taking care of "Garden" which is her mother's botanical garden, but she often slacks off to watch TV after she has finished with her chores.

During the last stages of the war, Ayaka becomes targeted by Manaka out of jealously, due to Ayaka having a conversation with Saber, encouraging him to abandon his wish by telling Saber about how her mother had said that Garden was a representation of her, and how she had inherited her mother's wishes and love by inheriting the Garden that her mother had created for her. Manaka then later kidnaps Ayaka from her own bedroom with the intention of throwing her into the Greater Grail in order to feed her to the Beast.

After her father is apparently killed trying to prevent Manaka from killing her, Ayaka continues struggling to break free. However, despite Ayaka's best attempts to break free, she is about to be tossed into the Greater Grail when Saber impales Manaka from behind, saving her. Though, Ayaka faints from the blood. Ayaka is then targeted by the Beast, however, Saber saves her again by defeating the Beast.

After the Beast's defeat, a comatose Ayaka winds up in the Reiroukan's family's care after Saber leaves her with them prior to disappearing. She remains in their care until she wakes up.

Due to the shock from these events, Ayaka loses most of her memories of this period, and it is not known what her living status was like after her father's death.

She is the main character of the original Fate/stay night novel. It was felt that she would not appeal to the target audience of the visual novel, so she was dumped in favor of Shirou who was considered to be more appealing at the time. In Prototype it is revealed that her older sister Manaka Sajyou along with her father Hiroki Sajyou died eight years ago in the previous Holy Grail War.

What is not detailed is if she was aware that she was to be a sacrifice to the Grail in that war, as her sister had already offered their father before turning to her. As she was about to be sacrificed, she was saved by her sister's former Servant.

On the anniversary of her father and sister's death she would be pursued by Lancer much like Shirou had been. Similar to her counterpart, she would be saved at the last moment as her near death would summon her Servant, Saber.

During the new Grail War, she would also catch the eye of the Archer, who would propose to her, leading to one of the reasons he considers Saber to be his rival.

At some point she would also be poisoned, to which Archer would taunt his rival with the cure, a small vial containing a glowing liquid.

She would, like Shirou in the Heaven’s feel route, would lose her Servant after Saber is nearly beaten to death by Berseker. His master, Sancraid Phahn would corrupt Saber and take Ayaka's Command Seals for himself. It would be at this time that Lancer loses his Master, as the curse that had been placed upon Misaya finally kills her. Masterless, Lancer forms a contract with Ayaka and the two go to take on Berserker and the corrupted Saber, whom Ayaka wants safe and returned to her.

The final segment features Ayaka Sajyou calling Ahnenerbe as a lead in to Fate/Prototype.

Her alternate counterpart appears in Fate/strange Fake where she came to the United States and became a master participating in the False Grail War. Strangely another Ayaka Sajyou, who is also a student of Lord El-Melloi II, was confirmed to be in Romania which causes Lord El-Melloi II to be muddled on the identity of the dead ringer in America.

In Back Alley Satsuki, she is a gold heroine of rat to protect the first temple and she is known as Rat system Idol AYAKA (ネズミー系アイドルAYAKA, Nezumī-kei Aidoru AYAKA?).

Ayaka seems to practice an older form of magic according to Lancer. A type of dark magic, she seems capable of using black feathers like darts to attack her enemies, even causing Lancer to guard against them. She also showed the capacity to control plants, causing them to grow rapidly outside the green house door in order to bar entry.

She is a practitioner of general black magic, Witchcraft, however she finds herself unskilled in it. It would be later on during the war that Saber would suggest that she try using Formalcraft. Though not seen as very useful by common Magi, she finds she has an amazing affinity for it that normal Magi cannot use to the same degree. She is bad at cultivating medicinal plants, and, strangely, is close with crows.

She is the precursor of Shirou Emiya who was to be the protagonist of the original Fate/stay night novel that was never finished. She was originally detailed in Character Material, and she has been given an expanded role in Prototype. She is reused, in Fate/strange Fake, where she is again a master.

Retrieved from "https://typemoon.fandom.com/wiki/Ayaka_Sajyou?oldid=150065"
Community content is available under CC-BY-SA unless otherwise noted.