Like Angelica, Beatrice is a doll created by the Ainsworth family to serve as their servant. It is currently unknown if she was created from a previously deceased individual or not. 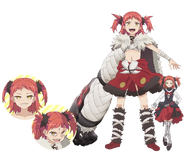 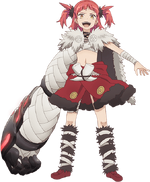 Beatrice is shown to be highly volatile to the point of potentially bipolar. Appearing to take great joy in violence, she tends to get irritated easily if people survive her onslaughts. She has a love of stuffed toys and Julian Ainsworth, but her girlish affection for Julian can quickly turn into a violent depression in which she rips the heads off of stuffed toys she steals from Erika.

Her primary weapon is the Berserker Class Card holding the spirit of Thor, the thunder god of Nordic mythology. The card grants her Thor's mighty strength and devastating lightning-manipulation powers.

The card's Include mode is initiated by merging with her right arm morphing it into the massive arm of Thor, easily twice her size, and grants her his great strength.

Install mode grants Beatrice Thor's attire along with his arm and Mjölnir. Install mode allows her to fully realize Mjölnir's power as lightning strikes capable of breaking even atoms, however the hammer's power is limited if she channels it indoors.

Retrieved from "https://typemoon.fandom.com/wiki/Beatrice_Flowerchild?oldid=106235"
Community content is available under CC-BY-SA unless otherwise noted.