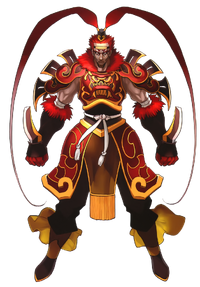 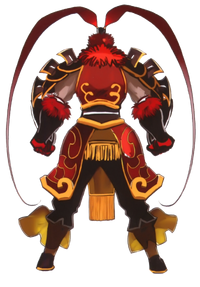 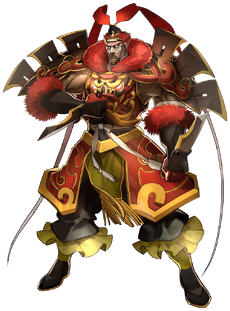 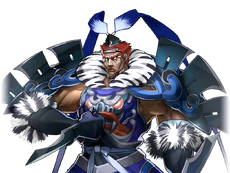 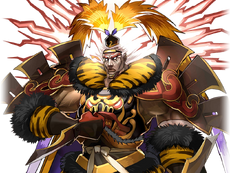 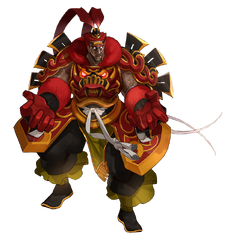 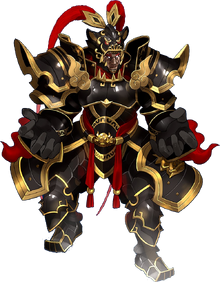 Betrayal, All kinds of martial arts[2]

Nature of a Rebellious Spirit
B[4]
Valor
B[4]

Berserker (バーサーカー, Bāsākā?) is the Berserker-class Servant of Rani VIII in Moon Cell Holy Grail War of Fate/EXTRA. He is only fought as an enemy Servant during the Rin route in contrast to Berserker of the Rani route. He is one of the Servants of Ritsuka Fujimaru of the Grand Order conflicts of Fate/Grand Order.

Berserker's True Name is Lü Bu Fèngxiān (呂布奉先, Ryofu Hōsen?), the General of Repetition (反覆の将, Hanpuku no hata?) of the Romance of the Three Kingdoms. He is an infamously treacherous military commander from the Three Kingdoms era. For two times he cut down his foster fathers, and to repeat the act of betrayal on countless occasions was an unbelievable act for the China that esteemed the Confucian morals. Still, his military exploits, deeds of arms are unmatched and he was counted as one of the strongest in the world of the Three Kingdoms.[3][5]

He betrayed Ding Yuan who appointed him to a high position and conspired with Demon Lord Dong Zhuo, who had grasped the central hegemony. But even Dong Zhuo was betrayed and assassinated.[5] He betrayed Dong Zhuo because he was crazily in love with Diao Chan (貂蝉, Chōsen?).[6]

Lü Bu excelled at shooting on horseback, and because of this gift he was likened to the expert of the bow of the Han Dynasty: the "Flying General" Li Guang. The time when the hero of the Three Kingdoms Liu Bei, who Lü Bu called his sworn brother, was cornered by Yuan Shu's military commander, Ji Ling is a man of great influence and Lü Bu's ally. As he did not like the fight between the two, Lü Bu commanded for a halberd to be erected at the camp's gate 150 steeps away. Both the Earth and Heavens aligned in perfect harmony. It was said that the arrow he shot hit the target beautifully and Ji Ling withdrew his army. This event is later called Gate Halberd Shot (轅門射戟, Nagaemon Shahoko?).[3][5]

After this, he wandered around Zhongyuan, going through many battles, but in the end was attacked and defeated by an opposing general, Cao Cao, due the betrayal of a subordinate. He was then executed.[3][5]

Lü Bu's selfishness was strong and he believed that there was no military commander in this world above himself, but it seems that he let his guard down towards the strategist Chen Gong, who made use of him "effectively" in his tactics until the end.[3][5]

Berserker has short red hair with red feathers on top of his head and white blank plain eyes. He wears a red Chinese general uniform including large armor and thick fur trimming at the collar and gloves. The color of Berserker's armor is blue and the fur is white and black striped at Stage 2, and at Stage 3 his fur is black with a yellow striped pattern. He appears strong and has a tall figure, his glittering armor reminiscent of a brave general.[6] Archer noted that Berserker is like a living fortress and it'll be extremely hard to break down his walls. He also explains that he is like a mobile fortress specializing in fighting against military.

As Berserker, his personality is seemingly emotionless, insane, and only obeying Rani's commands. His lines are all just incomprehensible yelling, so we don’t know what his real personality is like. It wouldn't be surprising for this Heroic Spirit to betray his Master but it is doubtful that Berserker would kill Rani as she looks similar to his wife in his lifetime.[6] However, he does display one glimpse of emotion when he saves Rani and Hakuno from the explosion, looking back and smiling as they are engulfed in light.

Because of Mad Enhancement, he has lost his reason and thoughts and there is never a time when his human nature is revealed. His tastes and preferences are unknown. Maybe he perceives all but himself as an enemy that must be destroyed, for there are also times when he leaves your control. One can gain more peace of mind and employ him when he is mad - a Heroic Spirit who is truly hard to associate with.[3]

In Extella, it is revealed that despite his Mad Enchantment, he retains his treacherous nature and desire for battle. His roars are translated, claiming that if Hakuno wishes to make use of him, to prove himself a commanding officer worthy of him. In Grand Order, his roars are further described, thanks to a dictionary provided by Chen Gong.

Mordred 「▅▃▃▃▬▬▬▅▃▃▃———!」 (Free translation: A superb courage! But a diminutive build! It can’t compete with me!)

Nikola Tesla 「▅▬▬▃▃▃▬▬▅ーーー ———!」 (Free translation: An extraordinary talented man, however meager! Give that electric power to me!)

Berserker was summoned by Rani VIII. Like with many of his class, he lacks intelligence and can only let out grunts and roars.

Regardless of the choice made by Hakuno Kishinami, they will fight Berserker when they interfere with Rin Tohsaka and Rani's battle.

If Hakuno picked Rin's route, Hakuno will save Rin from Berserker. Lancer stays and sacrifices himself to stall Berserker until Hakuno and Rin escape back to the school. Hakuno will eventually fight Berserker in the sixth round, but does not find out until halfway through the preparation period of that week.

Berserker will attempt to attack Hakuno from the school and into the Arena, leaving behind damage that clearly lacked any kind of control. Rani will also reprogram an effigy to possess Berserker's skills and use it to enter the Arena in her stead. It's not until Hakuno discovers the Noble Phantasm of her opponent's Servant that she realizes her opponent is Rani.

If Hakuno chose Rani's route, Hakuno's attempt to save Rani would make her lose control of Berserker. While Hakuno attempts to fend off Berserker's attacks, SE.RA.PH intervenes with it issuing a Rule infraction warning. Lancer used this opportunity to impale Rani's chest, Berserker tried to fight back until SE.RA.PH dropped a barrier. As Rani's energy core is about to explode, Berserker ran to the core shielding both Hakuno and Rani. As Berserker started to disappear, Hakuno saw Berserker smiled gently towards Hakuno and Rani.

Berserker and Lancer are revealed to have killed each other off during their fight on the sixth floor, accidentally damning their respective Masters to a state of no victor nor loser, shortly before the Moon Cell shut down.

Rani, or copies of her, were subsequently turned into a Demi-Servant that can use Berserker's power. Rani and Rin, who also possessed Lancer's power, struggled to find someone who could free them from stagnation.

Unfortunately, said someone could save only Rin.

Berserker returns, but this time as a selectable playable character for Hakuno Kishinami.  He's in Tamamo no Mae's party along with Medusa, Karna, and Elizabeth. His treacherous nature is an open secret among Tamamo's party, with only Tamamo herself being unaware of his true nature.

In his own side mission, some of Lu Bu's dialog is translated, revealing that he openly resents Tamamo and repeatedly proclaims his intent to one day crush her. At the end of his sidestory, he plans to finally strike out against Tamamo only to be stopped by Chen Gong, who suggests they instead bide their time and let Tamamo build up the nation for them first.

Lu Bu has been Oraclized by Karl der Große to be a member of the New Holy Empire.

If Hakuno's forces assault Mare Luxuria, Lu Bu is in command of Karl's forces there. He eventually appears to personally fight Hakuno's Servants once much of his army had been routed. He is subsequently defeated, and forced to retreat.

He returns later to guard Carolus Patricius's east gate along with Karna and Medusa. He protects one of the Karl Cannon firing upon Hakuno's forces, but he's eventually defeated.

Lu Bu is summoned in the "Septem" Singularity, along with Jing Ke, who he accompanies. They both serve Emperor Nero and before meeting Ritsuka Fujimaru and Mash Kyrielight, they had already killed three emperors of the United Roman Empire. Lu Bu fights as a part of Nero's army, being the second Berserker, the other one being Spartacus.

Lu Bu listens to The Phantom of the Opera as he laments about Christine and complains about Christmas. Then, when Santa Alter reveals herself to be Santa Claus, he becomes enraged along with The Phantom and attacks her with him and Darius III. After being defeated by Santa Alter, he regrets his behavior, and then is given a present by her.

Lu Bu is amongst the "Septem" Singularity Servant to aid Chaldea against Demon Gods Pillar.[7]

In his interlude Tiger and Wolf, Lu Bu acts a guard for Ritsuka and Mash, but Romani is concerned due to Lu Bu's legacy of betrayal. Then after they repel an enemy attack, Romani recalls that Lu Bu had sacrificed himself for a woman, and ponders on who the true Lu Bu is.

Lü Bu under Mad Enhancement has lost his reasoning in exchange for strengthening his parameter and lost a large function of his techniques. This Berserker also that has been impaired with all kinds of martial arts in his lifetime.[6] He is a land stronghold that has the qualifications for five Classes: Lancer, Rider, Assassin, Berserker and Archer. He wields a halberd called Houtengageki (方天画戟?, lit. "The Decrated Halberd that Matches the Heavens") and it is also his Noble Phantasm called God Force. Though most of the function of God Force has been lost due to his insanity.[8] After an Animation Update, he displays more usage of his weapons transformations, as well as erupting explosions from his body, and blasts from his torso.

His own horse Red Hare can become a Noble Phantasm but he couldn't use it in the Moon Cell Holy Grail War due to his current Servant classes.[5]

Nature of a Rebellious SpiritEdit

His personal skill; Nature of a Rebellious Spirit (反骨の相, Hankotsunosō?, localized as "Restless Soul" in Fate/EXTRA and "Defiant" in Fate/Grand Order) gives one the temperament of a lone wolf, unable and unwilling to settle in one place or serve one master. This person will never be able to follow greatness, yet is incapable of finding greatness on his own. This skill negates the effect of Charisma skills of the same rank.[1][3][5] The skill was sealed as this skill will very likely make him betray his Master. It is a rare example of using the correct characteristics of the Berserker class.[6]

Takashi Takeuchi originally drew Lü Bu. When Arco Wada took a first glance at the design, she knew instantly that it was Lü Bu without any explanation.[2]

In the early designs, Berserker would have him being a half human, half horse centaur, or even him as a mech which ended up too tough to work out, but in the end they had to go with the true-to-form pure ancient Chinese style Lü Bu.[6]

Retrieved from "https://typemoon.fandom.com/wiki/Berserker_(Fate/EXTRA_Rin_route)?oldid=153688"
Community content is available under CC-BY-SA unless otherwise noted.