Berserker's True Name is Arjuna (Alter) (アルジュナ〔オルタ〕?), also known as God Arjuna, he absorbed all the gods of the Hindu pantheon, except Kama, losing most of his humanity in the process and became the last god in the Indian Lostbelt.

Having severed his relation to the gods and being summoned as a single Heroic Spirit, as he is ascended, he regains his original humanity.

Arjuna has long, shaggy white hair and a dark skin tone. As he ascends, his appearance returns to that of his original self. 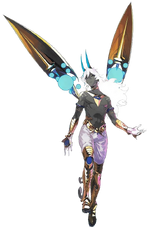 He claims that, because he has obtained everything, it is his duty to eliminate all evils and save the world. He is blissfully unaware of the evils inside himself however, and claims he is above judgement.

In Indian mythology, there exists a hero who is close to being an eternal god who ends everything and then starts over.

The one who inherited the authority of destruction from him is the Lostbelt Servant, Arjuna Alter.
As compensation, he began to lose his personality, but with his ego as a natural-born hero, he managed to prevent himself from turning into a mechanical being.

Originally, having lost almost all of his humanity, he conducted himself as a tool of perfect destruction.
As compensation for receiving divinity and the anti-evil skill as authority from "the one that brings about the end".

However, through repeated ascensions, Arjuna's humanity can barely be recovered.
In that case, Arjuna will appear in the form of a young man who's somewhat simpler than his Archer version.
Though as an Archer, Arjuna is a Servant fitting for his Master, there is a part that strains one's nerves, but in Arjuna Alter's case, that's missing.

To Archer Arjuna, that (Alter's) way of life is the idealized image of a hero, however, on the other hand, the Lostbelt Servant Arjuna longs for the nature of a proud hero that Archer possesses.

He reigned as a perfect god over the Indian Lostbelt.

Having his original personality painted over, he was on the verge of becoming exactly like a Deus Ex Machina...a concept with the sole purpose of putting the world through a continuous cycle of death and rebirth.

However, the personality presiding over Arjuna's egoism (his desire to win against a certain someone, his desire to become an outstanding individual, his detest for something to the degree that it made him want to get mad) that remained, ironically, helped him recover his humanity.
His wish of wanting to win against Karna this time...that desire itself is what managed to turn him back into a human being.

In the Indian Lostbelt, he went mad from absorbing the authorities of every god and became a concept that would show no mercy to even the smallest flaws, however, the only ones that the summoned version won't forgive are the evil beings that show hostility towards his Master, and even the calm nature that the Pan-Human History's Arjuna originally possessed is revealed from time to time.

pako is the character illustrator for Berserker.

Retrieved from "https://typemoon.fandom.com/wiki/Berserker_(Fate/Grand_Order_-_Arjuna_Alter)?oldid=140437"
Community content is available under CC-BY-SA unless otherwise noted.