The manager of the Twin Towers of Iselma.

In a literal sense, the creator of the Princesses of Gold and Silver.

As the Princess of Gold (that was originally Carina) said, Byron’s methods had become obsolete for the stage they had reached. Though Iselma’s results had taken a sudden jump, because of that jump, they had reached a point where they needed to rethink their methods.

Unfortunately, Byron’s lack of talent to be able to do so could be said to be the greatest reason for the tragedy that occurred there.

After the incident, Iselma’s magecraft was almost entirely abandoned, and Byron spent the remainder of his life like the cast off shell that it was…an all too common ending to the lives of modern magi.

Though it was mentioned in the story, the one who provided Byron the funds necessary to purchase the linden leaf, the one who guided all his moves, and the one who used the memory alteration spell to hide all of this, was of course Heartless. He believed that Iselma’s ritual of "aligning the lives of humans to the motions of the planets" was necessary for his own ends. 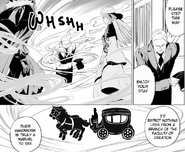