TYPE-MOON Wiki
Register
Don't have an account?
Sign In
Advertisement
in: Characters in Fate/Grand Order, Lancer-class Servants, Servants,
and 19 more

(referred to a male under the name Caeneus when alive. The name Caenis comes from the life they led as a female.)

Greek Mythology (The Metamorphoses, The Argonautica, The Iliad, Aeneid)

Caenis is the name of Caeneus (カイネウス, Kaineusu?) before she wished to become a man.[1] A warrior and tyrant found within Greek mythology. As a member of the Argonauts, Caenis went on many an adventure with the crew. Though once a woman, Caenis later became a man…. it has been said.

In the past Caenis was beyond a doubt a true woman, beauty renowned, and praised as one of the most beautiful maidens in Thessaly. At one point after turning down numerous courters, Caenis received the love of the sea god Poseidon (Neptune) and also lost the chastity once held. Satisfied, the sea god said, "I will grant all of your wishes" to which Caenis replied, "Please make me no longer a woman so that I will never have to go through an experience like this ever again" and Caenis became an invincible man, the legend says.

It cannot be said for sure that Caenis actually became a man due to some tales left behind. After death in one story, is said to have become a bird with golden wings and disappeared into the skies, but there is also a tale that the corpse of a woman was left behind. Either way, the subsequent Caenis/Caeneus became a mighty warrior and showed the world a powerful tyrant that could rule the lands.

At the end of life, Caenis turned into a magnificent bird with golden wings. In Caenis’ current appearance that same tale has intertwined into a Noble Phantasm, however, there is a chance of the special trait of being able to change appearance at will going out of control. This tale may be the source of why Caenis’ appeared in a female’s body and also why Caenis’ body has animal characteristics.

Although she currently has the physique of a woman with a more masculine face, different characters refer to her with both types of gender pronouns. Kirschtaria and Kadoc Zemlupus use male pronouns, while Ophelia Phamrsolone uses a male pronoun but corrects herself to a female one.

As Caenis’ ascension progresses further and further, the Noble Phantasm which consists of Poseidon’s protection and blessing becomes more and more present. From this Caenis becomes closer and closer to regaining the form held when once alive. In other words an unparalleled existence with a magnificent suit of armor that reminds us of Poseidon.

Furthermore, Caenis’ spirit origin was formed with a massive increase in power that was a result of Poseidon’s favor. Already at a point beyond what is a Heroic Spirit, Caenis has appeared as a Divine Spirit before us. In addition to whether Caenis literally became physically male in human history or not, Caenis's gender on a personal level is unclear. On one hand, it seemed as though she was frankly disappointed by not being summoned into her male saint graph; likewise, Wodime uses male pronouns for her. However, her dialogue with Da Vinci indicates she does not relate to the idea of transitioning in gender to make one happier with their overall self, or found it strange. Finally, the datamine places Caenis's gender as unknown; it isn't certain if this is literal or has to do with her broader saint graph. 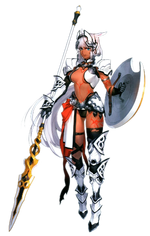 "What I hate is the ocean. What I hate is God." Though holding enough anger to have aptitude as an Avenger, Caenis usually does not feel anger in such a way. When in a good mood, you can see a bright smile on Caenis' face and even if Caenis is not in a good mood, if you try to start a conversation, you'll get an answer while going along with any sort of idle banter. Having a sweet tooth, Caenis would definitely be beyond pleased if the subject were to come up!

However, once the anger found within has been set ablaze, it is beyond uncontrollable. Even becoming willing to kill Master, and at times entering a frenzy that rivals that of a Berserker.

The reason why Caenis, who hates, scorns, and loathes every deity, served obediently, wasn't only due to Wodime's exceptional charisma. Wodime told Caenis in detail the truth of his intention, "the reorganization of the Age of Gods".

Turning all the humans into gods and reorganizing the Age of Gods――― In short, the gods of olden times would all lose their way of being. Of course the ancient gods of Greece too, and the target of Caenis' fury, the sea god Poseidon as well!

"Sounds good, it's the best settlement!"

Caenis greatly supported Wodime. In that case I will display the protections and blessings of the sea god that are endowed in this body as a Noble Phantasm to their fullest!

Caenis, not unlike perhaps Mordred, has a brash demeanor, a short temper and a sharp tongue; however, she also has a more brutal background and expresses it with various types of physical threats. In Anastasia, if she was not putting up an affect, this was also sexual in nature. She is also brutally honest at times, such as saying that because Musashi is a similar person to her, she must also be for the same reason a bad person. Indeed, reflecting the vices of bronze-age Greek heroes, it seems at first that Caenis is a "might makes right" tyrant character. Being a victim of tyranny and the gods, while also bestowing tyranny and using the powers of Poseidon, Caenis is empowered by everything that has harmed her, and it may account for her emotional and dangerous tendencies.

There are, however, limits to this, and her excitement if you summon her post-Olympus indicates a much friendlier side - at least among those she considers comrades. In reference to Mordred, what they have in common makes the both of them get along, even as training partners. Caenis also adheres to principles of Xenia, the essential Greek value of hospitality. Finally, it seems as though Caenis deeply respected her master and his greater vision, and in turn was quite loyal to him; even after being summoned by Ritsuka she has to remind herself that Kirishtaria is no longer her Master. At bond level five, it appears that there is a hidden frail side that is still in pain from her past trauma with Poseidon, and likely the closest thing to her original feminine character.

Caenis is a Servant under Kirschataria Wodime, implied to have earned her cooperation by defeating her. Kirischtaria sends her to observe the "Anastasia" Lostbelt, in case Kadoc is unable to handle the situation with Chaldea.[1]

Caenis later meets with Kadoc and Anastasia, provokingly questioning if Kadoc is able to handle the burden of raising the Lostbelt. Kadoc, however, is confident in his abilities, believing that he and Anastasia will be the victors in the end. Caenis is convinced by Kadoc's answer, promising to tell Kirischtaria that he is doing fine and also noting that the King of the Russian Lostbelt is truly a top-class monster on par with the chief deity under Kirschtaria. Caenis also asks about Chaldea, with Kadoc saying that they have appeared and he will deal with them. Caenis then leaves, presumably returning to Kirischtaria.[2]

Caenis appears in Scáthach-Skadi after the latter ceased the fight between Ritsuka's party and Sigurd. Frustrated she hasn't killed anoyone in the last few months, she decides to kill Ritsuka, impressed that they killed Ivan the Terrible. Napoleon Bonaparte defends them and he is defended by Sigurd as Skadi doesn't permit killing. Caenis is ready to fight Sigurd when she realizes his true identity. She then delivers Kirschtaria's message. Following the message, she threatens to kill Skadi when she nearly recounts Poseidon raping her. Ophelia demands she return straight to Kirschtaria, having heard a number of Heroic Spirits from Proper History had appeared in that Lostbelt's ocean with Poseidon gone. Caenis agrees to return to the Atlantic Lostbelt, saying she needs to check in on Artemis. She expects Ritsuka and Mash to succeed and have grown stronger when they next meet.[3]

As Surtr heads for the northern mountains with Ophelia on his shoulder, Caenis expresses disgust and disappointment that someone like Ophelia is a Crypter. Annoyed by the whole situation, she prepares to return to the Atlantic Lostbelt. She finds it unbelievable that Skadi allowed Surtr to resurrect, but Koyanskaya say Skadi's inability to conceive of his resurrection is why the Lostbelt was pruned. Though Koyanskaya doubts Skadi would have do anything about him even if she knew of his relation to Sigurd. Caenis wonders if Skadi is the type to let nature run its course of if she pities Ophelia. Koyanskaya comments that Skadi's way of thinking limits the Lostbelt's potential. She then leaves, expecting to Caenis again in the Atlantic Lostbelt. Caenis comments that Koyanskya thinking herself as irreplacable just means she'll die sooner than she realizes. She tells the absent Koyanskaya not to assume every Lostbelt is on her side, calling her "pet."[4]

Atlantis: Ocean in the Age of Titans

Being a Heroic Spirit that became a Divine Spirit after receiving Poseidon's Authority,Caenis is a formidable Servant. Kirschtaria Wodime claims that if Ophelia Phamrsolone dared offend her, she'd destroy her Lostbelt, king and all.[1] Ophelia doubts it, and although it is beyond her capabilities to keep a Divine Spirit such as Caenis in check,[5] she states the power of her Lostbelt King is easily a match for a Divine Spirit's. On top of that, she also claims to have the strongest knight to ever live at her disposal, and she says that she can't imagine either of them having anything to fear, even from Caenis.[1]

Her armaments are a large-tipped Spear and a Shield. She can slam her shield into her opponent in a punching motion to damage them. Due to possessing the Authority of Poseidon, she's able to attack with torrents of water from her spear and simply by shouting.

Caenis is strong enough to block Napoleon's blasts with just one hand without feeling any pain. She also possesses the Authority to cross between Lostbelts in order to inspect them.[3] At some point, Caenis was bested in combat fair and square by Kirschtaria Wodime.[1]

Riding
EX
Divine Core of the Sea God
B

Azusa is the character designer for Lancer.