God of Medicine
EX
Son of Apollo
A
Ophiuchus
B

Caster's True Name is Asclepius (アスクレピオス, Asukurepiosu?) is a hero of Greek myth who studied under Chiron and later became known as the “God of Medicine”. He was also a member of the Argonauts led by Jason.  Being a child of Apollo, he eventually gained the power to resurrect the dead, which was viewed as a problem, and thus he was struck down by godly thunder. Apollo consorted with a woman named Coronis and sired a son.

However, a crow spoke to him of her infidelity (a lie it had made up), and in his rage, he killed her and changed the formerly white wings of the crow to black. But Apollo, regretting having killed Coronis, took the child (Asclepius) from her body which was on the verge of cremation, and entrusted him to the wise centaur Chiron to raise.

Asclepius studied medicine and hunting under Chiron, but eventually became more talented in medicine than him.

The healing art that came from the blood of Gorgon given by Athena gave rise to the medicine that was able to resuscitate the dead. However, if one is able to overcome death, the inherent value of the realm of the underworld becomes lost.

Feeling a sense of impending crisis, the God of the Underworld, Hades, went to Zeus to request a favor (as Asclepius was a child of Apollo and he could not interfere directly), and Zeus struck him down with a bolt of lightning. In order to quell the anger of Apollo, whose son was killed, Zeus pulled the dead Asclepius up into the seat of a god (Ophiuchus). 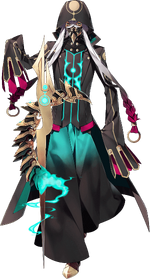 Caster Stage 3 in Fate/Grand Order, illustrated by Taho.
Add a photo to this gallery

Asclepius is briefly mentioned in that a piece of the Argo could act as a catalyst to summon him as a Servant.[1]

Asclepius appears as one of the shadow apparitions of Watcher, taking the form of a young boy.

Taho is the character designer for Asclepius.

Retrieved from "https://typemoon.fandom.com/wiki/Caster_(Fate/Grand_Order_-_Asclepius)?oldid=145732"
Community content is available under CC-BY-SA unless otherwise noted.