A relaxing nap in gentle sunlight

Caster's True Name is Geronimo (ジェロニモ, Jeronimo?). Geronimo is a warrior of the Apaches, one of the aboriginal people from the North American continent. Originally owner of a carefree name that meant "the one who yawns" in the Apache language, his life completely changed when he was 20 years old. Upon having his wife and children slaughtered by Mexican soldiers, he made a bold speech and carried out a revenge against the Mexican army as a "warrior".[2]

Ever since the panicked Mexican soldiers shouted "Jeronimo!" (St. Jerome, a saint who was widely known for having fought like a lion) while referring to him, his name changed to Geronimo.[2]

It was probably in the battle right before the third surrender that his reputation raised the most. Facing a number of soldiers that outnumbered his own forces manyfold, Geronimo attempted to assassinate their commander all by himself and succeeded in doing so. In addition, it has been said that such commander had given instructions to "annihilate the Apaches".[2]

By no means Geronimo was just a savage, cruel person. He was also calm and prudent. Although willing to surrender, he would never throw away his pride. In order to capture Geronimo and the 35 Apaches he lead, the American government mobilized over 5,000 soldiers.[2] 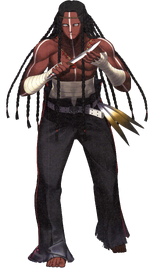 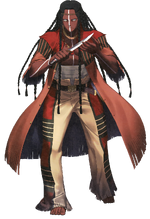 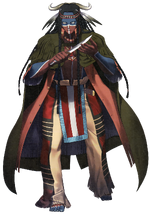 Caster Stage 3 in Fate/Grand Order, illustrated by Mineji Sakamoto.
Add a photo to this gallery

An intellectual, he speaks in an extremely indifferent tone of voice. Possessing a lawful way of thinking, he kept a calm position in any situation. He will probably come in contact with the Master in a courteous manner. However, nothing can be done once he is angered for real. He was not called a red demon, feared by all soldiers, just for show.[2]

Geronimo is the leader of the Resistance, that opposes both the Celtic and American armies. He encounters Ritsuka Fujimaru, Mash Kyrielight, and Florence Nightingale, accompanying them. Later, Geronimo, along with the other Resistance members Robin Hood, Billy the Kid and Nero, split off, intending to assassinate the leader of the Celtic army, Medb. They plan to use Robin's Noble Phantasm, No Face May King, to sneak up on her and then isolate her with Nero's Noble Phantasm, Aestus Domus Aurea. However, they are attacked by Cú Chulainn Alter and Arjuna, who serve under Medb. Geronimo orders Robin to escape while they stay behind to stall the enemies. Despite managing to keep up for some time, they are eventually defeated, with Arjuna killing Billy the Kid by reflecting Geronimo's Noble Phantasm, Tsago Degi Naleya, at him and Cu Chulainn overpowers Nero even in her Aestus Domus Aurea. Before his death, Geronimo predicts that Medb will die soon, causing her to finish him herself.

Geronimo is amongst the "E Pluribus Unum" Singularity Servants to aid Chaldea against the Demon Gods Pillar.[3]

Geronimo was asked by Da Vinci to advise Chaldea about the singularity occurring in Salem. He tells them that Salem is a cursed land filled with whirlpool of grief. He refuse to be part of Ritsuka's expedition party, claiming he would expose dangers to his friend. He was highly against the idea of Mash accompany Ritsuka to Salem.[4]

When Ritsuka and his party rayshifted to Salem, he wondered if it was a good idea to let Mash go. He was surprised to learn that somebody has outmaneuver Medea.[4]

When Ritsuka was dreaming in the Lostroom, he'd witnesses Galahad defeating Geronimo, Kiyohime and David.

Although a magus, he has no connections to the Mage's Association and, rather, is closer to a Spellcaster. With his skill Shamanism, he can form contracts to borrow the powers of various spirits. With his magecraft, he can both create and destroy bounded fields, and is also capable of hypnosis via the use of cigarettes. He comments that despite his bounded fields being relatively crude in design, they are still high power, and can surpass bounded fields that are otherwise more intricately designed. Despite being summoned as Caster, Geronimo boasts a martial story improper for a Caster. His Personal Skill, Bloodstained Demon provides great bonuses to close-range combat power, since he possesses proficiency with the bow, spear and knife.[2]

It has been said that he - who not only was an excellent warrior, but also burned with desire for vengeance more than anything else - fought to the bitter end against the Mexican soldiers with a single knife, even after his spear broke and his arrows ran out, while he became red with his own and the enemy's blood.[2]

Yuuichirou Higashide is the scenario writer for him in Fate/Grand Order.[1] Mineji Sakamoto is the character illustrator for Geronimo.[1][2]

Retrieved from "https://typemoon.fandom.com/wiki/Caster_(Fate/Grand_Order_-_Geronimo)?oldid=153101"
Community content is available under CC-BY-SA unless otherwise noted.