Caster's identity is Gilgamesh, the supreme wise king who returned from the journey of immortality. In legends, he has been described as “the one who saw everything”. At times ruthless, at times approving of human nature; the great king of Uruk who strictly led the masses.[2] Upon returning from his search for immortality, he found Uruk in a decaying state due to his negligence. Since then he has dedicated himself to repairing and maintaining his kingdom, assisted by the chief priestess, Siduri. 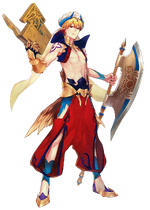 Caster in Fate/Grand Order -The Absolute Demon Battlefront Babylonia- anime.
Add a photo to this gallery

As a Caster, Gilgamesh has a more mature mindset, he comes from after his journey to find immortality. In this form, he is considered as a wise king by the people of Uruk.

Differently, from when he is an Archer, his way of being in this form is not of a hero that personifies raging power, but that of a wise king that governs the masses.[2]

Mankind's oldest hero, the King of Heroes Gilgamesh. Why does he manifest as a Caster? Pulling out countless numbers of magic wands from his Noble Phantasm "King's Treasure" and unleashing various forms of attacks; that figure of his certainly appears like that of a magus, but in practice, it is far different from a magus who compiles magic reaching towards the mystery of the world. He is also quite different from the author type of Casters that write of words that compose into poems or novels and fold into a book their very own worlds-----That figure of his, is so to speak a magus in shape only.[1]

There was an opinion left in the Chaldea leftover unofficial records:
"I think that's probably just his own insinuation. You can call it a sneer. He understands. What the true nature of the King of Magecraft who advanced the incineration of Human Order is. ....No, not just the King of Magecraft. I'm sure he...."[1]

As a matter of fact, his attitude towards the Master does not appear to be much different from that as an Archer, but...
There is a majority opinion among the staff members of Chaldea that manifesting figure of his is not a severe one towards the Master.

Nero/Nero Bride
"Indulge Flamboyantly or spoiling yourself is fine and all, but save up sometimes! you best be noted that only infinite wealth can be allowed to exist in my treasury!
........... No, I didn't say it is fine to aim for reaching the level of my treasury"[1]

Babylonia: The Absolute Frontline in the War Against the Demonic BeastsEdit

He appears in this Singularity as his living self. Months before the crew of Chaldea arrives, when Solomon sent a Grail to Mesopotamia, Gilgamesh's clairvoyance showed himself standing in ruined Uruk with all of his subjects dead. Realizing doom is inevitable, he set out to fortify Uruk and gather enough materials to build the North Wall, the Absolute Frontline, to ward off encroaching demonic beasts as well as a hidden breakwater. In order to prevent the future he saw, he also sealed Bab-ilu and became a magus, summoning Merlin with seven other Servants. Though he made clear to his subjects that no one will survive after six months, the citizens still followed his war effort.

When Merlin brings Ritsuka Fujimaru, Mash Kyrielight and Anna to him, he is unimpressed and declares the problem at hand should be solved by people of the contemporary era. However, after they have helped out in the city for nearly a month, he starts tasking them with missions regarding the war.

In a failed attempt to evacuate the city of Nippur, Tiamat-Gorgon breaches the North Wall, killing Leonidas and presumably Ushiwakamaru, only delaying her siege of Uruk for ten days, due to being cautious against the other two Goddesses. To turn the tide, Gilgamesh tasks Fujimaru to bribe Ishtar into an alliance, who is later revealed to be protecting citizens in her own way and is in fact not part of the "Alliance of the Three Goddesses".

He then sent Fujimaru to Eridu, to deal with the suddenly attacking Quetzalcoatl and obtain the Axe of Marduk. Fujimaru soon realizes Quetzalcoatl is actually protecting humans and allies with her. At the same time, Ereshkigal takes advantage of Gilgamesh's overworking and reaps his soul to the Underworld. He is ultimately rescued by Fujimaru and gains Ereshkigal's alliance.

After Tiamat-Gorgon's defeat and the awakening of the real Tiamat, he devises the plan to lure Tiamat to the Underworld, where nothing is alive and thus Tiamat can supposedly be killed, and attempts to buy time for Ereshkigal to finish her trap. The plan is successful, at the cost of the remaining five hundred citizens and his own life.

At the climatic battle against Tiamat, he reappears as an Archer-class Servant and aids Fujimaru and Mash in defeating the Primordial Goddess.

In Olgamally Animusphere dream, Gilgamesh and Archer launched a combination attack against her. Olga orders Caster to attack Gilgamesh.

Upon arriving the destination, Gilgamesh lost all of his memory because of a surprise attack from BB. Although He can't remember his own name and identity, Gilgamesh didn't forget his rich ,calling himself ”Gorgeous P”. He hired Sheba  as his secretary, and D'eon  was appointed to be his bodyguard. He didn't hire Astolfo  who he thought to be a troublemaker.

As an investor, Gilgamesh participated in the event. During the period, He took an interest in the doujinshi” Our Round Table ”and suggested adding a new character ”The Oldest Prince”,who one day becomes Lion King lily’s home tutor and develops a romantic relationship with his student.

In the end, deeply moved by the doujinshi created by Jeanne Alter , Gilgamesh finally got his memory back. He announced that Jeanne Alter was the champion, deciding to publish her work.

In this form, Gilgamesh is no longer in his prime, and as such, he gets overpowered by Kingu who may have been even stronger than the original Enkidu.[3] Differently from when he is an Archer, his way of being in this form is not of a hero that personifies raging power, but that of a wise king that governs the masses.[2] While he boasts a vast amount of Magical Energy, his body is not as sturdy as that of a Servant.[4] Not even him would be able to simultaneously maintain the Spirit Origins of four servants at once as even supplying Merlin almost drained him dry. Gilgamesh is proficient in summoning, and after learning about the Holy Grail War from Merlin he went crazy, summoning seven more servants to fight in the Demonic Front. The reason why he isn't on the front lines throughout most part of the Babylonia Singularity is partial because he hadn't recovered all his magical energy.[5]

The servants he summoned are unique in that they only required Gilgamesh's mana to be summoned, and they then gather their own mana to stay in physical form by eating and sleeping like humans. They also survive by taking in mana from around them as it is abundant in Uruk due to being in ancient times.

Because he is attempting to protect his back even more than when acting as the King of Heroes, his meagerness during combat has drastically increased.[2] He fights with various Mystic Codes drawn from his treasury and a large axe. He mainly utilizes long-ranged attacks.[1]

Gilgamesh claims that by hiding shadows, holding his breath, and meditating, he's able of activating EX Rank Presence Concealment, allowing him to evade the gallu spirits of the Underworld. The level of credibility of this statement is questionable.[6]

Item Construction (False) (A Rank): A Skill to produce devices that carry magical power. Since he is not a magus, Gilgamesh originally would not possess this Skill, but he has an ability equivalent to it due to the existence of Gate of Babylon. All tools that can be created (that can be retrieved from the Noble Phantasm) are “items inside the Babylonian treasure vault”.[1][2]

Territory Creation (A Rank): Not only producing tools as a magus, he can even pull off the construction of buildings. To begin with, the citadel of Uruk was designed by Gilgamesh. There are limits to constructions of just clay and stone, but even as he murmurs “Needs more lumber. Seems like I’ll have to go to the cedar forest...”, the king still doesn’t feel like going to the cedar forest due to the matter with Enkidu having a lasting effect on him.[1][2]

Divinity (B Rank): Originally he possesses the highest Divinity rank of A+, but due to him not harboring any good impression in regards of the gods, the rank declines.[1]

King's Return (A Rank): The wise king who had returned from his journey for immortality, growing as a king. Increases star generation value to all allies.[1]

Golden Rule (A Rank): The wise king who had returned from his journey for immortality, growing as a king. Increases star generation value to all allies.[1]

Charisma (A+ Rank): A wise king, who was said to be the most outstanding king of all. He possesses an extremely high charismatic nature that is almost like a magical power or a curse..[1][2]

Sovereign of Magical Wands (EX Rank): The Skill that denotes Gilgamesh’s way of being as a Caster that manipulates various mystic codes. Grants bonus to magecraft-type attacks. He will handle tools with care in case of fighting while being mindful of them. He was such a king.[1][2]

Fundamentally the same Noble Phantasm he possesses as an Archer. By connecting the space around him with Babylon, he pulls out an innumerable amount of magic wands and mystic code and utilizes magic. In the magic wands and mystic codes, the great thaumathurgy of the age of the gods is loaded. Due to the display of effects and invocation that mostly does not consume the user's magic energy, it is a Noble Phantasm that excels in its extraordinary cost performance.[1]

A long-range bombardment from the citadel of Uruk. A prodigious cannon fire that concentrates not only Gilgamesh’s own, but also the total force of the people of Uruk that lived in the Age of Gods.[2] In Fate/Grand Order, after the entire attack on the enemy, it has the effect of increasing his allies' defensive strength.[1][2]

Spreading through the corners of the earth just like the radiance of a star, he sees through everything; the oldest of heroes, the King of Heroes, Gilgamesh. This is his spirituality, turned into a Noble Phantasm. He sees through be it the enemy's True Name or Noble Phantasm, or even the truth concealed in multiple layers by simply a glance. Normally a continuously active Noble Phantasm, but in FateGO its True Name release is not performed.[1]

Ginka is the character illustrator for Caster.[1][2] Kinoko Nasu is the scenario writer for his character.[1]

Retrieved from "https://typemoon.fandom.com/wiki/Caster_(Fate/Grand_Order_-_Gilgamesh)?oldid=161198"
Community content is available under CC-BY-SA unless otherwise noted.