Those who don't value books

Caster's True Name is Murasaki Shikibu (紫 式部?), a Japanese novelist, poet and lady-in-waiting at the Imperial court during the Heian period. She is best known as the author of The Tale of Genji, written in Japanese between about 1000 and 1012.

Murasaki is gracious and eloquent woman in appearance, curvaceous with her large chest as the most prominent feature. From the little exposed skin, she appears to be rather pale.

Matching her name, her eyes are deep purple. Her incredibly long hair is brown, and splits into multiple long strands that curl rather unnaturally. She has bangs over her forehead, and hairbands decorated with large blue orbs with a purple spiral, tie her hair into cute, ear-like buns.

Her outfit is a beautiful gothic-style dress, the colors consisting mainly of black with blue and purple as complementary ones. The dress's skirt has a spiraled frill all around it. The torso is similar to a corset. The shoulder cloths are large and baggy, and the sleeves are large and open. The under-chest area is clad in the same material as that of the torso, while the over-chest is composed of a brown material. The dress goes up to her neck, and it possesses an ornamental amethyst over her sternum. On her hips are a blue ornament with a purple spiral, attaching long black and blue strips of cloth to her body. She wears a blue purse with a white diamond pattern tied around her waist by a string of beads. Murasaki holds a black umbrella with a blue underside with her right hand.

In her second Ascension, the umbrella is discarded. Murasaki now wears a pair of black rimmed glasses over her eyes and a chessboard-patterned cloak with wide sleeves over her body. Around her upper body is now a purple rope tied around her.

In her third Ascension, Murasaki changes radically. Her hair goes from brown to black and the curls disappear, growing incredibly long and bending upwards like a wave. Her dress is replaced by a multi-layered, multi-colored kimono, consisting of the colors: pink, red, orange, green, and many shades similar to those. Her glasses disappear, and now a glowing purple insignia floats above her head. One of the long skirts of the layers of the kimono resembles a paper fan. She now holds a fan in her right hand, depicting a bonsai tree. 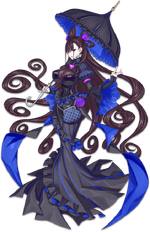 Rider Stage 4 in Fate/Grand Order, illustrated by Raita Honjou.
Add a photo to this gallery

Murasaki attempts to portray an air of elegance, though she is quite clumsy. She deeply enjoys reading, especially books that were written outside of her native country and time. She resents the existence of digital books and prefers paper books. She also holds a fair amount of respect for fellow authors.

Murasaki is first mentioned by Trstan in an offhand remark.

A Study in the Dubious Meiho-souEdit

Murasaki conducts a play featuring various Servants as actors. When an amnesiac Servant stumbles upon them, Murasaki agrees to let him join and gives him the name "Salazar," which is the name of his assigned character.

As director and scriptwriter, Murasaki is essential to the production of the play. However, Murasaki suddenly collapses after drinking a glass of grape juice. Suspicion immediately falls on Salazar as he was the one to serve the drinks. The film assistant, Moriarty, confesses to preparing the drinks himself but he denies poisoning Murasaki. Holmes appears as a hologram to inform the group it was an accident.

As the other Servants resume the play with some minor changes to the script, Salazar eventually discovers his true identity: the pirate Bartholomew Roberts.

Verse of the Great Poet (Rank A): is one of the Personal Skills of Caster. It acts the same as another skill among the Caster-Class, High Speed Incantation. However, its abilities vary, it allows the user to write at an acceled speed, but in order to use it, the user must also 'speak' in some form.

Witchcraft (Lyric) (Rank D+): is a lesser-scale Witchcraft skill. While it does not directly use influences from Japan, it allows ones own words to be used as a form of Magecraft. It is not known about the direct-degree of which this skill preforms, but it is known her personality heavily limits this skill.

The Diary of Lady Murasaki (Rank B): acts as a 'repertoire' of knowledge for Caster. From the Heian Peroid, the knowledge is collected. It is said this skill directly affects her library, storing it with the general books she had taken inspiration from. Whether it be love novels, drama, or merely a small book of fables, she never seems to run out of sources to inspire her.

Retrieved from "https://typemoon.fandom.com/wiki/Caster_(Fate/Grand_Order_-_Murasaki)?oldid=161778"
Community content is available under CC-BY-SA unless otherwise noted.