Obtaining things for a low price and parting with them for a large sum (this is not exclusively about commercial products), Pretty bottles of perfume, Dromedaries, Camels

Treasures (including people of talent) gathering dust in storehouses, Predicting the future of people close to her, Bactrian camels

Caster's True Name is Queen of Sheba (シバの女王, Shiba no Joō?). The legendary queen that anyone would have heard of at least once. Till today, she remains a mystery, shrouded in enigma.[1]

She is mentioned in the book of 1 Kings of the Old Testament, and in the New Testament. An enigmatic queen ruling over the "Kingdom of Sheba", located south of Jerusalem. However, there is no precise evidence to ascertain the existence of the Queen and her kingdom. At one of the kingdom's possible sites, Ethiopia, there is a wondrous national myth that the Queen of Sheba and King Solomon wedded, and the Queen became the matriarch of their first empire.[1]

Both her ears and tail feel velvety and fluffy. An uncertain existence like a mirage; no, it is perhaps for that reason, that the Queen of Sheba is recorded as a "Peerless Beauty" in many legends, rivaling the majesty of King Solomon himself. Yes, she is indeed a beautiful woman, but for some reason, there's a rather unfortunate vibe to her...  of course, no one can understand.[1]

Also, many regions have legends about her having an inhuman figure. Arabians said “the Queen had furry legs and donkey hooves”, Southern French said “her feet were webbed like a goose’s”, etc. The correct version is the story that says that she is the daughter of a djinn woman and a human man. It’s also believed that the Queen possesses a shapeshifter’s power to have a variety of appearances, as if she were a light-refracting lens. 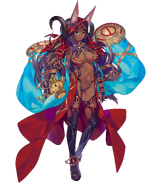 Caster Stage 3 in Fate/Grand Order, illustrated by Katou Itsuwa.
Add a photo to this gallery

First, she is one who thrives on prosperous business. There is no tolerance for greedy, pointless expenditure. Profits dealing with money and treasure; they are the very blood and breath that circulate through her mind and body. She very much lives and breathes money, treasure, business connection, and get-rich-quick schemes. Even so, the act she puts on is intentional, having seen into the future, and one must bear in mind that all of this may also be a possible sham.[1] An optimist with a calm and carefree demeanor. Except she’s very predatory when it comes to money. She remembers clearly what people said ages ago and brings that up again the most critical moments.

She has a self-deprecating side regarding how, contrary to her glamorous legends, her own past was nothing but modest. And she strongly values modest stories of everyday life. She has powers of future precognition, originated from her djinn bloodline. It’s implied that her meeting with Solomon in the legends was actually an intense mentally draining Clairvoyance vs Clairvoyance battle, where they would go through the three enigmas adapting to what was becoming settled as the future and the past.

Likes: Obtaining things for a low price and parting with them for a large sum (this is not exclusively about commercial products). Pretty bottles of perfume. Dromedaries.

Dislikes: Treasures (including people of talent) gathering dust in storehouses. Predicting the future of people close to her. Bactrian camels.

Motives and attitude towards MasterEdit

When dealing with her Master, she’s fully respectful to the relationship in their contract and finds this very refreshing. If their deepening bonds eventually cause any changes in the Queen’s heart, those will be too minor to be noticed.

Shtayim: When her shopping adds to 889 yen, she gives the cashier 1444 yen without a word.

Shalosh: She sleeps in camel pantaloons. Sheba: Those are lumpy roompants-!

David: Da…! Da!! You’re a king, stop playing the carefree shepherd. It takes a lot of nerve to be summoned and take the earnings without working-! It just gets more annoying because he’s half competent-!

Abigail: Lately she’s been less and less prone to calling me by the wrong name. Although that’s a tiny bit sad… I’m sure it’s for the best.

Gilgamesh: I’m the mysterious sexy secretary Dollarcent Pound! Whenever you have any work, I’ll come running to you, got it, Presidente?

Solomon: Protecting this Chaldea and helping the Master are the priceless joys of my current life…

Main article: Tituba Sheba first appears in the form of Tituba in Salem, forcibly assigned the role by Raum. Crossing time and fantasy, she has revealed her appearance before Chaldea. For the sake of fulfilling a single promise, one that she will never forget―――[1]

Sheba's armament is a golden Djinn Lantern, which she uses with her magecraft and Noble Phantasm. She takes an incense burner made of gold to scatter incense smoke and manipulate it. With the fog from her Djinn Lantern, she can conjure smoke out of her incense burner and use it to attack directly, fire off whirlwinds, allow her to fly via the fog, create a copy of herself that attacks in tandem before disappearing in a puff of smoke, and form weapons such as clubs or boxing gloves or a massive hammer out of fog.

Sheba is a half-blood born between a human male minister of a certain country to the south and a female Nature Spirit Genie (Djinn). She inherited clairvoyance and future precognition from her djinn heritage, which was capable of rivaling Solomon's own Clairvoyance and reasoning that's why the SHEBA machine was named after her. She dislikes predicting the future of people she knows, and she also notes that her visions aren't set in stone; even having knowledge of a potential future can cause it to change, which is partially why she's reluctant to divulge certain tidbits to the heroes in Salem. Due to her being half-djinn, she is given a natural resistance to the Demon Pillars's powers and of course those jackal-like ears of hers. She also has horns and a fluffy tail, as well as other magical powers.

Sheba is blessed with sharp wit and sagacity that made her capable of challenging King Solomon with riddles as well as the precognitive ability to match Solomon in a duel of clairvoyance adapting to what was becoming settled as the future and the past through the three enigmas. First and foremost however, Sheba is highly intelligent in regards to prosperous business ventures, so much so that profits, money, and treasure are described as being the very blood and breath that circulate through her mind and body, an aspect that is aided by both her ability to see into the future and her keen memory that allows her to clearly see what people said ages ago and brings that up again the most critical moments. Her discerning eye is so keen that she is able to appraise the worth of any object with a glance as well as analyze the actions of her opponents in the same manner. She is also an incredibly skilled magus, being an incredibly powerful magus from the Age of Gods who can be compared to Circe, the self-proclaimed "Queen Witch" who taught Medea everything she knows. Her efforts slowed down the accelerated flow of time within the Salem Pseudo-Singularity, buying time for Chaldea to arrive and resolve it. She was even able to bring herself back from the dead after she was destroyed as a ghoul, but she would have faded away had the protagonist not forged a contract with her in time.

She passively weakens the power of Demon Gods, such as slowing down Raum's accelerated time back to normal levels in the Salem Pseudo-Singularity. Sheba passively creates a "Kingdom of Sheba", where her word is law. Alongside Circe, she managed to seal Abigail's gates.

Her interlude reveals that she unintentionally syncs with the SHEBA machine due her ability to see the future. The machine acts up when she has extreme emotions such as depression that she can't have any pet camels or annoyance at David.

Despite being in the physically weakest servant class and mostly fighting from a distance with her lamp, Sheba is skilled at physical strikes, being able to pummel the enemy by getting in close with kicks and boxing glove punches to pound the enemy before shooting them off.

Her Noble Phantasm is Three Enigmas.

Magic Resistance (Rank A): Negates magecraft of Rank A or lower. Modern mages can’t hurt the Queen with magecraft.

Territory Creation (Rank C): As a magician, she can construct a territory beneficial to her. She becomes the queen of a small kingdom concealed by an ephemeral, often unstable mirage.

Eye of the Spirits (Rank A): The formation of a barrier in the surroundings through firm, and fair transactions. Not just the appraisal of material things, even the suspicious conduct of enemies during battle cannot escape from her eyes.[1]

Wisdom of the Demon God (Rank A): The blessed sharp wit and sagacity that made her capable of challenging King Solomon with riddles.[1]

Charisma (Rank B-): The legendary queen of the "Kingdom of Sheba" that captivated people even of future times.[1]

Queen of Sheba in Fate/Grand Order is illustrated by Katou Itsuwa.

Retrieved from "https://typemoon.fandom.com/wiki/Caster_(Fate/Grand_Order_-_Queen_of_Sheba)?oldid=162841"
Community content is available under CC-BY-SA unless otherwise noted.