Queen of Ice and Snow
Bride of the Gods

Caster (キャスター, Kyasutā?) is a Caster-class Servant appearing in the Grand Orders of Fate/Grand Order.

Caster's True Name is Scáthach-Skaði (スカサハ＝スカディ, Sukasaha Sukadi?), a fusion of Skadi and Scáthach brought about by Odin in the Norse Lostbelt during Ragnarok, before he died while sealing Surtr.[2]

A Servant originating from the Scandinavian Lostbelt. A "completely different person" compared to the Scáthach from the common history of man, recognized as the only god in the Lostbelt, whose nature is closer to being a queen. In this work, Scáthach and Skadi are not perfectly equal in existences, but they mutually influence each other and the term "mixed up" is used. She, who, existed in the Lostbelt as "Scáthach-Skaði", has a particularly high mixing rate with Skaði, hence she has many attributes of the Bride of Gods.[1]

The Nordic Jötun who originated from the Celtic hero Scáthach, the mountain goddess───many of Skaði's characteristics are revealed. This side of Skadi should rather be expressed as "the Skadi with some of Scáthach's nature" than dark Scáthach.[1]

Skadi's name derives from Old Norse and means "one who scars". According to Prose Edda's "Sayings of Grímnir", she was the daughter of "the Abominable Jötun Þjazi", and lived in the old palace in Realm of Þrymheimr along with her father. After being married to the Nordic Gods, she was named "the Beautiful Bride of the Gods". Skadi is also called Öndurguð (Ski God) as well as Öndurdís (Ski Goddess). She was a master of hunting in the mountains and was also told to be a master of skiing.[1]

According to the Norwegian manuscript "Heimskringla", Skadi had divorced with the Vanir Njörðr and remarried with Odin. Although she is unmarried in this work, it should be noted to the degree that it would be deeply engraved in posterity.[1] 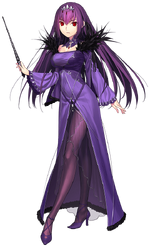 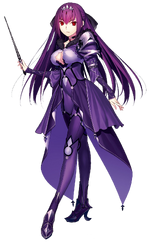 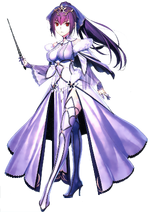 Caster Stage 1 in Fate/Grand Order, illustrated by [[[Hirokazu Koyama]].
Add a photo to this gallery

In this current world, she does not have the face of a mentor capable of raising a warrior. She is not a master of martial arts, either. Unlike the Lancer Scáthach who was more approachable, "Did I step on something", "Oh, what a young one (human)", and "Should I welcome you, or should I kill you" are just what makes up the properties of nature (gods). “Blow a breath. Be like a blizzard. And living beings will die.” “Smile. Be like the eternal spring. And life will sprout gorgeously.” Both, are equivalent to her.[1]

Her "Chaotic" alignment is self-proclaimed. When she ruled over the Scandinavian Lostbelt, her original purpose was for social order, but it is now different when she was reborn as a Heroic Spirit, or so it is said.[1]

Scáthach-Skadi became the King of the Lostbelt, establishing human villages and protecting them with the help of the Valkyrie. However, in order to keep the giants at bay, all humans were forced to reproduce at the age of fifteen and be sacrificed to the giants at the age of twenty-five. Though this arrangement was necessary to protect the humans, it still brought grief to Scáthach-Skadi. She ruled the Lostbelt for three thousand years until modern day 2018.

Ophelia Phamrsolone states the power of Scáthach-Skaði is easily a match for a Divine Spirit and that she can't imagine her having anything to fear, even from Caenis.[3] Upon being notified by Kirschtaria that Caenis would visit her Lostbelt, Ophelia expressed concern that Scáthach-Skaði would destroy Caenis Saint Graph if they were to clash.[4]

She uses Runes and is shown using a wand, as well as employing numerous ice attacks.[6]

Territory Creation (EX Rank): As a queen, she's able to reproduce her castle anywhere she goes. To modern magecraft, this extraordinary ability would be equal to Temple-level, but Skadi herself claims that she's 'not very good' at creating territory. If so, one must wonder how incredible the God of Magic Odin's abilities would be.[1]

Item Construction (A Rank): As a queen, she's able to create many things with her mana. She can create anything from miraculous medicines to equipment to tree seeds, but they all seem to be created with a low temperature. Her items will be cold to the touch.[1] Other than her shadow,ice and snow based abilities, Scathach-Skadi has also displayed the ability to duplicate and mass produce the Three surviving Valkyrie's in order to create an army and create unique masks to manipulate and control the surviving Jotun Giants.

Divine Core of the Goddess (A Rank): A skill that symbolizes her status as a goddess. A composite skill that includes Divinity. Due to Scathach-Skadi possessing both god and giant attributes, she has been classified as A-rank instead of EX.[1]

Primordial Rune (—): The ability to freely control norse runes. Unlike the runes commonly used by modern magi, these are the original runes created by the great god Odin. Their power transcends human understanding.[1]

Freezing Blizzard (B Rank): A skill that represents her attribute as the goddess of the icy mountains, Skadi. The manifestation of the cold winds of the north that freeze all of creation. Normally this ability is part of her goddess authority, so if she uses it at A rank or above, Queen Scathach's spiritual core will completely shatter. Due to this, the use of this skill is limited to B rank.[1]

Wisdom of the Great God (B+ Rank): Due to being known as 'the beautiful bride of the gods', Skadi's body possesses the blessings and protection of the Norse gods. A skill based on the wisdom obtained by the Great Odin when he gave up one of his eyes. It's similar but differs from Scathach's 'Wisdom of Dún Scáith' skill.[1]

Hirokazu Koyama is the character illustrator for Scáthach-Skadi.

Retrieved from "https://typemoon.fandom.com/wiki/Caster_(Fate/Grand_Order_-_Sc%C3%A1thach)?oldid=163434"
Community content is available under CC-BY-SA unless otherwise noted.