Caster of the Nightless City

One Thousand and One Nights (Arabian Nights)[1]

Caster's True Name is Scheherazade (シェヘラザード, Sheherazādo?). "One Thousand and One Nights", a collection of stories structured with embedded narratives. In the outermost frame of that story, Scheherazade fulfills the role as the narrator. Whether the "Scheherazade" that is here is a character from the stories, or the actual person who served as the character's model―――no one can be sure. There is no one other than herself who knows all the truths of "her own tale".[1]

King Shahryar had repeated a cycle of killing maidens he married every night. In order to stop that evil act, the vizier's daughter, Scheherazade, offered herself up for marriage. As Scheherazade spent her first night with the king, a plan was set where her invited sister, Dunyazade, would beg her to tell a story. The king would listen to Scheherazade's narrated stories which Dunyazade spoke of with fascination, and plead for her to continue but, by then, dawn had already arrived. Scheherazade announced "Please hold onto that excitement for tomorrow's story". For that purpose, the king continued to let Scheherazade live so that he could listen to her stories, and eventually―――[1]

In the present ending of the "One Thousand and One Nights", "Scheherazade bore three children, and the king learned of patience" was the manner in which the story ended. As aforementioned, this was a conclusion that didn't exist in the original tale, and there is a high chance that the "Scheherazade" here has not experienced this.[1]

But now, it is plausible that this is being narrated as―――The same as what was attained from that rainbow, that crushed the Phantasmal Metropolis/Illusory Citadel. Someone surely made a wish. Someone other than her―――a form given to the salvation of Scheherazade herself.[1]

The approximately thousand stories have been read until now, and its vast majority was added by preceding translators. One theory surmises that the original number of tales which formed the core were no more than two-hundred and ten stories, with no conclusion to them.[1] 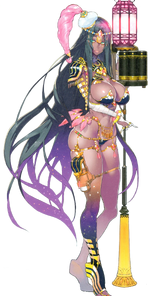 Scheherazade states that rather than the battlefield, she is more suited for the Master's room.[1] Her experiences have given her a fear of death and she hates the Servant system which would cause her to repeatedly experience it.[1][2][3] In life, Scheherazade was a brave woman who voluntarily took part in her father's plan to stop the madness of King Shahryar. However, as time passed where she tried to prolong her life, Scheherazade grew more fearful of death as she could easily be killed by the mad king on a whim. In the end, despite how King Shahryar eventually became sane and Scheherazade ended up surviving the ordeal, Scheherazade was deeply traumatized by the tribulation that caused her to fear death even as a Servant.

Scheherazade was one of the masterminds behind the Agartha Singularity, cooperating with Phenex in order to create an incident which would reduce the world's Mystery and render the Servant system non-functional, so she wouldn't have to repeatedly experience death.[2][3]

Scheherazade has fairly low parameters aside from her Luck, Skills and Noble Phantasm, and she herself states that she is more suited for her Master's room rather than the battlefield.[1] Her Personal Skills are Narrator, Bedchambers of Survival and Counter Hero (specialized against kings). Her Noble Phantasm is Alf Layla wa-Layla.[1]

While being supported by Phenex, Scheherazade was capable of using her Noble Phantasm to create the Agartha singularity, an encroachment of fiction onto reality, and modify the Saint Graphs of certain Servants within it.[2]

Namaniku ATK is the character designer for Scheherazade.

Retrieved from "https://typemoon.fandom.com/wiki/Caster_(Fate/Grand_Order_-_Scheherazade)?oldid=137400"
Community content is available under CC-BY-SA unless otherwise noted.