Caster (キャスター, Kyasutā?) is the Caster-class Servant of the Fuhrer in the Imperial Capital Holy Grail Strange Story of Fate/KOHA-ACE. He is the Servant of High Priest Makuzu in Fate/Grand Order.

Caster's True Name is Maxwell's Demon (マックスウェルの悪魔, Makkusuweru no Akuma?), a fictional demon created by James Clerk Maxwell as a thought experiment, distorted by the desires of people.

Caster has short, well groomed orange hair, and is dressed in a Tan Business Suit with a Red Tie and Sunglasses. 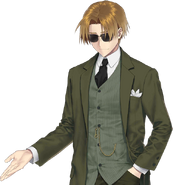 Caster in Fate/Grand Order, illustrated by Ikezawa Shin.
Add a photo to this gallery

Rather than being a magus, he is a scientist Heroic Spirit. Due to the nature of Maxwell's Demon not being resolved as of the 1940s, Caster is impossible to kill, except by attacks that kill even unkillable existences. He possesses no Class Skills or Stats in anything other than Noble Phantasm, and his only Skill is Devil's Proof, however no description of the skill is given. His Noble Phantasm is also called Maxwell's Demon.

Retrieved from "https://typemoon.fandom.com/wiki/Caster_(Fate/KOHA-ACE)?oldid=157146"
Community content is available under CC-BY-SA unless otherwise noted.