Anything luxurious and shiny, Azuki Shiruko

The niece of Oda Nobunaga, Conqueror of the Warring States, and concubine of Toyotomi Hideyoshi, the Child of the Sun.[1]

The eldest of the three Azai sisters, Chacha. A daughter of Azai NagamasaWP, a Warring States daimyo from the Ōmi ProvinceWP, that had as her mother the younger sister of Oda Nobunaga, OichiWP. She experienced a castle fall three times in her lifetime, and at each time she lost her father, her mother, and finally everything that she had. A tragic woman who was branded as the wicked servant who ruined ToyotomiWP by the later masses.[1]

For some reason, she has manifested in a childish form that is not her golden age.[1] 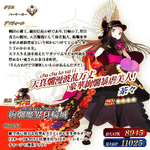 Castle of the Sun (日輪の城?) in Fate/Grand Order, illustrated by Fuzichoco.

Happy-go-lucky and insolent and a super wastrel with luxurious tastes, at any rate she is a troublesome and expensive woman. Even though her stubborness can make the Tenkabito (Toyotomi Hideyoshi) clutch his head, for some reason she is a beloved playful-type princess that cannot be hated.[1]

Although you cannot tell at all from her appearance and behavior, even now her body continues to be burned by the flames of resentment from those related to Toyotomi. Although Toyotomi’s ruin was not necessarily her fault alone, one cannot begin to infer about her heart, who in the end lost even her beloved child amidst the flames. Maybe the reason why she has manifested while avoiding her golden age’s form is because the short time when she was allowed to remain in this form was something irreplaceable in her life.[1]

It was Chacha's powerful sense of shame she felt on the verge of death that led Andras through the sea of death. She was eventually summoned to the Singularity Andras arrived at[3] as the Demon God calls out to those who share his desire of not wanting to die.[3][4] She only remembers being consumed by the flames of the burning Osaka Castle and assumes she is in Hell. Andras reads from her record that she destroyed the Toyotomi. He also understands that, like himself, she is on the verge of death. Understanding that feeling, he attempts to fuse with her. But Chacha resists and denies she destroyed the Toyotomi, claiming she tried to save Hideyori. Andras realizes that history has slandered her and determines she is the perfect vessel for him. Chacha denies she is a destroyer and escapes from the Singularity.[3]

She arrives in Chaldea, specifically Ritsuka's room. Dispatching a Nobbu in the room, she claims to come from another dimension to tell Ritsuka of impending doom. She is surprised to see her aunt, Oda Nobunaga, there, having thought she was killed by Akechi Mitsuhide in Honnoji. Leonardo da Vinci then tells the group that Chaldea is infested with GudaGuda Particles. Hearing these turn infected Servants into disappointments, the group rayshift to the source.[5]

Upon arriving on a beach, Nobunaga sends Blackbeard flying into the distance. She z asks Chacha what period they're in, but the latter only knows it isn't theirs. A Nobbu Tank then appears to capture Chacha, but the group defeat it. They're thanked by a local fisherman, who reveals there's been constant fighting ever since the Oda Shogunate conquered the Tokugawa last week.[6]

The group eats at a local Kyoto restaurant when they hear a commotion. It is the Oda and Shinsengumi fighting again. The group sees a man claiming to be Nobunaga fighting Hijikata Toshizou. However, upon closer inspection, Nobunaga sees her impostor is none other than her brother, Oda Nobukatsu. Nobukatsu confesses he made a new Oda Shogunate to save the people from their decadence. Nobunaga prepares to punish him for taking her name when Hijikata stops her, as Nobukatsu is his prey. Okita stops them before a fight can ensue. Nobunaga and Okita go their separate ways; Nobunaga with her brother and Okita with Hijikata. Regardless of who they choose to go with, Chacha follows Ritsuka.[7]

Both parties eventually learn from Hijikata's Nobunsengumi messenger lthat Ronin plotting to burn Kyoto are going to meet in secret at the Ikedaya Inn.[8][9] That night, Nobunaga and Chacha find Nobukatsu as he escapes from the inn and learns he's conspiring to usurp Nobunaga's position as head of the Oda. They prepare to punish him when one of his beneficiaries, Katsura Tesla, attacks with Nobbu UFOs. Nobukatsu escapes while they’re busy fighting. Chacha and Nobunaga eventually destroy the UFOs, so Tesla surrenders to them. They join up with Ritsuka, Okita, and Hijikata, who just captured Nobukatsu's other beneficiary, Saigou Edimori. However, the two inventors flashbang the group, and escape while Nobunaga and Hijitaka argue. The group learns from the inventors' boasting as they escaped that their base is in Toba-Fushimi. Okita collapses from overexertion afterward.[10]

Back at Shinsengumi headquarters, Chacha argues with Hijikata about taking Okita into battle to Toba-Fushimi when she isn’t well enough. However, Okita joins him anyway, causing Chacha to leave, but not before giving medicine to Okita.[11]

Chacha eventually goes to Toba-Fushimi out of concern for Okita and sees the battle is going well for the group. She then notices Nobukatsu running off somewhere and so decides to follow him. However, Nobukatsu is alerted to her presence when she’s shocked by his mentioning of Taikou. He tells her he was summoned to be Takiou’s servant, and he’ll send her to the castle. Chacha refuses to believe Taikou is alive, but Nobukatsu replies death hasn’t affected either of them due to the Singularity’s nature. He then renders Chacha unconscious and captures her.[12]

Nobukatsu takes her to the Sun Fortress and sacrifices to revive Andras as Golden Demon Taikou Hideyoshi.[13][14] Fortunately, when the others come to rescue her, she has to be fully consumed. She confesses to Nobunaga that she has been hearing the voices of the Totoyomi blaming her for its destruction. But Nobunaga reminds her niece how the real Hideyoshi truly cared for her despite his general character, thus helping Chacha realize Andras' deception. The group then proceed to fight Andras to rescue Chacha.[3]

After he is defeated, Andras realizes Chacha will not accept eternity. He then disappears, recognizing life is nothing without purpose. Nobukatsu disappears afterward as his Spirit Origin was maintained by Andras. However, even with Andras gone, the Singularity isn't collapsing. Nobunaga deduces that a shard of Andras is with Hijikata, being the Demon God's original vessel.[3] She then proceeds to reveal the truth about Hijikata and his connection with Andras. Hijikata realizes the group is trapped in the Singularity until he dies. He then fights the group to determine whether his or Okita’s Shinsengumi is the real one. With his demise, the Singularity begins to collapse, so the group rayshift back to Chaldea.[4]

There Chacha gives Ritsuka the Grail she took from Andras, and joins Chaldea.[4]

Chacha and Okita are shocked when Nobunaga abruptly tells them that she is going to become a rockstar.  Chacha compares her aunt's ambition to be a rockstar to her attempt to unify Japan through military force. Nobunaga then shows her and Okita a flyer for Ishtar's race, pointing out that the race will have a live broadcast. She plans to win the race and then perform a commemorative concert when all eyes are on her. She then changes into her custom-made swimsuit. Chacha thinks Nobunaga got her swimsuit as well. But Nobunaga admits to her niece that she used her gold, along with the Shinsengumi's funds, to make the swimsuit. Chacha, following after Okita, attacks Nobunaga for ruining her plan to vacation at Atami with Totoyomi's money.

Suspicious that everyone is in a good mood when she returns from her having ice cream, Chacha believes they’re up to something and decides she must stop them. Calling herself Lady Yodo, she calls upon the “proud warriors of the Toyotomi”, who she found randomly in the cafeteria, to assemble before her. She will show everyone the true imperial capital.[15] Later, Chacha goes to use Chaldeas, where upon she is caught by Nobunaga. She attacks her aunt and steals a piece of her Spirit Origin. She then opens a mysterious portal presumably created from data regarding Chaldea's previous operation to the Singularity.[16]

In her throne room at the Singularity, Chacha thanks EMIYA, Medea, Li Shuwen, Nobukatsu, Mysterious Heroine X, Mysterious Heroine X Alter, and Medusa for coming, thinking they came because of her flyers. After dismissing what they say, she expresses how angry she is that she wasn’t included in on the fun. Her desire for revenge is such that her class has changed from Berserker to Avenger. Then, addressing the others as her Seven Imperial Spears, Chacha orders them to go and drive this world into the depths of despair, adding that she will provide special soldiers crafted from Nobunaga’s Spirit Origin.[17]

When Ritsuka’s party arrives at her throne room, Chacha calls them evil servants of the Tokugawa and is impressed they defeated her Seven Imperial Spears. Though she expresses a strong desire for revenge, she sees the group isn’t taking her seriously. So she decides to show them how powerful she has become and pulls out the Grail that she found when she arrived. She explains that she felt an incredible surge of power after she finished eating ice cream out of the Grail. With her declaration that nobody can stop her and the imperial capital will be reduced to dust, Ritsuka’s party proceeds to battle Chacha.[18]

Chacha is defeated and falls asleep. She soon wakes up and, despite having no memory of what she did, she apologizes for the trouble she’s caused. Okita Alter tells her not to worry about it, adding all of this is very exciting to her since she was only born recently. She and Chacha then quickly become friends. Chacha becomes enraged at Nobunaga, however, upon learning that she ate her pudding cup.[18]

Chacha is exceedingly clumsy and naive due to being summoned at such a young age, constantly tripping over herself during combat. Nevertheless, she is still skilled in combat, making use of her katana to dice her enemies apart with enough skill to even fight against Hijikata, a master swordsman regarded for his pragmatic fighting style and combat ferocity, and Okita Souji, whose swordsmanship is so refined that it exists beyond human possibility.

Chacha's Noble Phantasm is Dazzling Castle of the Sun in the Demonic Realm.

pako is the character designer for Chacha.[1]

"Mothers are a place to return to. They’re family. A Servant that wants you to laugh as much as possible. She wants to mess it up all the way. She wants to contribute by spoiling you. I feel very happy seeing how funnily her battle sprite moves. Surprisingly burning!!"