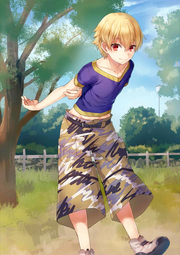 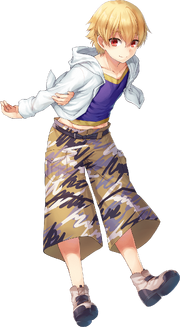 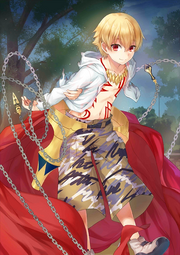 As a child, he was considered to be a king with aptitude for ruling superior to all others, the "epitome of the ideal boy king." Although Enkidu was created to reprimand Gilgamesh while he was still a child, Enkidu was not allowed to combat Gilgamesh until they could fight as equals. As Enkidu watched the young king, he could not understand what flaw he could possess that would require correction, but he witnessed the change firsthand as Gilgamesh grew. Changing into a despot who caused the masses to lament, Enkidu was presented with a reason to confront him.[2]

Child-Gil possesses the same blood-red eyes and golden hair that makes his older-self stand out from others. Shirou is unable to identify him from sight at first in comparison to his older self, and he finds it hard to believe they are the same person even after being told, though this is more due to their great differences in personality.

In contrast to his older self, Child-Gil was praised and lauded by the citizens of Uruk to the point of infatuation as tolerant, sage, fair, and moral. The only "flaw" that could be described at the point is that he respected the gods without submitting to them.[2]

Adult Gilgamesh declares Child-Gil and his adult self to be fundamentally different, much to the point where he speaks of his childhood self in a secondhand manner. His adult self cannot perceive the memories of his younger self despite an otherwise flawless memory, and he believes Child-Gil to be the same in nature. Gilgamesh says Child-Gil very well may have stopped his growth, or even committed suicide, had he known how his adulthood-self would act.[3] In Fate/Grand Order, when asked the thing he hated, he becomes reproachful to his Master but answers that it is his adult self and sadly wonders why he becomes like that.

Fundamentally, a polite and modest boy. His type of woman goes along the lines of a "flower that blooms in the wild". Although he attained a piece of the truth regarding the demise of human history, he won't say a thing to his master. He only watches over the Master's fight and smiles.[1]

Child-Gil does not appear in Fate/stay night, but it is mentioned that during the intervening years between the Fourth Holy Grail War and the Fifth Holy Grail War that Gilgamesh took the potion of youth to allow him to live in modern society without causing a problem.[4]

Gilgamesh utilizes his child form for much of Fate/hollow ataraxia to act low-profile in Fuyuki City and avoid interacting with previous Servants or Masters.

Child-Gil is rather popular with other children. Even Shirou is rather fond of him.

It is not clear if his adult self became younger by eating the miracle drug of rejuvenation, or if he had manifested in the form of his younger days from the beginning. It is believed that what is acting as the model for his mentality is the heart from when he was called a wise ruler in the past.[1]

Gilgamesh and Amakusa Shirou Tokisada are fighting over who gets the Pseudo-Grail. However, neither can surpass the other since Gilgamesh is the strongest Heroic Spirit and Amakusa Shirou is a Ruler. They both note that it'd be easier if Astolfo was an ally, but Astolfo dislikes them both. The two then decide to continue their fight when Astolfo arrives and announces he brought a Master.

Entering the Psuedo-Grail's chamber, everyone splits into teams of two to combat the Shadow Servants. Astolfo goes with Gilgamesh, while Amakusa Shirou goes with Ritsuka and Mash. After destroying the Shadow Servants, the group prepares to destroy the Psuedo-Grail. But a massive ghost with magical energy equal to a Demon God emerges from it. After the others destroy the ghost, Gilgamesh destroys the Psuedo-Grail. Afterward, Gilgamesh asks Ritsuka to judge whose the better Servant next time. He disappears in the hopes he'll meet Ritsuka again.

Jeanne Alter wakes him up at night and asks for an invisibility potion. Unfortunately for her, Gilgamesh accidentally gives her the Potion of Youth instead. So when she drinks, Jeanne Alter turns into a child: Jeanne Alter Lily. Gilgamesh apologizes, making the excuse that he shouldn't have opened his treasury while lying on the floor. Alter Lily criticizes him for his carelessness.

Child-Gil is weaker in ability than his older self, lacking sufficient magical energy to summon a large amount of Noble Phantasms from the Gate of Babylon. Despite that, he lacks the "Conceitful" skill possessed by his older self and displays better usage with his limited weaponry, so it could be said he is stronger as a child in that sense. Child-Gil also has the ability to petrify and stun an opponent with a move called The Kings Smile. In his peaceful state the smile looks adorable and can stun a person for a short amount of time. In his evil state, the smile can petrify a person for hours unless they have the courage to fight. The evil side being stronger, takes more of a toll on a persons body.[5]