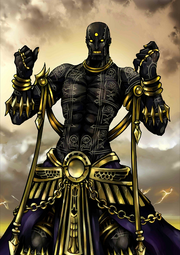 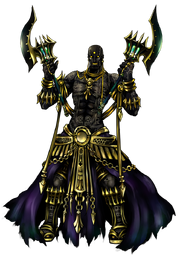 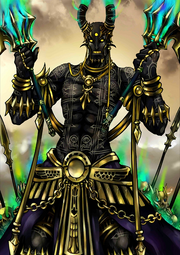 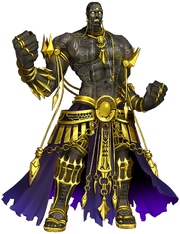 He appears in the Moon Holy Grail War of Fate/EXTRA Last Encore, having been sold by his Master to Shinji Matou and made into a corrupted Servant.

A valorous king of Ancient Persia. A character from the 4th Century BC. Known as the last emperor of the Achaemenid Dynasty.[1][2] A "worthy rival" of Iskandar, the King of Conquerors of Macedonia, whom he faced in combat many times.[2]

Darius III was born in a branch of the royal family descended from the great ancestor Darius I, known as a king with excellent discernment and superior governing ability. Darius I was a wise king among wise kings who built the military roads that connected the cities and established the post-station system, fomenting the commercial and cultural exchanges, and who filled the state coffers by making the tax collection from the provinces more efficient with his satrap system and his new tax system. And with respecting the provincial rules, he showed great tolerance by giving freedom to the conquered peoples to practice their beliefs and customs; and at the same time, he prevented military insurrections by monitoring the satraps and the provinces with his inspectors, the "Eyes of the King" and the "Ears of the King". Indeed, the First was a benevolent king who didn't bind the people, but instead loved the cultures and exchanges, and made the country wealthy.[1] Darius I has opened the "Door of Babylon" without hesitation, thus his descendants gained some measure of wealth. And thus, they were embroiled in a great many wars.[3]

As an adult, Darius III obtained the position of satrap (a governor-general) and took his post as the governor of a province. And then, suddenly, he became the new king. He was supported as the new king by the eunuch Bagoas, who had killed in succession Artaxerxes III and his son and the king Arses. The man also wanted to be like Darius I. There was a single reason that made him, born in a mere branch of the royal family, decide to take upon the name of that great king and become Darius III. Even if he had obtained the throne at the end of a bloody and tragic conspiracy, he aspired to become a great king, loved by his people and the land. However, he couldn't become a benevolent king due to his own choice. Now as king Darius III, he immediately purged the treacherous Bagoas. And just as he was about to bring order to the state system, his destiny arrived.[1]

That was the invasion of the awe-inspiring great king, the King of Conquerors of Macedonia, Iskandar. Compared with this great king, that treacherous retainer that once had violated the country like he owned the place amounted to nothing. Darius III compares the traitor Bagoas and Iskandar differently. The difference between a scoundrel that plunders the country and abuses the people and somebody that doesn't is evident. Iskandar, Alexander the Great; at the very least, he was not a villain. There was no doubt that he was suitable to be a great king around whom the conquered kings and generals and people gather and become retainers under. He chose himself as a war king, a wall against that great king, a "worthy rival" of Iskandar. Darius III never bowed his head in front of his "worthy opponent" Iskandar, even as he ruled the conquered people in a way reminiscing that of Darius I. He neither considered to become a wing of the glorious Machedonian army like the other kings.[1]

He chose to fight. Darius III stood up against the fierce attack of the Macedonian army and of the king Iskandar, his real destined opponent. He became determined to become not a benevolent king, but a War King. Leading a massive army several times larger than the looming Macedonian army, he clashed once and again with a fierceness surpassing that of mere interceptions, and even after being defeated, he always came back to obstruct King Iskandar's way without losing his bravery even after being defeated once and again and again.[1]

Darius III's land was eventually conquered by Iskandar. Upon sitting on his throne, Iskandar could not have his feet reach even Darius III's footstool and had to swap it out with a table.[4]

Although it is told in the history books that Alexander was a short man, the reality was that Darius simply towered over the 212 cm man at over three meters in height.[4]

Darius III's normal facial expression is calm. Still, he is constantly filled with a firm fighting spirit. During battle, he opens his eyes and begins the destruction of the target by becoming a storm itself.[1][2]

An unwavering man. Darius III's expression at peacetime is calm.[1] An indomitable man with an unshakable fighting spirit.[1][2] Although he still gives off the style of a monarch, his extremely high Mad Enhancement has scattered most of that human nature.[1][2]

In contrary to the sternness of his fights, strangely, Darius III's reactions towards his Master are mostly obedient. Maybe it depends on the summoning system or in the Master's qualities as he does not run wildly in normal times, and comparatively listens properly to what he is told. His effective Disengage Skill is also not wasted when retreating from battle.[1][2] However, since he is usually silent, there is not much point in conversing with him.[1]

Darius III's wish for the Holy Grail is to have "a rematch with Iskandar". Not a one-on-one, rather, he desires a rematch that is a clash of troops against troops. Although a comparatively obedient Servant, he is likely to run wild when his wish is involved, so special attention is required.[1][2] However, if the Master has developed a strong enough bond with the Berserker, Darius III is willing to prioritize the life of his Master over his desire. Under normal circumstances, he is silent, but he can yell out the name "Iskandar".

Iskandar
His destined great opponent and his eternally worthy rival. Darius III will try to fight the moment they meet. Just like Berserker Lancelot when he sees Saber (Artoria).[1]

Nitocris
It's a different person with the same name, but there's a connection between the Assyrian queen Nitocris and Darius III's ancestor.[1]

Gilgamesh
There's a distant connection by way of the Assyrian queen Nitocris.[1]

Darius III appears in the Singularity as the result of a chain summoning with Alexander. He attacks the party with his undead army while they’re marching towards the United Roman Empire’s capital. The party eventually defeated him and his army.

Darius III appears in the singularity under the name Takeda Darius, and because of his madness, his roars are translated by his subordinate, Sanada Medusa. Encountering Ritsuka, Mash, Okita, and Nobunaga, Takeda tells them he’ll settle his match with Nobunaga, and that they shall bare their corpses before his cavalry. However, Nobunaga points out that he’s riding an elephant, to which he tells her to not worry about the details. After being defeated by the group, Takeda disappears, saying that he’ll plant his army’s flag in Persia.

Darius III writes and sends a letter to Santa Claus, though the letter he wrote was largely unreadable. But, when Julius Caesar visits his palace, he happily mistook him for Santa Claus. However, his possessions are then taken by Caesar, who later claims he was borrowing them to use as presents. Darius then waits in his palace until Santa Alter, who mistakes him as a candle tree, arrives. He then becomes excited when The Phantom of the Opera says Santa Claus after Santa Alter revealed herself. Darius then becomes even more excited at the prospect of getting presents, which in results in him fighting Santa Alter with The Phantom and Lu Bu to take the presents. After being defeated by Santa Alter, Darius is given a present from her, which he graciously accepts.

Darius is one of the "Septem" Singularity Servants summoned to aid Chaldea.

Lord of the Destructive Storm[]

Darius fights off various skeleton soldiers while Mash reads aloud a narration about him that Romani gave her. After finally defeating all of the enemies, Mash asks Darius if he wanted to come to Septem because he sensed something as the reason for the skeletons' appearance. But Romani reveals that the skeletons were summoned because of Darius's Noble Phantasm.

Darius III is one of the three Berserkers under Shinji's control, along with Leonidas and Fergus. They were sent to eliminate Saber, but she tricked them into destroying the firewall that was holding them, allowing her and her master to escape. Shinji summoned them once again to stop Saber and her master from using the elevator to go where he was, but they managed to use it while Rin stayed to face the Berserkers. In the end, Rin managed to single-handedly defeat all three of them.

Darius has been Oraclized to be a member of Karl der Große's New Holy Empire.

If Hakuno's Servants choose to rescue Cú Chulainn in Mare Origio, Darius confronts them with an army of Attack Programs, Shadow Servants supported by fascimile No Name. After his army is defeated, he personally fights Hakuno's Servants. He is subsequently defeated and finished off by Charlemagne.

Darius reappears later with Lancelot and Medusa if Hakuno's forces intercept Karl's forces at Mare Origio. He summons his undead troops to attack Hakuno's army while they weakened by Medusa's Blood Fort Andromeda. After the Blood Fort is dispelled, Darius is soon defeated, which causes his soldiers to disappear.

Darius III was mentioned by Rider in the Fate/Zero novel and the manga, when Waver Velvet questions about Alexander the Great's height. Iskandar holds him in high regard, his expression at hearing Darius' name showing reminiscence akin to remembering an old friend. He describes both Darius' caliber as an emperor and his figure as a person as majestic, and tells that Darius was a fitting ruler for the mighty Persian Empire.[4]

In Fate/GUDAGUDA Order, Darius III is noted to be from Persia and a rival to the King of Conquerors. He looks like an Indian and he was breathing out fire, to which the manga parodies him like Dhalsim. Saber tells the audience to read Fate/Zero, whereas Rider points out that he doesn't appear in Fate/Zero. Waver Velvet and Rider both appear to recognize him. Dar-ius (誰イオス, Dare iosu?) is his given nickname in Fate/GUDAGUDA Order. It uses a combination of the Japanese word Who (誰, Dare?) and ios (イオス, iosu?) to make it sound like Darius.

Darius III is seen wielding two axes for combat, able to unleash emerald flames from the gems in the axe-heads. Besides combat performance, monetary assets are also a part of his strength due to his Golden Rule Skill.[2] Since he had enough assets to challenge Iskandar several times during his life, Darius III posseses this Skill at Rank B. His financial power is a part of his strength as much as his combat ability.[1]

Due to Darius III's Mad Enhancement, all Parameters are ranked up but most of his sanity is lost.[1] However, because of his more obedient nature to his Master in comparison to other Berserkers, Darius III effective Disengage Skill is not wasted when retreating from battle even despite being summoned into the Berserker Class.[1][2]

Darius III's Noble Phantasm is Athanaton Ten Thousand, his army of ten thousand elite men with their natures as indestructible and immortal emphasized.

PFALZ is the character illustrator for Darius III.[1][2] Hikaru Sakurai is the scenario writer for his character.[1]