TYPE-MOON Wiki
Register
Don't have an account?
Sign In
Advertisement
in: Dragons, Familiars, Magical tools and artifacts,
and 5 more
English

They are used by Medea, Semiramis and Circe through the Item Construction skill. Familiars made from dragon fangs are known as Hecate's specialty, whom Medea's magecraft derives from. Acting more like golems than automatons, they are skeleton rank-and-file disposable soldiers meant to be readily expendable in battle. They are brought forth by planting the dragon teeth in the ground, an inexpensive act allowing for a near-limitless amount to be created. Bestowed with the magical energy of the dragon race and granted knowledge from the earth, they are able to act as an army to slow their enemies.[2]

Illyasviel von Einzbern comments that they are "cheap", and Saber mentions their low quality, but that is easily overlooked due to their amount. Powerless against homunculi and golems built specifically for battle, together they are legion, able to overwhelm others through sheer number.

They are very strong, said to be able to be very troublesome for a "group of level five adventurers." Shirou Emiya is able to easily destroy them in one-on-one combat with a reinforced wooden sword, and Servants can easily wipe them out without trouble. Even a group of five hundred poses no immediate threat to a Servant, but it can be called foolhardy to rush into a group of them without a plan. Some Servants can easily destroy hundreds at once with their Noble Phantasms, but it does not put any noticeable strain on the large numbers of the forces. While Saber alone can easily destroy one hundred without issue, enough so that the scattered pieces of bones make it look like there is a snowstorm, their constant replenishing numbers are able to keep her busy and have her contemplate using Excalibur to quickly finish them off. Medea can keep replenishing them as necessary to easily surround a stronghold, while Semiramis can easily produce an army of three thousand in short order, only with the ability of the Hanging Gardens of Babylon enhancing her, for a large battle.

Medea can create at least three types, and Semiramis shows the ability to modify them in functionality. While mindless, they show the ability to be "awed" and left motionless by nearby Servants clashing. Dragon Tooth Warriors use a variety of different weapons such as giant cleavers, broadswords, twin daggers, spears, and bows and arrows, wielded with smooth, mechanical movements that provide wasteless, accurate attacks. The attacks, while accurate, are not refined and do not instill a sense of fear like a true seasoned opponent, moving in loose movements and attacking in the same way. They charge no matter how much they are destroyed, continually destroying the area around them with each attack as they try to slay their targets. Medea has also shown the ability to form Warriors out of other elements, such as making them out of water: being made of water grants them the ability to regenerate and multiply if they take damage or are destroyed from the scattered water remains.[3]. Medea was also capable of using the bones of numerous Dragon Tooth Warriors in order to create a massive Dragon Tooth Warrior giant that was as tall as a skyscraper.[4] Semiramis' special modified flying soldiers, Dragon Wing Warriors (竜翼兵, Ryūyoku-hei?), have the upper-halves of regular soldiers and lower halves of harpies with bird-like features, claws sharper than metal, and wings sprouting from their backs. As harpies are normally unsuitable as soldiers, she has fused them with the Dragon Tooth Warriors, producing "very thin and ugly-looking soldiers" unbefitting of their "dragon" name. 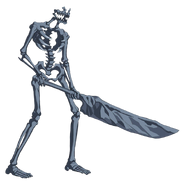 Dragon Tooth Warrior of the Saber-class 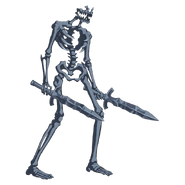 Dragon Tooth Warrior of the Assassin-class 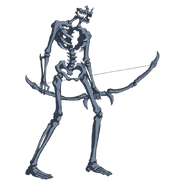 Dragon Tooth Warrior of the Archer-class 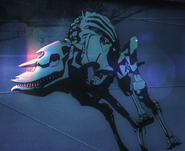