In Norse mythology and derived tales, Fafnir was originally a dwarf, but overcome with greed for a certain treasure, he transformed into a dragon. He was eventually slain by Sigurd or Siegfried, depending on the tale.

Fafnir is caused by the Evil Dragon Phenomenon (悪竜現象, Akuryū Genshō?), which transforms those who exhibit overwhelming greed into him. Because of this Fafnir is not an individual, but a series of Evil Dragons.

Siegfried slew him and bathed in his blood to obtain a body close to that of a dragon, Armor of Fafnir.[1][3][6] He also took Fafnir's treasure hoard, Das Rheingold.

Sigurd slew Fafnir and ate his heart to gain knowledge, the Crystallization of Wisdom represented by his glasses, as well as a magical energy reactor core in the form of Dragon-kind Modification.[7]

It is unknown who exactly defeated the evil dragon that is common to their legends, and it is even possible that both defeated "different" dragons created by the Evil Dragon Phenomenon.[7] 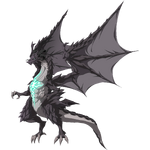 Sieg as Fafnir in Fate/Grand Order.

Sieg, obtaining Siegfried's heart, is overwhelmed by the dragon blood during the Great Holy Grail War and fights Fafnir in his dreams. It begins to kill him later, but he uses the Holy Grail to accelerate the process and take on Fafnir's form. He, in Fafnir's form, then takes the Grail to the Reverse Side of the World, where there are no humans for it to affect.[8]

Fafnir appears as an enemy under the control of Jeanne Alter in France in Fate/Grand Order, as her strongest dragon.[9] He is finally defeated by Siegfried in the final battle against Jeanne Alter's forces.[10]

Due to not being completely destroyed, Fafnir later revived, but the dragon was once again slain by Siegfried who sensed its revival.[11]

Surtr begins taking on aspects of Fafnir due to his extreme greed born from a desire to burn the entire world, not just Scandinavia as he was meant to do.[12] Ophelia Phamrsolone claims to see invisible dragon wings emerging from his back.[13] This Fafnir aspect makes him conceptually weak to Sigurd, as Sigurd himself boasts.[12]

Sieg, still in the form of Fafnir, is having difficulties keeping control of the Greater Grail, summoning a spiritual body replica of Ritsuka Fujimaru's consciousness from the Shadow Border to aid in the task. As Fafnir, he created a terminal of Sieg to properly interact with Ritsuka.[2][14]

During the climax of the events surrounding Oniland, Moshirechikuchiku Kotanechikuchiku assumed the form of a golden Fafnir-type dragon, due to the mixing of the Kamuy's gold with the legend of Das Rheingold as a result of Sitonai's manifestation (with Sitonai herself as a component of the High-Servant and Illyasviel von Einzbern as the vessel for the Pseudo-Servant).[15]

Fafnir is regarded as the ultimate Dragon, surpassing even Tarasque. He is able to equally match Siegfried's Balmung with with his own fire breath. Jeanne d'Arc is able to block it with Luminosité Eternelle albeit with high difficulty. Although Siegfried believes that Mash Kyrielight should be able to block it too with Lord Chaldeas, after Fafnir absorbs the mana in the atmosphere of the Orleans Singularity to power his attack, its power becomes too much for her to handle. In fact, it could have destroyed all of Orleans had Jeanne not redirected his head with a strike.[16] Fafnir is killed by Balmung boosted by a Command Spell, which transforms it into an Anti-Fortress Noble Phantasm.[17]