Fate/Prototype: Fragments of Sky Silver (フェイト/プロトタイプ 蒼銀のフラグメンツ, Feito/Purototaipu Sōgin no Furagumentsu?) is a story detailing the First Tokyo Holy Grail War written by Hikaru Sakurai and illustrated by Nakahara. It is the prequel light novel series to Fate/Prototype and drama CDs have also been made using the same voice actors from the OVA.

In Fate/Prototype: Fragments of Sky Silver, most of the story is written in fragments from the various different perspectives of each of the Masters, Servants and Magi who are either participants or observers in the First Holy Grail War. Each of the novels focus on one or a couple of different protagonists. For example:

The story of Fragments of Sky Silver is set in the city of Tokyo in 1991, where the First Tokyo Holy Grail is being initiated. The main locations covered by the novels and drama CDs include the districts of Akihabara, Ikebukuro, Ginza, Setagaya, Minato, Shimabashi, and the city of Yokohama, with one major battle being carried out on top of Tokyo Bay. Other prominent places featured are the Sunshine 60 building, Yushima Seidou, and the Old Shimbashi Station Railway History Exhibition Hall, where the Greater Grail is located.

The story begins with a young Ayaka Sajyou who wakes up to a normal morning breakfast with her father and older sister, Manaka, unaware that a battle of frightening proportions has now begun in Tokyo. This battle is the Holy Grail War, the first of a series of mutual slaughters where seven Magi and seven Servants team up together to fight in a battle royale to win the Holy Grail, a mystical omnipotent wish-granting device which can grant wishes.

One of the Masters participating in this fight is Ayaka's own older sister 'Manaka' who has summoned Saber (Arthur Pendragon), one of the most excellent knight classes as her Servant.

As each of the Seven Masters summon their Servants and fight, more of the mysteries surrounding the Holy Grail are revealed, culminating in a epic battle that will test loyalties, forge new alliances, and makes one question, who is the real Master in this Holy Grail War?

Characters in Fragments of Sky Silver[]

An innocent little girl who is barely 12 at the time of the Grail War. She is the master of Saber and holds the Master's Degree of the first-ranked magus, Seraphim. She is the older sister of Ayaka Sajyou, the main protagonist from Fate/Prototype.

The fabled King of Knights. A blonde swordsman who is summoned to be Manaka's servant in the 1991 Tokyo Holy Grail War. His wish is to save his homeland. He is the main protagonist in both Fragments and Fate/Prototype.

Berserker's Master. An average high school boy who grew up in Setagaya knowing nothing about magic. He winds up getting involved in the Holy Grail War by accident, and seeks to stop it.

An English scientist and doctor who serves as Tatsumi's Servant. His Noble Phantasm takes the form of a miracle drug.

Archer's Master. A half-Japanese / half-German magus from Germany. Professionally, she works as a professional camerawoman who frequently travels to conflict zones.

A loyal archer who hails from one of the ancient former regions of the Middle East. He is Elza Saijo's Servant.

Lancer's Master. A magus associated with the Clock Tower who was about to be sealed before he was chosen to fight in the Holy Grail War. His wish is to reach the Root.

A beautiful and mysterious lance-wielding maiden who acts as Nigel Saward's Servant.

Rider's Master. An unorthodox magus who combines science and magic in the hopes of prolonging the Isemi Clan's dying magical bloodline.

An Egyptian Pharaoh who is summoned at the behest of the Isemi Clan. He is Shizuri Isemi's Servant and one of the strongest Servants in the war.

Only introduced in Fate/Prototype Material. He is Caster's Master and the father of Misaya Reiroukan. He is always referred to as "Master Reiroukan" in the novels and drama CDs.

An alchemist who is summoned to serve as Master Reiroukan's Servant. He bonds with Misaya Reiroukan over the course of the Holy Grail War.

A middle-aged master who comes from a magus lineage. He is Assassin's Master.

Seiji Jinga's Servant. Being an assassin, she is a master of assassinations and poisons capable of concealing her presence. She becomes the basis for the Miss Mary rumors.

She is the previous version of Shirou Emiya and the main character in Fate/Prototype. In Fate/Prototype: Fragments of Sky Silver, Ayaka appears as her 8-year-old self and is a bystander for most of the first war. She appears to be a very insecure person, but heavily admires her older sister, Manaka Sajyou. In the 1999 Holy Grail War, she later becomes a Master under The Seventh Degree, Princes.

He is a magus and the father of Manaka and Ayaka. In Fate/Prototype: Fragments of Sky Silver, he shows regret at not being a better father to Ayaka and Manaka.

She is the previous version of Rin Tohsaka and a protagonist in Fate/Prototype. In Fate/Prototype: Fragments of Sky Silver, Misaya appears as her 8 to 9-year old self. She is often described throughout the novels as a girl with ruler qualities and has an abundant talent for magic. She later becomes a Master in the 1999 war under The Second Degree, Cherubim.

Misaya's mother who was evacuated to the Reiroukan's villa in Izu with the rest of the Reiroukan family servants prior to the start of the Holy Grail War.

In Fate/Prototype: Fragments of Sky Silver, Aro is a young boy whose body is entirely sustained by medical machinery in a room located deep within the Isemi's hideout at the base of the Okutama mountains. He later meets Ozymandias and gives him a reason to fight in the Holy Grail War. In Fate/Prototype, Aro becomes a Master under The Third Degree, Thrones.

In Fate/Prototype: Fragments of Sky Silver, Sancraid is the church overseer for the First Holy Grail War. He mostly takes on a bystander role for most of this war and handles the clean up for most of the battles. He is not mentioned by name in either the novels or the Drama CDs, and is simply credited as "Church Man" in the Drama CDs. Despite that, he has a more prominent role in the Drama CDs.

She is the younger sister of Tatsumi Kitano, one of the Masters in the 1991 Holy Grail War. She appears in the bonus acts.

A high school girl who is rescued from a gang of hoodlums by Assassin. She subsequently gets kidnapped by her to be used as a sacrifice for the Greater Grail. However, Manaka is later convinced to release her and entrusts her to the Overseer's care. Her memory is then erased after the Overseer questions her. Her friend Yuko is another one of Manaka's victims.[1]

An old reporter friend of Elza Saijo who reaches out to her for information regarding the strange incidents in Tokyo.[2] He appears in Volume 5 of the Drama CD and later gives Hiroki and Saber the location of the Greater Grail.[3]

In the ancient past, Nefertari was one of Rider/Ozymandias' wives. She appears in flashbacks in Fate/Prototype: Fragments of Sky Silver.

In the ancient past, Moses was Rider/Ozymandias' best friend and brother growing up. He appears in Rider's flashbacks in Fate/Prototype: Fragments of Sky Silver.

A vicious Roman general who once fought against Saber, during the time of the Roman Empire's conquest of Britain. He appears in one of Saber's flashbacks in Fate/Prototype: Fragments of Sky Silver.

The female version of Merlin. A half-human/half-succubus mages who served as Arthur's advisor during his reign. She appears in one of Saber's flashbacks in Fate/Prototype: Fragments of Sky Silver and later appears in Arthur's dream prior to being summoned to 1999 Tokyo for the Second Holy Grail War.

Fate/Prototype: Fragments of Sky Silver was first released on September 10, 2014 by TYPE-MOON Books. The last volume was released on April 26, 2017.

The series began being serialized as Drama CDs, with the first CD being released on the 25th of October, 2017. The last drama cd was released on November 27, 2019. The drama cds also come with a bonus book with additional sidestories and original soundtrack CDs.

For the drama CDs, most of the characters are voiced by the same seiyuus as from the Fate/Prototype OVA and Fate/Grand Order. Here is the list of the current cast: 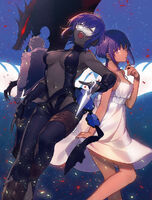 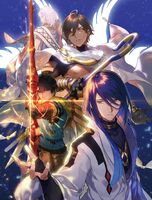 Volume 5 - And so, the Holy Sword Shines

The name comes from the colors of Saber's armor. While Sakurai has discussed some elements of the story with Nasu, he is not a primary supervisor like with other Fate stories. She created the six new original Servants herself, seeking out advice on some elements.[4]