The series takes place in Fuyuki City in an alternate timeline of Fate/stay night. Kiritsugu and Irisviel helped end the Holy Grail War ritual before it could start, sealing Ilya's memories away and allowing her to grow up as a normal girl. Shirou and Ilya live a peaceful life as brother and sister, without knowledge of magic, under the care of Sella and Leysritt, while their parents are abroad.

The Class Cards, malicious fragments of Heroic Spirits, later appear in Fuyuki, and they are first believed to be remnants of the Holy Grail War. It is later revealed that they were actually brought forth from a parallel world along with Miyu, the completed Holy Grail of that world. Various aspects of the setting and events are a parody of a typical Magical Girl series, and Illya, being a fan of such series, is quick to notice them.

The author says that the setting should not be directly compared to that of the main franchise, saying that many of the elements may differ.

Two sentient wands that can turn their owner into Magical Girls. They were given to Rin and Luvia by Zelretch to aid them in dealing with Class Cards.

First stick, Ruby, is identical in appearance to the one used in Fate/hollow ataraxia by Rin, with a five-pointed star inside a winged ring on its “head”, and small cross on the other end. Second stick, Sapphire, has a six-pointed star on its head, and what looks like a rope ending on its other end. In addition, Sapphire's “wings” resemble a ribbon or Butterfly wings, giving it's head an appearance of a brooch. Both sticks are reduced to only their heads when they are not used by Magical Girls. In this form, they can freely levitate and use their wings to gesticulate. Ruby refers to Sapphire as her “younger sister”, in spite of also saying that both were created at the same time, and is shown to exhibit a protective attitude towards her.

The ritual to sign a contract between a Kaleidostick and its user is fairly simple and includes a small amount of user's blood to be given to the Kaleidostick followed by willingly grasping the handle of the stick. As Kaleidosticks themselves choose their masters, the ritual won't work without their consent, just as the contract can only be terminated from their side. Once the contract has been established, sticks will transform their masters into Magical Girls and provide them with unlimited amount of magical energy (although at a limited rate) by using Second Magic to connect with alternate realities, similar to how Jeweled Sword works. Transformation and magical energy supply will be canceled if the Kaleidostick is separated from its user a distance greater than 50 meters or for a duration longer than 30 seconds.

Magical Girls can use this magical energy to perform high-level Magecraft without formal knowledge of magical theory, such as flying, raising magical and physical shields and enhancing their own physical abilities. It was stated that a Magical Girl's imagination is the only limiting factor in utilizing the magical energy provided by the Kaleidostick – Illya was able to fly without much effort because she had an image “Magical Girls can fly” in her mind, while Miyu was unable to ignore physical laws, and was only able to fly by imagining a “foothold” and strengthening the air below her feet to form one.

Kaleidosticks have shown remarkable amounts of endurance, as evidenced by being able to withstand a direct sword slash from Saber and a crushing attack from Berserker (although any accompanying magical energy had to be blocked by a raised shield, otherwise it would have hit their wielder).

Also, Kaleidosticks were shown to have some additional abilities (“24 secret abilities”, as Ruby states) that include a cellphone-mode for communicating with each other (complemented with an ability to establish a video-link and project the feed on a wall) and an ability to make predictions of future based on statistical extrapolation, as well as printing them out. However, these abilities were used solely for comical effect.

When Illya uses two Kaleidosticks in order to save Miyu, the two are combined as one and form into Zwei (two, in German).

A two-volume manga series that introduced the story. Illyasviel von Einzbern is a seemingly ordinary middle school student with no knowledge of the magical world. When the Kaleidostick Magical Ruby selects Illya to become its new master, she becomes a Magical Girl who collects Class Cards together with another Magical Girl, Miyu.

Rin and Luvia were originally Magical Girls that were supposed to collect the Cards, but after trying to use Class Cards in a quarrel, Kaleidosticks abandoned them (in mid-air) and went on to independently search for new masters. Ruby made a contract with Illya, and Sapphire with Miyu.

After a series of battles, Illya and Miyu were able to collect all Cards and became good friends, while Rin and Luvia remained in Japan by orders of Zelretch.

Second volume cover
Add a photo to this gallery

A second story focuses on a new character, Kuro, who is a girl identical to Illya, except she has a darker skin tone, as well as light pink hair. She emerged from Illya after the seal on her magical energy was unlocked, coupled with her failed attempt to use Archer Class Card. Kuro has been shown to act in an extremely antagonistic manner towards Illya but warmed up to her after they had resolved their differences.

The name is a word play on “2” and the German word “Zwei”, meaning two.

Fifth volume cover
Add a photo to this gallery

Continues right after 2wei ended, where Miyu is captured by new antagonists and sent to another dimension.

The name (similarly to the previous volume) is a word play on “3” and “Drei”, which is German for “three”.

Eleventh volume cover
Add a photo to this gallery

The setting of Fate/kaleid liner PRISMA☆ILLYA expands on elements introduced in 2005 by Fate/hollow ataraxia: the Mimic Tohsaka scenes and the character of Luviagelita Edelfelt. The Character Material book further hinted at the series with details about Illyasviel, Leysritt and Sella normal lives.[2]

Hiroyama explained in the first tankoubun of Prisma Illya that he originally had two plans: One about Rin and Luvia's rivalry in London, and another about Illya as a magical girl. Before presenting the plans to Nasu and Takeuchi, he thought the first plan would be a no-brainer. Unexpectedly, Nasu and Takeuchi chose the second one. It was his first commercial manga. He originally planned for the story to run only for one season, around 15 episodes, but since the serialization became a big success, they modified the plan and expanded the story to keep it going for longer.

In response to episode 15 of Ufotable's Unlimited Blade Works adaptation where Illya is killed by Gilgamesh, Hiroyama tweeted, "Now, I wonder if there are more people who understand why I wanted to draw Prisma Illya."[3] Kinoko Nasu (somewhat jokingly) considers Fate/kaleid liner PRISMA☆ILLYA to be the Illya route.[4]

In 2010, a special chapter was serialized in Comp Ace to celebrate the magazine's fifth anniversary featuring a short crossover manga with the Magical Girl Lyrical Nanoha series.

During the period where the first season of the anime was airing, a light novel adaptation of Fate/kaleid liner PRISMA☆ILLYA was released with 2 volumes. The first volume was published on Aug 1 2013 and the second on Oct 1, 2013. Adapting Hiroshi Hiroyama's original work for the first series, the story is written by Hiro Itou with illustrations by Silver Link and bun150.

Cover of the First Volume

Cover of the Second Volume
Add a photo to this gallery 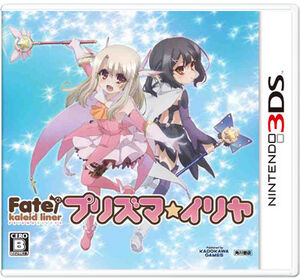 Fate/kaleid liner PRISMA☆ILLYA is a Nintendo 3DS game published by Kadokawa Shoten in 2014 based on the anime series. It was released in September 26, 2013.

The game is an arena fighter where the player alternates between melee attacks and light ranged attacks depending on proximity. Then, there are the elemental and class cards. These are much stronger attacks and will take much larger chunks of health of enemies. Class Cards are even stronger and are useful in finishing a damaged foe. There are 100 different cards in total but, the player can only take 10 cards into a battle and most of them are single-use in battle with a couple having multiple uses. Opponents, on the other hand, tend to have infinitely replenishing elements so, players have to use their cards carefully.

The main game's story has the player have to find the 7 Class Cards around the city in 7 nights but, they can go to up to 3 locations in a night. There are 7 locations in total and the next Class Card's location is indicated on the map. Going to other locations will trigger either dialogue, battle with other characters or 3 random elemental cards. To get a Class Card, the player has to go to that location and fight the Class.

There are four playable characters: Illyasviel von Einzbern (Only one unlocked at the start), Miyu Edelfelt, Rin Tohsaka, Luviagelita Edelfelt.

In addition to single player, there is a local multiplayer option where up to 4 players can play as the 4 characters and fight it out using the rules from the single player.

A 10-episode anime television series adaptation by Silver Link aired in Japan between July 12 and September 13, 2013.

A second anime season, adapting the first half of sequel manga Fate/kaleid liner PRISMA☆ILLYA 2wei! was aired in Japan between July 10 and September 11, 2014.

A few months after the release of Oath Under Snow, the official twitter page for Fate/kaleid liner PRISMA☆ILLYA announced an anime sequel.[1] Being quickly teased at the end of the Prisma☆Phantasm OVA, the project is only much later, confirmed to be taking the form of an another animated movie.[5] A key visual illustrated by Hiroshi Hiroyama,[5] alongside an announcement PV were released and the movie website opened.[6] The movie is titled Fate/Kaleid Liner Prisma☆Illya: Licht - The Nameless Girl (Fate/kaleid liner プリズマ☆イリヤ Licht 名前の無い少女, Fate/Kaleid Liner Prisma Illya: Licht - Namae no Nai Shoujo?), and is set to release in 2021.[7]

Key Visual 2
Add a photo to this gallery

Prisma Phantasm Key Visual
Add a photo to this gallery

Comedic OVA released after Fate/kaleid liner PRISMA☆ILLYA: Oath Under Snow. Return of characters from all series before in a comedy setting similar to Carnival Phantasm.

Key Visual 1
Add a photo to this gallery

Anime End Card 10 (Final)
Add a photo to this gallery 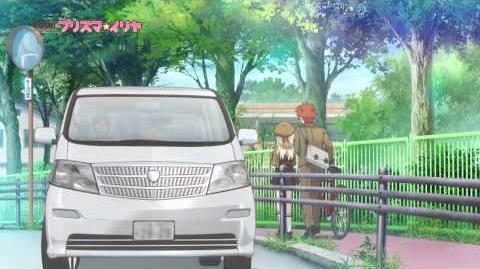 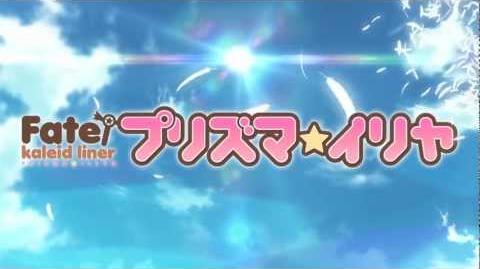 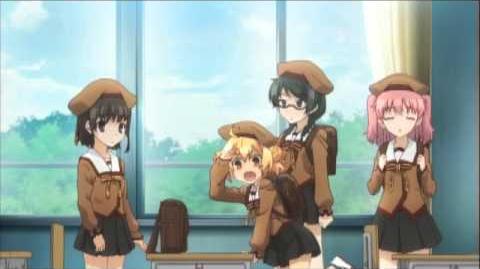 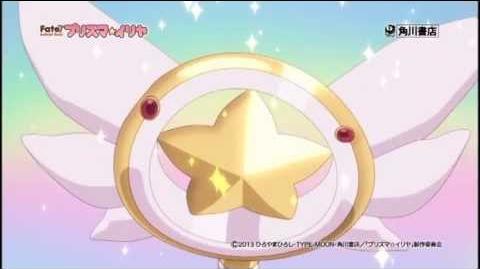 角川コミックスエース「プリズマイリヤ」オリジナルアニメBD付き限定版コミックス予約受付中！
BD Promo
Add a photo to this gallery

Retrieved from "https://typemoon.fandom.com/wiki/Fate/kaleid_liner_PRISMA☆ILLYA?oldid=181702"
Community content is available under CC-BY-SA unless otherwise noted.