Teito Seihai Kitan: Fate/type Redline (帝都聖杯奇譚 Fate/type Redline?) is manga written and illustrated by Ryouji Hirano. It is a revised adaptation of the Imperial Capital Holy Grail Strange Story storyline featured in the Fate/KOHA-ACE. It is currently being serialized on TYPE-MOON Comic Ace web magazine.

The setting of the story is not directly connected to any other Fate work.[1] Kanata Akagi is a boy from a declining magus family who decided not to pursue magecraft and live a normal life instead. His friend gives him a light novel that claims an explosion that devastated the Imperial Capital of Tokyo 75 years ago was caused by a battle between supernatural beings. While going through his late grandmother's belongings, he accidentally activates an hourglass that sends him 75 years into the past. While seeing characters and events that reflect the light novel, he has no idea what a Holy Grail War or Servants are and is out of his depth when he accidentally summons Saber. 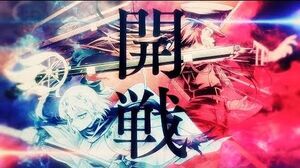