Fate:Lost Einherjar - Aslaug of the Aurora (フェイト:ロストエインヘリャル - 極光のアスラウグ?) is an in-production novel series to be written by Hikaru Sakurai and illustrated by Shirow Miwa.

The Valkyries dancing the skies and Dwarves forging the weapons of the gods, and even the gods and giants themselves disappeared. The battles between brave heroes and dragons became legends of a distant past. The supposedly everlasting flame flicker atop Mt. Hindarfjall did not last, and the 9 Norse Worlds were reduced to only Midgard. Even the Yggdrasil at its center is now gone.[1]

The age of the gods was over and the age of the humans had began. Human braves live plundering across the seas.[1]

Aslaug is the daughter of dragon-slayer Sigurd and valkyrie Brynhild. She long slept under the great harp of magical silver, and what awaited her upon her awakening was a world of men without gods. The Scandinavian Peninsula of the 9th Century. There she had a fateful encounter with Ragnar, young warrior of the vikings, the bold men who claim to serve the disappeared Norse gods and to be braves deserving of guidance to Valhalla.[1]

This truly was the chance meeting between the last Valkyrie and the last Einherjar.[1]

Fate:Lost Einherjar takes place in the divergent timeline of the World of Fate/Apocrypha ten years after the end of Fate/Apocrypha. It is set in Oslo, Norway in 2014. The previous year, a certain animated blockbuster based on NorwayWP had been released.[2]

The 21st Century Scandinavia is the stage for the Doubles Subcategory Holy Grail War, a battle where groups of two Servants fight as duos. Fate:Lost Einherjar - Aslaug of the Aurora is a story centered around Aslaug and Ragnar, the two Servants summoned for this battle by Remina, a mage of the former Yggdmillennia clan. The story will solve several mysteries and contradictions and unveiled their checkered pasts while alternating between two chronological points, the Sub-Grail War Arcs, which portray the present, and the Lifetime Arcs, which are the story of how Aslaug and Ragnar met in the 9th Century Scandinavia.[1]

What is the reason behind Aslaug and Ragnar's memory inconsistencies? What's the meaning behind Ragnar's words? What do the two crows dancing in the skies of present day Scandinavia represent? Stay tuned for the tale of unknown destiny in a new setting with new Heroic Spirits![1]

Huginn and Muninn
Odin's familiars, flying in the skies of modern Scandinavia

Skáld
A bard Aslaug met who is accompanied by two ravens 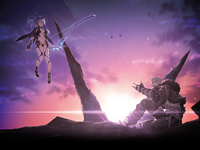 The title was first announced in a tweet advertising TYPE-MOON Ace Volume 14.[3] The first volume's prologue was included in the magazine ahead of the volume's official release.

Series illustrator Shirow Miwa had previously worked for Type-Moon as the illustrator for Sigurd and Brynhildr in Fate/Grand Order, but he had also secretly designed other Norse characters as fan art on his own time, not as something Type-Moon asked him to do.[4] He eventually submitted the designs for approval after seeing how Columbus Lily had also started as fan art,[5] which led to the development of this series and the designs being canonized.[6]

Shirow Miwa announced that he would be selling in the Comiket 100, a doujinshi called [Romancia:Aurora] with rough sketches of the characters and other unnoficial illustrations. [7]

Fate:Lost Einherjar is the first Fate series to have a colon in the title instead of a forward slash.