The 17th Century. The "Salem Witch Trials" that occurred in the Puritan colony of Salem. Abigail Williams was one of the first to display symptoms of being possessed by the devil. Many villagers complained that over the span of roughly one year, many other young girls seemed to have contracted the abnormal condition of being 'possessed by demons'. As a result, this led to a tragedy where 200 people were arrested, with 19 of them being sentenced to death by hanging. In addition, 2 of them died in prison, and 1 died due to torture. The real motives of those young girls, and the factors that triggered the event, are still a mystery even today.[1]

The Puritans who highly believed in virtuous poverty crossed the sea to escape from oppression from the authoritative Church and reached the New World. However, they were eventually caught up to and cornered. The arguments of their protests were aimed towards their neighbors.[1]

"Heroes" truly rise in a realm of oppression and corruption————And the pure convictions that they conducted themselves by became tools to inspect others, rearing jealous suspicion and selfishness in their restless lives of cyclic strife and plundering in the colony.[1]

————And eventually, from the bottom of their hearts, they insanely started to seek out "Witches". "Our misfortune and suffering must be the deeds of the devil", so they claimed. In the end, witches were found in Salem, and the door of the horrifying Witch Trials opened. A great turmoil that became the "keyhole". The young girl that reflects the desires of the masses as the "key". When the two become critical factors, now, which is the sinful one?[1]

That is to become a sinner, to become the Seventh Knot. Seeking for atonement in the heretical land, that is the harvest of the devil.[1]

———the innocent girl points, "Who is the next sacrifice?"[1] 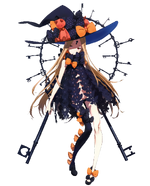 As a follower of the Puritan sect, Abigail is an innocent girl who respects God and never fails to give her thanks through prayer. Sensitive and naive, she is merely a girl of her age.[1]

Gilles de Rais
Abigail wonders why he is kind when he comes to her.[2]

Thomas Edison
He taught her how Massachusetts became part of the United States of America, though in the end his story took six hours.[2]

Geronimo
Abigail is scared of Geronimo, but sees that he is a very earnest person so she'd like to talk with him eventually.[2]

Queen of Sheba
They frequently speak with one another. But when asked about King Solomon, she immediately dodges the question saying: “From this point on, I’ll be charging you”[2]

Eventually, it was revealed that Abigail is a Pseudo-Servant, converted into a gateway and a space-time key by Raum to open a gate to bring an Outer God, Sut-Typhon, to Earth in order to continue Goetia's plan of "salvation".[3]

Her Class Skills are Existence Outside the Domain (EX), Insanity (B) and Divinity (B).

Loss of Sanity (正気喪失?) is the insanity exuded by the evil god within her can easily break down the fragile common sense and morals of humans.[1]

Prayer of Faith (信仰の祈り?) is the conviction of the Puritans that honors daily prayer and poverty.[1]

Witch Trial (魔女裁判?) is a skill that draws out acts of jealousy and hate towards her without volition, giving rise to a chain of misfortune; she is an innocent threat.[1]

Retrieved from "https://typemoon.fandom.com/wiki/Foreigner_(Fate/Grand_Order_-_Abigail)?oldid=130914"
Community content is available under CC-BY-SA unless otherwise noted.