TYPE-MOON Wiki
Register
Don't have an account?
Sign In
Advertisement
in: Characters in Fate/Grand Order, Archer-class Servants, Servants,
and 16 more

A temporary Servant manifested by the Counter Force for the purpose of acting against the incineration of humanity.

The era that Fujino lived in was turned to ash by the incineration of the anthropic principle. She too was burned to ashes, but her peculiarity was not overlooked by the Counter Force of the world. The Alaya-shiki adopted her superpower as a military asset for the sake of overturning the incineration of the anthropic principle and she was summoned by Chaldea as a transient Servant. For her, this current self is nothing but a "dream". Just like Shiki, this is an illusion of a single night that she is seeing just before being burned to ashes, and which will simply disappear if the incineration of the anthropic principle is not overturned. A person with normal sensitivities would fall in a state confusion and panic, but Fujino has smoothly accepted this abnormality. She perfectly understands her position as someone summoned as a Servant and probably will endeavor to help the Master, within the limits of what she can do.[1]

A young girl in her late teens. The picture of a conservative woman who always stands behind her husband. A beauty that makes you think of a japanese doll.[1] 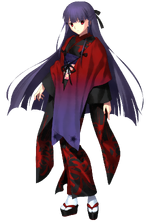 CIPA; a young girl whose sense of touch - one of the five senses - has gone numb and thus lives without knowing pain. Due not knowing pain, she could not sympathize with the feelings of others and became isolated from the circle of people. Possessing a high intellect since she was very young, Fujino kept her CIPA hidden and feigned her own heart - all in order to exhibit to the surroundings that "I'm a normal person" and protect herself.[1]

Although she is not very good at dealing with the more violent side of men, she also thinks that such childish aspect of them is adorable. Therefore, rather than affection, it seems that she tends to hold longing (feelings of infatuation) towards a complete rational man.[1]

In that sense, she is similar to Shiki who shows no mercy in her decisions.[1]

Possessing feminine mannerisms, verbal expressions and personality, but her hobbies are something far removed from girlish tastes. She prefers dark things that one can secretly enjoy alone, such as viewing horror movies.[1]

The person herself will not be aware of this until the end, but she has a latent predisposition to sadism. This is the reason why she becomes cruel・coldhearted・of bad taste as soon as she is driven to a corner.[1]

With a mild and passive personality. Her manners are somewhat gloomy, but there is also a trimness that seems to ooze out from her.[1]

A Servant added to the Collaboration Event "Reissued Edition: Kara no Kyoukai/the Garden of Order -Revival-". She does not appear in the scenario. A special participation during battle as a guest.[1]

Mystic Eyes of Distortion is amongst the many superpowers designated as Mystic Eyes, this one is of the highest grade. A superpower among superpowers, a rare item among rare items. Regardless of being organic or inorganic, it perceives and twists "anything that exists as physical matter" as if a single printed image - spinning and severing it regardless of hardness・scale.[1]

Residual Sense of Pain (痛覚残留, Tsūkaku zanryū?) is the deathly pains that repeat themselves despite having been completely cured. Proof of humanity. In order to seal away the girl's superpower, the Asakami clan has locked up her sense of touch.[1]

It is not like she enjoys being isolated, but she has the bad habit of strolling about by herself for some reason or another. Stalking and the likes are her forte. Her Independent Action skill, would make her run out of magical energy and should be very tough for her, but she does not take notice since her sense of pain is weak.[1]

Her Magic Resistance Skill is the benefit of being a Servant. Fujino, a frail user of telekinesis, is unconsciously forming force fields when fighting.

With her Territory Creation Skill, her eyesight can be considered preeminent because her abilities include a distant sight ability close to Clairvoyance. Her power to comprehend the space around her and see her target behind shelters comes close to being a form of Bounded Field.

Clairvoyance (Darkness): Some lights can only be seen by eyes that lost their lights. Strictly speaking, this is the psychic ability Clairvoyance. It’s not the same thing as the Clairvoyance mages use (Senrigan). Depending on how she uses it, she can have a bird-eye’s view of the scenery, making it distinguishedly compatible with Mystic Eyes of Distortion.

Takeuchi Takashi is the character designer for Archer.[1]