The youngest of the Gorgon Sisters that appears in Greek Mythology. Her original True Name is Medusa. The mere shadow of a cursed growth. A condition in which, due to some factor, the monster disposition that is her (original) foundation was considerably emphasized. She is in a stage that is on the verge of a complete metamorphosis from a goddess to the behemoth/monster “Gorgon” and, originally, is not something that would be summoned as a Servant.[1][2]

————An existence that might already be called the Queen of Magical Beasts.[1][2]

Having materialized as an existence extremely close to the “Gorgon monster”, she is essentially a threat to mankind. Although she has been summoned as a Servant by means of Chaldea's system, careful attention is necessary when handling her. If one lets their guard down, even the Master will have their life forfeit.[1][2]

In a way, one can say that Gorgon is a sample demonstrating the astounding state of the art Chaldea summoning formula. Such a mechanism that summons not only the possessions and divided spirits (bunrei) of the gods, but even also such a dangerous existence as a Servant; even in the world of magic, one simply cannot call it anything but a rare occurrence.[1]

If one included the non-human, monstrous parts of her body, it would result in substantial height and weight values.[1][2] She is bigger than Humbaba in the Cedar Forest. Her upper body is 10 meters long and her total length, including its tail, is over 100 meters.[3] 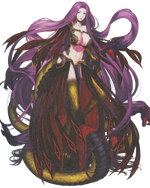 Gorgon was once a goddess, renewed as an existence of a monster that devours humans. A portion of her body resembles that of a human, but even so, her disposition is that of a powerful predator, an avenger embodying ferocity. The vestiges of what once was one of the violet-haired goddesses, who had lived in a small isle ever since time immemorial, is but her outward appearance. Her nature is already close to that of the monster Gorgon, who had took in her beloved sisters and had pulverized the many heroes who had dared embarked upon the isle. She comprehends human speech by means of an exceedingly high intelligence; she does not fall to madness, and it is not that her mind is being contaminated————yet above it all, a mutual understanding with her is essentially difficult.[1]

Gorgon has a degree of awareness of being a vessel upon materialization.[1]

If by any chance, they manage to deepen the bonds with each other... her Master will then acquire a great power. However, one should nonetheless realize that Gorgon is a diverging existence with a different standpoint from humans. Both her affection and her love————are not meant for kinship with humans.[1][2]

Angra Mainyu / Edmond Dantès / Jeanne d'Arc (Alter)
"Hahaha! Interesting! This lot stayed as human even as they estranged themselves from being human!"[1]

Hessian Lobo
"Feeding...... You need not such, I suppose. You are one who procured your own spoils."[1]

Medusa / Medusa (Lancer)
"What a strange feeling. The more I look at them, the more the feelings that I once had dwells within me...... as though like that of a human."[1]

Perseus
(She does not individually recognize him as the Perseus who had once fought Gorgon, but she instinctively harbors unpleasant feelings and anger towards him who holds a portion of her corpse turned into a Noble Phantasm.)[1]

The Holy Grail’s influence summons Gorgon in northern Mesopotamia. Eventually Kingu finds her and uses the Grail to restore her Divinity. This results in her synchronizing with Tiamat’s consciousness, gaining the Authority Potnia Theron that allows the creation of monsters.[4][5] The synchronization also deluded her into believing she is Tiamat's second coming, and decides to take revenge on humanity in her stead.[5][6] However, because she isn't Tiamat, Gorgon isn't able to use Potnia Theron to create monsters by herself.[5] Thus, she is forced to capture humans and bring them to her temple in the Cedar Forest, the Blood Fort, where they're converted into Demonic Beasts.[5][7] They are then sent out to capture more humans to bring them back to the Blood Fort so more Demonic Beasts can be created.[7] Gorgon, Ereshkigal, and Quetzalcoatl are eventually convinced by Kingu to become the Three Goddess Alliance.[4][8] However, only Gorgon is actually pursuing the Alliance's goal of destroying humanity, using her Demonic Beasts to do so.

Ignoring Kingu’s plan for her to awaken on the Day of Rebirth, Gorgon burrows to Nippur where Kingu is. She emerges and quickly kills the soldiers that were accompanying Ritsuka’s party. Kingu reminds her of the original plan, to which she replies she merely wanted to see what they were doing. She orders Kingu to stand back while she prevents the group from retreating to the Northern Wall. The group is forced to fight her when she blocks their escape, but she regenerates too quickly for them to wound her. Ushiwakamaru then arrives to hold her off while the group escapes. Gorgon overwhelms her and breaks through Nippur’s walls to pursue the group. Leonidas uses Thermopylae Enomotia to protect them from her Mystic Eyes of Petrification, but he isn’t able to avert its petrifying effects. Before completely turning to stone, he reveals her True Name to her disgust. Gorgon then prepares to launch a full invasion on Uruk, but Kingu advises her not to. They remind her the Alliance will be dissolved once Uruk falls; the second generation is reserved for those battles. Until the 100,000 new offspring awaiting birth at the Blood Fort are born, the Alliance must continue. They also say ending humanity so quickly won’t be satisfying, believing time should be taken to torment them. They remind Gorgon that she is an incarnation of Tiamat, and advise her to return to the Blood Fort. Gorgon agrees and leaves, warning the invasion will come ten days from now.[7]

In the anime adaptation, Leonidas has his Spartan soldiers attack her by throwing their spears, but her hide proves too thick. He then gathers his soldiers to activate Thermopylae Enomotia to block Gorgon’s Mystic Eyes of Petrification. Holding off long enough to initiate his Noble Phantasm’s counterattack, Leonidas throws his spear through Gorgon with enough force to leave a hole in her. He reveals her True Name to her disgust before he is completely petrified. After he disappears, Ushiwakamaru fights Gorgon again, using Dan-no-Ura - Eight-Boat Leap. She seemingly dies after unleashing her final strike. Gorgon emerges from these two battles with her wounds completely regenerated.

After ten days Gorgon launches her invasion, which Quetzalcoatl, Jaguar Man, and the soldier of the North Wall are holding back. Her divinity is reduced when Quetzalcoatl throws the Marduk’s Axe to destroy the Blood Fort. She encounters Ritsuka’s party when they enter the depths of the Blood Fort. Mash asks her what she wants revenge on, having learned how Gorgon’s Demonic Beasts are created. It would be understandable if she wanted her stolen land back, or if she wanted to establish her own kingdom. Gorgon answers she has nothing left but vengeance, declaring she’ll die after killing everything. She deduces Mash lived a sheltered life, as she doesn’t know the ugliness of the world. Seeing no point in talking with her, she asks Ritsuka if they understand. Ritsuka answers they don’t, and Mash joins them by calling Gorgon’s twisted form a reflection of her heart. Ishtar calls Gorgon a fake who became a goddess with the Grail’s power. Even with Potnia Theron, Gorgon needs other creatures to create Demonic Beasts unlike the real Tiamat. Tiamat herself would never use humans to get revenge on them. Medusa tells Gorgon that she isn’t a Tiamat, but a monster who forgot she truly is. Gorgon panics upon seeing Medusa, demanding for someone to remove from her temple. She then fights the group, her Mystic Eyes being offset by Medusa’s own. With her defeat, the temple begins to collapse, yet she still lives thanks to her immortality. Medusa then slays her with Harpe, seemingly dying in the process.[5]

Gorgon is amongst the "Babylonia" Singularity Servants to aid Chaldea against the Demon Gods Pillars.[9]

Her Noble Phantasm is Pandemonium Cetus. By renouncing to her last vestiges as a goddess, the shadow of her former self that she becomes at the very end - the “Gorgon monster” - is temporarily materialized and all life within the designated territory is liquified. Instantly robs the lives of humans, and even Servants are given severe damage. Despite being a strengthened version “Self Seal, Dark Temple”, the Noble Phantasm that Medusa possesses when she is a Rider Class servant, it does not require setup time and is invoked with just the release of it's True Name. Effectiveness is somewhat low against inorganic-type opponents.[1][2] Its power is great enough to cut off Tiamat's damaged horn, which had recently been cracked by Quetzalcoatl's Xiuhcoatl.[11][12]

Divinity
???
Mystic Eyes
???
In the Babylonia Singularity, Gorgon's power was greatly enhanced due to her using the Holy Grail to turn back into a goddess and by gaining access to Potnia Theron, Tiamat's Authority.[3][13] Even though she was an incredibly powerful entity before gaining access to both the Grail and Tiamat's authority, in this state, she is powerful enough to paralyze even Merlin by simply scowling at him, without activating her Mystic Eyes, however, by concentrating, relaxing and breathing deeply, one is able to break free. Having been saving Magical Energy, Merlin refuses to fight her the moment she activates her Mystic Eyes of Petrification, referring to them as his one true weakness. They are blocked by Mash's shield. Gorgon can also release beams from her gaze, which are able to penetrate Leonidas' Thermopylae Enomotia. Benkei also states he would be no match against her.[3] And she was able to defeat Ushiwakamaru with ease, displaying great speed in their battle despite her giant size. The more Gorgon slaughters humans the more power she gains.[14] However, even though she's stronger than Ishtar,[15] she'd still be no match for the real Tiamat,[13] nor Quetzalcoatl.[16]

Thanks to the magical energy supply of the Holy Grail, her body regenerates the second she's wounded. However, Gorgon denies her relying on the Grail's power to kill humans nor in her battles against Leonidas and Ushiwakamaru.[3] Even when weakened after having lost most of her Divinity from Quetzalcoatl destroying Tiamat's temple with the Axe of Marduk, she was still able to fight Ritsuka's party and she still retained her immortality and was able to completely heal her wounds in an instant.[13]

Shimokoshi is the character illustrator for Gorgon.[1][2] Hikaru Sakurai is the scenario writer for her character.[1]

"Medusa in the state of 50% monsterization, or something like that kind of feeling. Her character has changed a lot from the initial setting; there were a lot of drawing changes, like her turning white in her third stage, or her turning into a colossal size (perfect monster transformation). The design idea is Fate's Dark Sakura-ish, but seems like the breasts are bigger huh."[1]