Gráinne (グラニア, Gurania?) is a princess featured in the Fenian Cycle of Irish folklore.

Gráinne is the daughter of Cormac mac Airt. Grainne was arranged to be the bride of Fionn mac Cumhaill but Gráinne, having fallen in love with Diarmuid Ua Duibhne at her wedding party, placed a geis upon him to run away with her. The tragic love story of Diarmuid and Grainne later became the story model of Guinevere and Lancelot.[1]

Gráinne was a beautiful woman with brown hair that reached her mid-back. She had dark colored eyes and wore a plain white dress. Diarmuid noted that her eyes were similar to Sola-Ui's, especially when the two women were pleading to him for something. 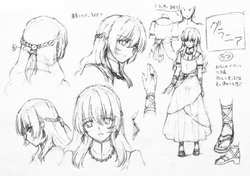 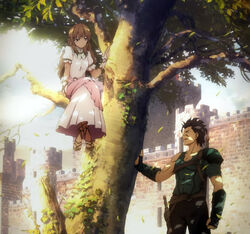 Gráinne and Diarmuid Ua Duibhne
Add a photo to this gallery

In her brief appearance, Gráinne was shown to be deeply unhappy about her marriage to Fionn. She became fixated on the idea of running away with Diarmuid from the moment she first laid eyes on him and expressed joy once Fionn forgave the couple for their actions.

Gráinne appears in a flashback that details her abandonment of Fionn for Diarmuid. Kayneth, being the Master of Diarmuid, witnesses these events through a dream. Kayneth seems to interpret the events as Diarmuid happily stealing his Lord's wife, and accuses Diarmuid of doing the exact same thing with Sola-Ui.

In Sensha Otoko, she is one of the local stalkers in the neighborhood. She is seen stalking El-Melloi girl's older brother.

Gráinne was capable of using the Geis curse, which she used on Diarmuid.

Retrieved from "https://typemoon.fandom.com/wiki/Gráinne?oldid=165294"
Community content is available under CC-BY-SA unless otherwise noted.