Heroic Spirits (英霊, Eirei?, localized as "Legendary Souls") are spirits of heroes who achieved great deeds in life, having become objects of worship after their deaths.[1]

Heroic Spirits are beings of a higher existence, becoming categorically closer to Elementals than wraiths. Differing from how Elementals are "power" granted form using human imagination as a container, they are entirely woven from the ideals of people all throughout.[1] They are freed from the constraints of time itself and removed from the ring of reincarnation, moved to the Throne of Heroes (英霊の座, Eirei no Za?), a place existing outside of both the World and the time axis.[2] The Throne of Heroes is also occasionally referred to as the Ring of Deterrence (抑止の輪, Yokushi no Wa?), referring to how it is mainly used by the Counter Force. Those that become closer to the planet do not mix well with people, so they fall into the categories of Divine Spirits and Elementals.[3]

They can be classified into five primary categories, referred to as Hidden Attributes (隠し属性, Kakushi Zokusei?), when summoned as Servants.

This table includes Servants that are not Heroic Spirits. They have been given designations in Fate/Grand Order. For Servants that have unknown attributes, see here. 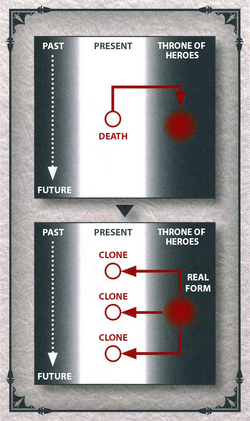 Heroic Spirits are made up of those who truly existed, those only from legends, and those who were never observed at all.[1] Those who existed had belief of their deeds gathered upon their deaths and were sublimated into beings of higher rank, while those who only existed in myths and legends were born from the gathering of those beliefs even if they didn't exist. Those who were not observed are those who made a contract of some sort with the World during their lives and subsequently became Heroic Spirits and Counter Guardians respectively after their deaths as compensation. Hassan-i-Sabbah is said to be one who existed, Heracles and Medusa are said to be those who existed in legend, and EMIYA and King Arthur are those who became or will become Heroic Spirits after the fulfilment of their contracts.[2] The phenomenon applies to any human, animal, or machine that has left behind great enough achievements, but weapons becoming Heroic Spirits from being worshipped as the "greatest weapon of that era" must harbor a soul to achieve such a status.[6] Those where a human creation gains its own will or those created from the congregation of humanity's fantasies are called Conceptual Heroic Spirits (概念英霊?), including those like Nursery Rhyme and machine Heroic Spirits.[7]

Each Heroic Spirit is a unique existence, "the one and only", who each stood out from the others of their time by performing deeds and possessing qualities that no other possessed. As of the 21st Century, the most recent Heroic Spirits are from one hundred years prior.[8] It is still possible for people to make contracts with the World as Counter Guardians and be summoned from the future into the current age as well.[9] While modern weapons are powerful, it would not normally be possible to summon a "warrior from the future loaded with modern weaponry" because it is difficult for such people to become classified as Heroic Spirits. Modern weapons grant ease of use with the advantage of "anyone can use them as long as they were trained", so those who use them are "faceless heroes" who lack any qualities because they possess "expertise anyone can achieve through sufficient training." Heroes loaded with modern weapons would not become the Heroic Spirit, but rather only the weapon being worshipped so long as it harbors a soul.[6]

The rank of the Heroic Spirit is reflected in the strength they held in life and the popularity they attained after death. While their actions and the weapons they wielded in life will not change from fame, their basic abilities will be affected by the time into which they are summoned. Much like how Divine Spirits require worship and recognition and fall to the rank of Elementals upon it being lost, Heroic Spirits grow stronger with the more people worshiping them to solidify their presence and fall to a state where they do not have much power if they are forgotten. Those that are powerful heroes in their own right will still keep their abilities to some extent even if they were unknown or forgotten. Heroes known by all who also had extraordinary feats, like Heracles, can be considered A-rank Heroic Spirits.[12] Gilgamesh is considered the strongest, Enkidu, while not a regular Heroic Spirit, is considered his equal, Karna is stated to be shoulder to shoulder with him as a servant without equal, Heracles and Saber Alter are at some points called the strongest Servants when summoned. In contrast, Tamamo-no-Mae, Hans Christian Andersen, and Angra Mainyu consider themselves to be the weakest of heroes. Those with only relatively new history will generally be far less impressive in ability compared to ancient heroes of the past and more fragile in their Mystery compared to those with more firm concepts.[13][14]

Heroic Spirits are most normally summoned by the World as a power that protects humans, so they cannot be controlled by humans without something like the Holy Grail or a similar kind of power to summon them. Only the World itself can summon the "main body" of Heroic Spirits, so humans can only summon emanations of the heroes, such as through the Servant system, even with something like a Holy Grail.[2] The souls of the emanations, their information, then returns to the main body upon the death of the emanation, and the main body is able to know about the actions of the emanations as records, as if they are reading books.[2]

As beings outside of time, they can be summoned to any era regardless of the notions of past and future, even if summoned to when their human selves have yet to die or when they have yet to be born.[2]

Those who do not fall under the classification of Counter Guardians are normally not summoned into the World by Alaya, simply being treated as "traditions that lend power to the later people."[3]

Counter Guardian (カウンターガーディアン, Kauntā Gādian?), also called the Protectors of Balance (抑止の守護者, Yokushi no Shugosha?, localized as Counter Force Guardian) is a broad classification of Heroic Spirits made up of heroes who are not worshipped, utilized as a mindless Counter Force. Other Heroic Spirits have a high Divinity and act as existences closer to the planet than humanity, so they are able to avoid being drafted by the Counter Force.[1] Normal circumstances are those where the Counter Force empowers a "normal person" in life to remove the factor that can trigger destruction, eventually causing them to be worshipped as heroes. Those who become heroes in such a manner are then used as Counter Guardians, the "Counter" emphasized because they act with no autonomy of their own and only appear in response to an event.[15]

Anti-Heroes (反英雄, Han'eiyū?) are distorted Heroic Spirits, those who do not fall under description of pure, respectable heroes. Those who are not pure can be considered no different than All the World's Evil, although the degree of such can differ between heroes, allowing some affinity with such curses.[16] They differ from proper heroes who earned their titles in that they were forced to the Throne of Heroes only because of their fate. They can rightfully be called Avenger, the Anti-Hero, the opposite of heroes who were praised as heroes regardless of whether they hated humans or were those that humans hated.[17] They are those who were reviled by the people, but saved people as the result of villainy. As those who "clarify good with evil", they became saviors worshipped and cursed in equal measure.[18] Although evil existences themselves, their actions are considered good deeds according to others, so they become saviors even if they are unwilling as in the case of a human sacrifice. Even should they be evil, those who are sacrificed become a hero once it saves everyone in a village, no matter if the method of sacrifice is to be eaten or buried. With the disgrace being forced upon them saving people, it leads to the birth of a hero instead of a sinner.[19] Differing from something like the notion of a posthumous promotionWP, their state of being is set by the minds of those who set up the existence of the hero. While proper heroes are created from respect, gratitude, and feelings of guilt of mankind, Anti-Heroes cannot be born from such thoughts. "Heroes" who die as "evil" will eventually be treated as victims more as time passes, so they will not stay as "pure evil." Their state of being requires them to be both "victim and assailant", created by humanity but not part of humanity. They are a contradiction that makes them "the enemy of the World", but allows them to be exempt from all of the restraining forces of the World.[19] Despite this, there are no "pure Anti-Heroes", but rather only those who come as close as possible by "doing good despite being evil."[18] They are something that people only wish to exist, something ideal humans have created to act as "sacrifices to deny the original sin." They can be thought of wishes that will never come true, "a synonym for peace."[19] While not proper Heroic Spirits, Medea and Medusa do not truly fall under the category of Anti-Heroes either.[18]

It is possible for those who cannot become true Heroic Spirits to, instead, end up as wraiths. Those who bear the name Hassan-i-Sabbah are Heroic Spirit Candidates (英霊候補, Eirei Kōho?) that have lost their original names, instead taking the form of nineteen wraiths all vying to become the "Leader of the Assassins."[23][24] Within the Holy Grail War system, summoning a hero that does not exist can lead to a wraith whose characteristics match the legend being summoned, such as Assassin filling the role of Sasaki KojirouWP. It is unknown where they normally exist, due to not being part of the Throne of Heroes.