TYPE-MOON Wiki
Register
Don't have an account?
Sign In
Advertisement
in: Characters in Fate/Grand Order, Berserker-class Servants, Servants,
and 15 more

Berserker of the Bakumatsu

The Vice-Commander of the Shinsengumi, a security organization active around Kyoto during the Bakumatsu period, Hijikata Toshizou. Upholding strictly absolute discipline within the squad, he is a feared demon of a vice-captain even amongst the peerless swordsmen that are his squad-mates.[1]

A samurai who threw away his pale blue haori, put on western clothing, picked up a gun and continued to fight against the changing era in order to follow through with his own truth.[1]

Hijikata's life ended as the samurai was shot to death at Hakodate. 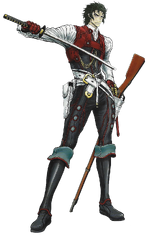 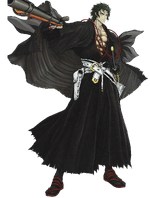 Although a Berserker, normal conversations are possible. Contrary to his demon-like fighting style, in the battlefield he is a pragmatist who also has the flexibility to employ any means necessary to win. That being said, he doesn't endorse the ruthlessless of characters such as Nobunaga. When the Master that summoned him has given up to fight, he will instantly become a target for purging.[1]

In battle he rages wildly like a devil yet retains his rational aspect as a tactician, a rare type of Berserker. The demonic vice-captain bearing the brand of loyalty ---Shinsengumi, advance![1]

Many of Hijikata's lines, particularly during his Noble Phantasm, indicate that the Shinsengumi will not or cannot perish so long as he keeps fighting, and indeed he initially refused to acknowledge his condition as a Heroic Spirit because doing so would have meant admitting that he had been defeated. Although his identity marks the defeat of the Shinsengumi as a whole, he claims to also be forward thinking and does not dwell on the past or future. While Hijikata is not fond of younger girls, particularly those who are childish (such as Nobunaga or Chacha), he is noted to be fond of mature women with large breasts (such as Carmilla and Passionlip) and is quite bold when interacting with them.

In GUDAGUDA Legend of the Imperial Capital Grail, it was shown that Hijikata has incredible mentality as he was visibly not affected by the Holy Grail.

Hijikata greatly enjoys chilled pickles and would be visibly upset if there is a shortage of pickles.

Afterward, Hijikata founded his own Shinsengumi, with Nobbus serving as additional members. They are regular enemies of the Oda Shogunate led by Oda Nobukatsu using Oda Nobunaga's name. Ritsuka's party comes across one such battle in Kyoto. Okita Souji recognizes Hijikata from a distance and gets closer to make sure it is him. Hijikata notices her and immediately demands her help, but Okita is confused about the situation. Nobunaga prepares to punish her brother, Nobukatsu, for taking her name when Hijikata stops her, as Nobukatsu is his prey. Okita stops them before a fight can ensue. Hijikata then has Okita accompany him back to Shinsengumi headquarters.[4]

Both parties eventually learn from Hijikata's Nobunsengumi messenger lthat Ronin plotting to burn Kyoto are going to meet in secret at the Ikedaya Inn.[5][6] Hijikata arrives at the inn later that night and helps Ritsuka and Okita destroy Saigou Edimori's Mecha Nobbu. Edimori surrenders afterward, and he is captured for interrogation. Nobunaga and Chacha then arrive with a captured Katsura Tesla, who surrendered after the Nobbu UFOs were destroyed. However, the two inventors flashbang the group, and escape while Nobunaga and Hijitaka argue. The group learns from the inventors boasting as they escaped that their base is in Toba-Fushimi. Okita collapses from overexertion afterward.[7]

Back at Shinsengumi headquarters, Chacha argues with Hijikata about taking Okita into battle to Toba-Fushimi when she isn’t well enough. However, Okita joins him anyway, causing Chacha to leave, but not before giving medicine to Okita. The group then leaves for Toba-Fushimi.[8]

Arriving at Toba-Fushimi, Hijikata assesses that they’re outnumbered, so their only option is to distract the enemy with a feint while another unit flanks. He decides Okita will lead the feint while he leads the flanks. However, since Okita is still unwell, Nobunaga decides she’ll lead the feint while Okita and Hijikata lead the flank.[8] The group eventually emerges victorious, ending with the defeat of Edimori and Tesla. Nobukatsu then arrives with an unconscious Chacha. He reveals his true master is the Great Gold Demon Taikou, Toyotomi Hideyoshi. A golden castle then suddenly appears that Nobukatsu goes to with Chacha.[9]

The group prepares to rescue Chacha. Hijikata recalls Demon Taikou is the identity of the voice he heard before. The group near the castle, the Sun Fortress, when they’re stopped by fortifications suddenly summoned by Sanada Emiyamaru. They then defeat him, Gotou Setanta, Mouri Medinaga, Mysterious Chousokabe Heroine X, Akashi Ex, all of whom were summoned by Taikou to obey Nobukatsu’s orders while he sacrifices Chacha to Taikou. The group confronts Nobukatsu, who reveals Taikou has been revived with Chacha’s sacrifice. He then shifts space to a cavern.[10]

Massive amounts of magical energy emanate from the Sun Fortress. Da Vinci reveals the corpse of a Demon God who died in the Time Temple is at the castle’s core. Golden Demon Taikou Hideyoshi (Andras) appears and announces the creation of an eternal golden paradise. Nobukatsu proclaims that within the Singularity, Taikou will bless all mortals with eternity. He did of all this to free Nobunaga from her obligations to the Oda, so they can relive their carefree childhoods forever. Nobunaga rejects him though, so he sends wave after wave of soldiers to force her to understand. While Ritsuka, Okita, and Hijikata fight Nobukatsu’s army, Nobunaga deals with her brother.[11]

After Nobukatsu’s army is defeated, Nobunaga prepares to execute him, but she misses on purpose. She then calls out to Chacha, whose yet be consumed by Taikou, and makes her realize Taikou’s deception. The group then learn Taikou cannot maintain his existence using the Spirit Origin of a Heroic Spirit as a catalyst. Realizing the Singularity will return to normal if they free Chacha, the group defeat Taikou.[12]

Andras disappears followed by Nobukatsu as his Spirit Origin was maintained by Andras. However, even with Andras gone, the Singularity isn't collapsing. Nobunaga deduces that a shard of Andras is with Hijikata, being the Demon God's original vessel.[12] She then proceeds to reveal the truth about Hijikata and his connection with Andras. Hijikata realizes the group is trapped in the Singularity until he dies. Okita tries to get Hijikata to understand that the Shinsengumi is already gone. But Hijikata refuses to listen, declaring the Shinsengumi will never end as long as he remains. He then fights the group to determine whether his or Okita’s Shinsengumi is the real one. He is defeated and disappears, telling Okita to always keep her banner flying.[3]

In the still collapsing Singularity, Hijikata accepts his death. Andras urges him to leave before the Singularity collapses completely. Hijikata regrets he wasn’t more compatible with Andras, as the Singularity would’ve been better fortified otherwise. Andras thanks him for teaching him to die lamenting the life lost, seeing this as the sole saving grace he received with his self-awareness. Accepting they’ll soon disappear, Andras tells Hijikata to keep fighting even though he cannot be saved. He calls this Hijikata’s punishment for briefly redeeming his evil, as well as his final wish. After Andras disappears, Hijikata states he’ll accept whatever battlefield he’s summoned to.[3]

Hijikata appears along with other members of the Shinsengumi when Sakura Saber uses Flag of Sincerity to fight Demon Archer. Along with the others, they are able to defeat Archer before being interrupted by Caster.

A rare type of Berserker, who displays both the savagery of an Evil Spirit and the rational aspects of a tactician in battle.[1]

Sakamoto Ryouma warns that Oryou that she doesn't need to hold back against Hijikata Toshizou.[13] When fighting him, Oryou notes that although his fighting style is all over the place, he is very strong. Sakamoto fears they won't be able to reunite with Okita Souji Alter if Hijikata kills them.[14]

Hijikata's Noble Phantasm is Shinsengumi. He used it against Demon King of the Sixth Heaven - Akechi Mitsuhide, but it failed to take it down.[15]