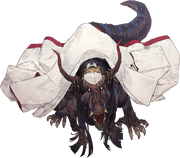 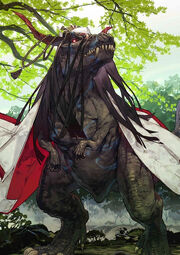 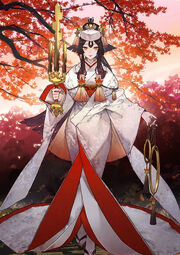 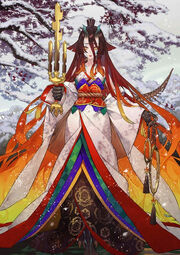 The serene mountain range of Togakushi[2]

Being called Momiji. The katana Boko-maru[2]

She is also summoned by Ritsuka Fujimaru in the Grand Orders of Fate/Grand Order.

The oni woman from the tale of the "Momijigari".[1] Koyo is her name, while Kijyo is the type of oni she is. Her Master Karin gave her the nickname "Momi" (モミ, Momi?), short for Momiji – another reading of Koyo, "autumn leaves".[3]

According to legend, she was killed by Taira no Koremochi during the Heian period, on Mount Togakushi. She was also said to be the leader of a group of bandits who opposed the Imperial Court, or a lady who taught villagers how to read and write and healed their illnesses. Her story was presented extensively in the form of a noh, jōruri and kabuki performance, the "Momijigari".[1]

Her name in her childhood was "Kureha" which was changed to "Kōyō" when she went to the capital. By nature she was a beauty overflowing with wisdom who drew the attention of many people; she was also skilled with the koto which earned her the notice of Minamoto no Tsunemoto's wife. She was favoured by Tsunemoto right away, but she received the capital punishment when she was suspected of putting a deadly curse on the shogun's wife. However, since she was already carrying Tsunemoto's child, instead, she was banished to the province of Shinano. Kōyō, who was welcomed by the villagers of Minase (later Kinasa), eventually became feared as the "kijyō (oni woman)" who led the bandits of the surrounding areas.[1]

Kōyō, who was said to be a gift from the Demon King of the Sixth Heaven in response to the prayers of a couple who weren't blessed with a child, possessed the qualities of witchcraft from a young age. Mount Togakushi, located in the province of Shinano where she was banished to, was a mountain of asceticism where ascetics founded a temple after they received a vision from Kuzuryūshin. In addition, Mount Iizuna, which was adjacent to Mount Togakushi, was a land of witchcraft and the supernatural that was popular with the worshippers of the tengu. With this place as the backdrop, Kōyō made another kijyō, "oni lady", her follower, who was a remnant of Taira no Masakado's group that hated the imperial court, and was known for her superhuman leg strength.[1]

The military commander Taira no Koremochi who was tasked with her subjugation met Kōyō in the mountains by chance, but it turned into a desperate battle. Koremochi, who prayed to the gods and Buddha, was gifted with a spirit sword capable of conquering demons and, dressed as a traveling priest, challenged Kōyō by himself and finally defeated her.[1]

She resembled nothing so much as a black dinosaur, with great horns growing from her head.[3]

Kijyo Koyo's dinosaur form was inspired by a great skeleton of a dragon god of the mountains which impressed her; perhaps in truth it was a dinosaur fossil.[2]

Berserker in Fate/Requiem, illustrated by NOCO.

Koyo is a sweet and gentle Servant despite being a Berserker. She often watches out for Voyager.

She does not like being called Momiji,[2] though is fine with it being shortened to Momi as Karin does.

Koyo has watched over Karin since she was born, but did not manifest physically until Karin was 9 years old because Karin's parents hate Servants and do not allow them to be summoned in their home.[4] Koyo first manifested when Karin was kidnapped by Louis XVII. They communicated via telepathy before then.[5]

The Boy Among the Stars[]

After Erice Utsumi is attacked by Kundry with a Projected Longinus, Koyo pulls her out of the water and heals the spear wound.[3]

When Nzambi attacks the Holy Grail Tournament with zombified Servants, Koyo defends innocents taking shelter in an empty stable next to the Colosseum. In the aftermath of the attack, Koyo and Karin help take care of the wounded.[6]

Koyo accompanies Erice and Karin to Shinjuku in spirit form. When the girls enter the red light district in search of Caren Himuro, a man suddenly runs out of a back alley and Koyo takes physical form to defend them, wrapping her tail around them protectively. Thankfully the man was just Kuchime, and rather than running toward Karin and Erice he was actually running away from Makki.[7]

Contrary to her class, Koyo is a gentle Servant well versed in healing magecraft,[3] which she uses via an incantation to Iizuna Gongen.[1] She possessed the qualities of witchcraft from a young age as a gift from the Demon King of the Sixth Heaven.[1]

When confronted by a bounded field that prevented spiritual beings like Servants from passing, Koyo nearly destroyed it just by pressing her claw and head into it. She only stopped when an employee manning the shop protected by the bounded field asked her to.[4]

Kijyo Koyo cannot speak, and communicates with her Master Karin through telepathy. Even then Karin does not actually hear Koyo's thoughts as words, but rather as feelings; Karin compares it to texting emoji.[5] Erice Utsumi has an app which tries to analyze Koyo's body movements and put it into words, though it is not very precise.[4] In her humanoid forms in Fate/Grand Order, she is capable of speech, but is still mute in her dinosaur form. The Master can somehow understand the meaning behind her growls.[1]

In her dinosaur form Koyo fights with her brute strength. She can transform her scrawny t-rex claws into mighty, muscular arms for attacks.

Her main weapon in her human and Oni forms is a three-pronged sword, with the middle blade extending past the other two blades and having small branches on it. Her magecraft revolves around conjuring fire and lightning, from praying to the dragon god Kuzuryūshin.[1] In her Oni form she also attacks with her dinosaur claws.

Kijyo Koyo is mentioned in Plus Period in relation to the Tohno ancestry of oni. Although she is not Akiha Tohno's ancestor, her legend could be considered as "Akiha's origin."[8]