Koyanskaya of Darkness is summoned as a Servant of Chaldea Security Organization after the events of the Tunguska Special Territory incident. She is one of two fragments that spilled out from Lostbelt: Beast IV's sealed cage: the side of her that mocks the Human Order and is harsh on humanity, being now more wicked than she was when posing as an apostle of the Alien God.

When displaying her divinity in her Third Ascension, she refers to herself as the Flame Empress Goddess of Hubris Starlight, Raiten Nikko, Honosumeragi-no-Hime-no-Kami (?).[1] 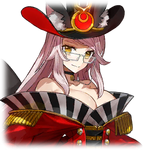 A captivating beauty who cruelly and bewitchingly leads humans around by the nose, following her policies of strict and dominating wildness.[1]

She has the right to become the head for the animals born in humanity's ecospheres (actual ecospheres, and their imaginary creations) and the Authority to wield them at their maximum capacity.[1]

Arco Wada is the character designer for Foreigner.