Lancer's True Name is Nezha (哪吒, Nata?). An elite general of Heaven, the Marshal of the Central Altar: Prince Nezha. Although befallen a tragic death in the mortal world, her rebirth occurred through a lotus flower. Famed for defeating and sealing the demons of the Ninety-Six Caverns, and is the greatest rival (self-proclaimed) of the Great Sage Equal to Heaven, Sun Wukong.[1][2]

Originally known by the name of Nalakūbara, a lower tier deity of Hindu mythology as well as the guardian god of Buddhism, he was eventually conveyed to China and became accepted into Taoism as the God of Young Boys. In modern days, she has been worshipped by many across central China and the East Asian regions. He debuted as a major character in "The Investiture of the Gods". In “Journey to the West”, she was first seen intercepting Sun Wukong who was causing a rampage across the heavens, subsequently being sent by the Heavenly Emperor to assist the group of Xuanzang Sanzang during their trip on multiple occasions.[1]

Born with a gem that was dropped down to the human world by an immortal of Mt. Kunlun, Taiyi Zhenren as her core, Nezha has an awkward existence as both a human and an immortal. While she was growing up in the human world, she was not a bad child, but was arrogant and violent. Accused of polluting the river, she killed the accusing god and even his superior god. Soon after, as she was blamed for bringing disaster to her human parents, she was compelled to commit suicide.[1]

Through twists and turns, Nezha was eventually revived as the spirit of a lotus. The resurrection was not only by the effort of Taiyi Zhenren, but also with the assistance from Shaka Nyorai.[1]

She is considered to be a doll made entirely of Paopei, where she would be called a Noble Phantasm Human. From birth, she had magical items such as the Qian-Kun Quan (Universe Ring) and the Hun-Tian Ling (Red Armillary Sash). Nezha subsequently received other magical items from Taiyi Zhenren: the Demon-Slaying Sword, the Phantom-Slaying Blade, the Ghost-Binding Rope, the Evil-Conquering Staff, the Embroidered Sphere, the Wind Fire Wheels, as well as the Fire-Tipped Spear. 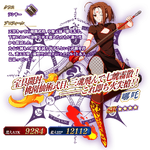 Sanzang of the Stars Goes to TianzhuEdit

Summoned as a Lancer, Nezha carries a strong personality as a guardian of Buddhism as seen in "Journey to the West". Perhaps she could have been a Berserker if she was summoned as the Nezha that lived just before committing suicide, where she had the brutality of a cruel nature.[1] Her Noble Phantasms are Flying Quiet Spirit - Fire-Tipped Spear and Three Faces and Six Arms – Overarching Immortal Beast. According to Li Shuwen, her bangles are the Universe Ring, which she uses as projectile weaponry fired from her arms.

Magic Resistance (A Rank): Nullifies magecraft spells that are Rank A or below. It is effectively impossible for modern mages to wound Nezha, a Divine General of the Heavenly Realm.[2]

Taoist Techniques (A Rank): By exercising the Taoist Arts, Nezha can manage the numerous Magic Tools [Paopei] that she inherited from Taiyi Zhenren.[2]

Spirit Pearl (A Rank): For Nezha, it is not her Spiritual Core, but the Precious Pearl buried inside her that acts as the main part of her body. Therefore, Nezha will continue to resurrect unless this Precious Pearl is completely destroyed.[2]

Protection of Tathāgata (B Rank): Nezha’s body was given to her by Shakyamuni Tathagata, and its adjustments were done by Taiyi Zhenren. Simultaneously, this body seals her “Three Heads and Six Arms” technique, and it additionally plays a role in controlling Nezha’s rampages.[2]

Retrieved from "https://typemoon.fandom.com/wiki/Lancer_(Fate/Grand_Order_-_Nezha)?oldid=161466"
Community content is available under CC-BY-SA unless otherwise noted.