Holy Lance of Longinus
???
???
Lucius Longinus (ルキウス･ロンギヌス, Rukiusu Ronginusu?), Class Name Lancer (ランサー, Ransā?), is a Lancer-class Servant summoned by Chitose Manazuru in the large Holy Grail War that predates the events of Fate/Requiem. They are still contracted in the world "After" the Holy Grail War‎‎.

The Roman soldier who pierced the side of Jesus Christ with a lance when He was on the cross, and met his end atop the hill of Calvary. In Christian tradition, Longinus's lance would come to be known as the "Holy Lance" and "Spear of Destiny".

Lucius was assaulted by bandits when he was still very young. Lucius stood up alone and fought the bandits with his knife and landed a heavy hit on one of the bandits, which crippled him, making him unable to walk and had to resort to begging. This pained Lucius' heart when he encountered the same bandit again years later on the streets one day. Later the ex-bandit fell ill and through nursing and care from a certain figure, he later recovered, discarded his faith on the Roman gods, and fully embraced a certain religion, unexpectedly become a believer to that religion before Lucius as well. Lucius would then walk his path to become one of the Roman soldiers, defeated hundreds of enemies in war, and furthermore promoted to lead as a Centurio, which led him to take away thousands of barbarians' lives throughout his life. Even so, he never forgot the fear and the feeling of stabbing the bandit on that day.

Chitose and Lucius are the strongest Servant and Master pair in all of Mosaic City. When an emergency in Mosaic City causes Code Crimson to be declared, the pair answers the call as the city's defenders.[1]

Longinus appears to have a large, muscular figure, adorned in silver armor with gold trim akin to that of a Roman Centurion, with a helm bearing wings and a crimson plume, crimson clothing, and a large, curved shield. He has short hair, but a long, braided tail trailing down the back. He also has a cross-shaped scar on his left cheek.

His casual clothing is a double-breasted vest, a sharp necktie coloured a deep, sober red, and a fedora.[2]

Lucius in his casual clothes. 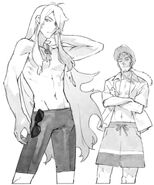 Lucius and Galahad in their swimwear.
Add a photo to this gallery

Erice Utsumi looks up to him and respect him above all others, due to knowing her since childhood and being a teacher to her. He trained her, hammering into her the skills to protect herself with the unbreakable iron conviction of a soldier, teaching her to stand up when she fell, to push on until her work was done, the value of defeat, and the fickleness of victory. He can be seen as a rational, caring gentleman. He's a lot more compassionate compared to his more ruthless Master. While Erice calls him "Mr. Lucius", he asks her to please not use formalities with him and just call him Lucius.[2]

Despite his close bond with Erice, he still adheres to Chitose's orders at the end of the day. He tries to kill Pran at the end of volume 1 as Chitose wishes, despite the emotional pain he knows it could inflict on Erice.

He sometimes adds Latin phrases to his speech, such as greeting Erice with bonam noctem, meaning good night.[2]

Lucius and Chitose won the Holy Grail War that changed the world. He later taught many things to Erice Utsumi in order to manage the Spirits afflicting her body.

Chitose and Lucius visited Erice's apartment unexpectedly shortly after she discovered Voyager, and Lucius helped himself to the tea in her pantry. Chitose spoke to Erice about having Erice stop her job as Nightwatch for a few months, to which the girl was vehemently opposed. But when she looked to Lucius for help, he only responded with a pained smile.[2]

When Nzambi attacked the Colosseum in Akihabara with zombified Servants, Lucius and Chitose fought many of them off as the strongest Master and Servant in all of Mosaic City.[1] Despite his affection for Erice, Lucius obeyed Chitose's order to attack Voyager when Erice refused to hand him over. But after Galahad intervened he and Chitose relented and allowed Voyager to stay with Erice.[3]

Longinus is described as the strongest Servant summoned in the past Grail War, said that no other Servants can compare with him in might and pride.

In combat, he is shown wielding the crimson Holy Lance of Longinus and a large shield. While the Spear's full capabilities are unknown, Galahad Alter comments that no armor can stand against it, however his Sword of Strange Hangings can rival it for a few blows because it too is a holy relic.

Retrieved from "https://typemoon.fandom.com/wiki/Lucius_Longinus?oldid=195184"
Community content is available under CC-BY-SA unless otherwise noted.