Luvia is a member of the Edelfelt family, and like Rin and her family, they did not participate in the Holy Grail War in this universe. She previously visited Fuyuki many years before during her constant visits to Japan. She saw Shirou attempting to unsuccessfully complete the high jump during one visit, causing her to form feelings for him.[1] She later met Rin within the Mage's Association, and they developed a bitter rivalry, partly because of their mutual affections for Shirou. They were both sent by Zelretch to obtain the Class Cards. 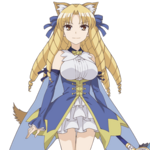 A wealthy and proud young woman and sorceress assigned to work together with Rin to capture the Class Cards. After Sapphire abandons her, Luvia immediately adopts Sapphire's new master, Miyu, and guides her to capture the Class Cards. She is indiscriminate in using her wealth, erecting a mansion across the street from Einzbern house in a single day, where she and Miyu are currently living.

Her rivalry with Rin stems from their mutual crush on Shirou (or at least plays a part in it), who fails to notice their attraction to him.

Because of her upbringing, Luvia is shown to be more bold on her desires, particularty when it comes to Shirou; even going as far as treating Illya as a younger sister (while fantasizing about Illya considering her as an older sister), considering the invitation of Illya and Shirou's family to events as a method of getting closer to him, and referring to Irisviel as "Mother of Shero" (シェロウのお母様 、Sherou no Okaa-sama) with little-to-no hesitation. Despite her assertive approach towards him, she does get embarrassed when directed with straightforward comments about herself from him (particularly her body) and got flustered when wearing Shirou's (Miyu's brother) clothes.[2]

Luvia is given Sapphire, allowing her to transform into a magical girl. Despite being ordered to work together with Rin, their rivalry causes her to treat collecting the cards like a contest. This makes Sapphire reject their contract,[3] which leads her to have Miyu act as a proxy in her rivalry against Rin.[4] She is indiscriminate in using her wealth, erecting a mansion across the street from Einzbern house in a single day, where she and Miyu are currently living.[4]

She assists Miyu during the search for the cards. Eventually all the cards are reunited, she later tries to escape with the aid of a helicopter, but that plan was foiled thanks to Rin. However, they soon learned that they wouldn't be allowed to return to the Clocktower unless they learn to cooperate.[5]

After being ordered to stay in Fuyuki City, Luvia, along with Rin, are instructed to investigate the irregularities in the ley lines that were damaged from the Class Cards and not properly recovered.[6]

Luvia is sent to Miyu's world after Miyu is kidnapped by the Ainsworth. It is there that the Ainsworths managed to capture Luvia and Rin off-screen, extract their souls into stuffed animals, and put artifical personalities in their real bodies. The Ainsworths then used their bodies as household maids in their mansion, which is where Illya eventually meets them as they enter to clean Beatrice Flowerchild's room.[7]

Luvia shares many, if not all the same abilities as her Fate counterpart such as specializing in the field of jewel magecraft, use of the Gandr curse as her primary offensive spell, and Lancashire-style martial arts.

She's also able to use her family's influences to manipulate information, order construction engineering and design, and even cut off financial aid from certain individuals, putting them in debt.[8]

Her Gandr shots are shown to be quite powerful as even in a seriously injured state, Luvia was still able to quickly gather and fire a shot capable of punching through a reinforced wall to strike Bazett.[9]