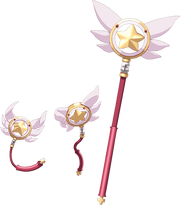 A Kaleidostick, a magical device that enables her user to become a magical girl. Though Ruby initially belongs to Rin, Rin's constant squabbling with Luvia causes Ruby to abandon Rin and contract herself to Illya instead. Ruby is Sapphire's older sister.

Ruby is a Mystic Code that resembles a toy Magical Girl Stick. Her appearance consists of a yellow star in a ring that has two small red bead with six white wings (the size of each wing is smaller than the one above it), and a red retractable handle that has a white top with a gold color cross at the bottom.

When not being wielded as a Kaleidostick, she lacks the handle.

Kaleid Ruby (カレイドルビー?) in Fate/Grand Order, illustrated by Anmi.
Add a photo to this gallery

Ruby is a cheerful, mischievous, but also sadistic Mystic Code that hates her creator, while also enjoy teasing and annoying her user/master. Aside from her sadistic traits, Ruby can be exceptionally loyal to her master; especially Illya, such as warning her about the dangers of invoking Zwei form on her body. Of course even with her loyalty, Ruby can be extremely manipulative, as she was able to smoothly trick Illya into proceeding through all three steps to establish a contract with it. She holds pride on the standards of a Magical Girl, something that she often berates Illya on.

Comically, Ruby's preferred method of teasing Illya is to reference her crush on her brother and then providing Illya a method to "win" his love, usually through manipulation. She also has used this level of teasing in Illya's relationship with Chloe and Miyu, pointing out the level of intimacy all three of them share.

Ruby and her sister Sapphire abandon both Rin and Luvia respectively when they had grown tired of the two's quarreling for the last time. Reverting the transformation on the two girls while they were fighting, the wands left the two to fall from mid-air and went off to find new masters with Ruby's choice being the reluctant Illya.

Ruby plays a minor role in the game. She's been stashed by Rin along with the blueprints for the Jeweled Sword Zelretch in Zelretch's Treasure Chest. When Rin is accidentally trapped inside the Chest along with Shirou, Ruby offers her help to leave, though Rin rebuffs her, remembering the last time she tried to use the wand. On that occasion, Ruby took control of Rin for several hours, after which Rin's friends alienated her as a weirdo.

After a few hours of being trapped in the Chest, Ruby manages to provoke Rin into using her again, transforming her into Kaleido Ruby. Unfortunately, just as everyone leaves the Chest, they're found by Issei and Ayako, leaving Rin to explain why she was inside a chest with Shirou while dressed as a magical girl.

As a Kaleidostick Mystic Code, Ruby can access the Mana Plane and provide her user/master unlimited magical energy. She can decide who can be her user/master through a three-step contract, while also allowing a temporary contract for others who wish to wield her.

Ruby's combat functions allows her to manipulate the Od within the user and assist them by either acting as medium to fire energy blasts or reinforce physical parameters. More experience users like Rin display the ability to condense mana onto the tip of the wand to create a blade durable enough to clash with Excalibur.

Defensively, Ruby can form a transparent barrier with A-rank strength that while powerful by modern standards, can only barely resists attacks like Caster's Rain of Light spell from the Age of Gods as Illya could still feel the intense heat from the beams. In close combat situations, the shield can be compress into a sort of second skin strong enough to stop a slash from Excalibur, but doing so would require diverting a large portion of mana. With the proper training and/or the right amount of imagination, the Kaleidosticks can also grant their users the ability to fly.

Outside of combat, the Kaleidosticks have demonstrated the ability to transform into wireless communication devices complete with live video chat. The two wands can also trade data between each other with a built in USB-like wire and port. She can record and project videos like a camera. When she isn't being wielded, she is able to move on her own by flight.

Another among of Ruby's device functions is called Secret Device #18 which allows Ruby to predict an immediate future event based on statistics and event fluctuation patterns based on the target's life.[1]

Humorously, it has been implied that Ruby is a very skilled chemist as she keeps multiple powerful sedatives, able to cause the victims to enter a 'nirvana'-type trance when injected, handy as well as a truth and love serum.

Retrieved from "https://typemoon.fandom.com/wiki/Magical_Ruby?oldid=194065"
Community content is available under CC-BY-SA unless otherwise noted.