Master Artoria (マスターアルトリア, Masutā Arutoria?) is a Master in a Holy Grail War, acting as an alternate version of Saber.

Within the world of Capsule Servant, Artoria's father is Gawain, her older brothers are Lancelot and Kay, her younger brother is Bedivere, and her cousin is Mordred.

Artoria is identical to Saber except for wearing a school uniform, wielding a katana, and having a Command Spell on her right hand. 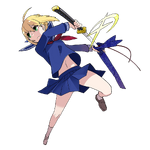 Master Artoria in Capsule Servant, illustrated by Medori.
Add a photo to this gallery

Artoria has a male-speech pattern that she is embarrassed about when pointed out by Shirou, blaming living in a family of men made her that way. She is a serious person, so she dislikes Kay's antics.

Artoria appears as a Master in Capsule Servant. In Shirou's path, he calls her manly to her dismay, calling it a disgrace to be pitied by him. In Rin's path, she introduces herself as a Master in the Holy Grail War, only for Rin to correct her that it is Capsule Servant. Ignoring the point, she compares it to something nonsensical Kay would utter to have her let down her guard. Deciding that she will show no mercy even to a child, she challenges Rin for the Grail as Rin once again points out that she is ignoring her original point.

Artoria is shown wielding a katana, but her strength is unknown.

Promotional materials for the Fate/Zero anime had a poll that asked readers about which other Servant classes other than Saber that they would like to see Artoria summoned under. The first ranked response was to instead show her as a Master, followed by the Rider, Berserker, and Lancer classes. Takashi Takeuchi did an illustration of the Master version of Saber to go along with it.

Retrieved from "https://typemoon.fandom.com/wiki/Master_Artoria?oldid=185718"
Community content is available under CC-BY-SA unless otherwise noted.