Knights of the Round Table

Magic Resistance
B[1]
Territory Creation
B+[1]

A member of Faerie Britain's Knights of the Round Table. She is a Fairy Knight assuming the name of the Heroic Spirit Lancelot, who belongs to the Greater Human History's Knights of the Round Table. The sole "dragon" species fairy in Britain. She acts in the manner of a merciless knight, but because of that conduct, her elegance and her appearance that distinguishes her from other fairies, she is said to be the proudest and most beautiful of them all.[1]

She is the left hand of the Dragon of Albion which fell off the dragon's rotting corpse and eventually evolved to have a humanoid form before Aurora came and adopted her, given the name "Melusine" by Aurora. Her current form came about from trying to emulate Aurora when the Fairy Lord picked her up. Melusine claims she is the older sister of Percival. Percival says that they were raised and trained together.

"Melusine's not my real name either, you know. However, it is really precious to me."[1]

Her name as a Fairy is Melusine. A fairy transmitted in France, also called Melisande. In Proper Human History, the heroine from a story about a "human–animal marriage", which often became a theme of folklores since ancient times. A half-Human, half-fairy beauty possessing the lower body of a snake and dragon wings. A fairy born from a human father and a fairy mother. Originally a beautiful young girl, but due to committing the sin of imprisoning her father on a cavern, she received a curse that "turned her lower body into that of a snake only on Saturdays". Supposedly, the curse became more powerful after she was seen by her lover when her lower body had turned into that of a snake, causing Melusine herself to become a repulsive snake.[1] 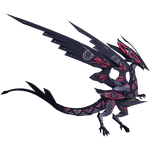 Withdrawn, but active. The type who gets things done, swiftly carrying out her duty while keeping her feelings concealed within. This maiden of a knight is a clean freak who does not play around, and is always cloaked in a tense atmosphere.

Since she classifies humans as something bad and mercilessly rejects them, she is thought of as a "cruel fairy", however, while she might shun humans, she does not detest them or consider them below herself. She simply perceives them as "life forms with individually low ability for survival".

Due in part to how she came into existence as a piece of rotten flesh, Melusine does not discriminate against others using "the mode of life one was born with" as a pretext.

When she is conducting herself as a Fairy Knight, her first person pronoun is "boku" and she has a prince-like demeanor; but when she returns to being Melusine, her first person pronoun becomes "watashi" and her natural personality comes out. Since she is originally someone who was "thrown away and left all by herself", she is prone to self-deprecating and easily succumbs to loneliness. Even after discovering the extent of Aurora's crimes and realizing she was nothing more than a tool for Aurora, she cannot help but continue to love her "mother". Furthermore, if Aurora dies for any reason her name will lose its power and she will turn into Albion as a Calamity.

Since she recognizes herself as the strongest creature, her preferences aren't based on whether one is strong or weak. Compared to her, everyone is a "weakling", after all. People possessing "courage to oppose those stronger than them" are not the type Melusine will grow to like, but ones with "kindness to care for those weaker than them". Or rather, she'll fawn on them going "The strong are to be obeyed and followed. That is absolute. In other words, obey and follow me."[1]

Lancelot (Saber)
The Knight of the Round Table, Lancelot! Yes! As I heard from Your Highness, he's a refined, elegant, faithful, and splendid knight. I'm proud as we-… Eh, wait a moment. Right now it seemed like he and Sir Tristan were doing something impossible for a knight with a wife… Huh…? Does this mean that Your Highness thought of me like that?![2]

Zhuge Liang
So you're El-Melloi II, the one who seems to be knowledged about the current status of Britain's Mystery in Proper-Human History. Alright, tell me! How was Albion in this history?[2]

Sieg
Fafnir… So there are also humans turned into dragons. If it was my previous self I'd have rejected him from the very beginning… But I'll forgive him. Since there are dragons who can turn into humans, the opposite can happen too.[2]

James Moriarty
Moriarty… That roundabout art of conversation isn't of my taste but… That Noble Phantasm ── To put it mildly, it's so my type. I wonder if I can attach it to my wings as supplementary armament.[2]

Lancelot (Berserker)
This is between us, but the dark Knight of the Lake is quite my type. Remember it, Master. There's no fighter that can flutter without a machine gun.[2]

Odysseus
The Horse of Troy? It even has an impudent transformation mechanism… I'm so jealous! Alright, let's have an aerobatic duel to see which one's the best fighter![2]

Europa
I can't overlook Odysseus' horse, but I think Europa's Talos is nice. I like that its design has warmth and humour. It's really nice that it's a different genre from mine.[2]

Morgan
Her Highness Morgan. The witch who truly loved the Country of the Fae. ...As if I could shamelessly show myself before her. Even though I was fully aware of how foolish I was being, I pointed my blade at her in return for the favor I received from her.[2]

Barghest
I do not understand. Just why does Barghest hate me so much? Even though I wanted to be friends with her. I mean, look, isn't she cute like a large-breed dog?[2]

Baobhan Sith
Baobhan Sith...Her Majesty Morgan's daughter and my colleague. I know she is a murderer with no due course, but I cannot denounce her for such foolishness. ...We are birds of a feather, after all.[2]

Percival
Percival! Thank goodness! So you were in Chaldea as w- Apologies, it would appear I got the wrong person... The Country of the Fae's Percival does not exist anymore. ...I knew it...I was fully...aware of it, but...[2]

Koyanskaya of Light
Koyanskaya...I'll overlook you as long as you are a Servant. However, if I see any signs of you turning into a juvenile Beast, I will fight you with all my might. Keep that in mind.[2]

She defeats Muramasa after he had defeated Fairy Knight Tristan and Fairy Knight Gawain.[3][4][5] She later fights Mash Kyrielight and Cú Chulainn during Morgan's army's attack on Sheffield.

It is revealed that Melusine massacred the Mirror Clan on Aurora's orders.

Melusine enters Aurora's room from the bell tower. Aurora asks Melusine to take her to the outside world now that Britain's end has come. She believes the Proper History will serve better to create her ideal world, considering humans to be weak. Melusine realizes Aurora will only repeat her actions for the sake of her purpose to be the most beloved of all. She then asks Aurora where Coral is. Aurora recalls she transformed her into a caterpillar for irritating her. She squashed her underfoot a few moments ago. Melusine then stabs Aurora, refusing to take her to the outside world. She understands Aurora could never be loved there as the inhabitants of the Proper History would see her for the poison she is. Aurora will only deteriorate and suffer in despair as she slowly dies in such a world. Because she loves her, Melusine doesn't want that to happen to Aurora.  She then stabs Aurora again, even though she understands Aurora's death means she'd return to her original state, and transforms.

After she kills Aurora, her name loses its power, causing her to lose her identity and revert to the form of Albion. However, Percival's sacrifice is able to restore her sense of self, and she saves Chaldea from being consumed by Oberon-Vortigern.

Melusine's primary weapon are her blades, Fairy Sword Arondight (妖精剣アロンダイト, Yōsei Ken Arondaito?), a weapon created inside her body and made out of her Magical Energy and outer skin. If she brings it outside, it will rapidly scatter into particles so she can only draw it for an instant. Think of it as firing at zero distance.[2] The swords are attached to her wrists and she uses them for slashing and punching by using the other end of the blades. Melusine can rapidly punch her opponent before finishing them off with another blow that ends with a laser. One of her attacks has her surrounding her blades with magical energy to appear to be a set of dragon jaws that "chomp" down on the target.[6]

Melusine regards airborne battles, impalement and cutting others to pieces as her specialties.[2] She's capable of flight in all her forms thanks to her ability to accelerate at will and ignore inertia, making her faster than everyone else in Faerie Britain.[citation needed]

During her fight against Senji Muramasa, they crossed swords multiple times in the air, until he got dropped down the Great pit without getting a good hit in. Although it took him less than 10 seconds to be dumped down there, Lancelot managed to hit his Spiritual Core several times. Muramasa believes that a normal Servant would have died twelve times over. However, thanks to having been tempered by the Alien God, Muramasa narrowly escaped death. It took him three days to get to the point he could move enough to crawl up and out of the hole.[4] Although Lancelot beat Muramasa to "a pulp," Muramasa is confident that if he used "everything he's got" and spent all his Magical Energy he could defeat a Fairy Knight.[5]

Melusine's second Noble Phantasm is Hollow Heart Albion. It grants her the power to take the form of the Dragon of Albion itself, and while it is not able to replicate the dragon's full strength it is still capable of inflicting serious damage upon the Storm Border.

As a remnant of the Dragon of Albion, Melusine can transform into a Dragon. As a Servant, this is manifested in her second Noble Phantasm Hollow Heart Albion.

Melusine is illustrated by CHOCO.