TYPE-MOON Wiki
Register
Don't have an account?
Sign In
Advertisement
in: Characters in Fate/Prototype, Servants, Caster-class Servants,
and 21 more

The human world, pranks, and boys

Originating from the Fate/Prototype worldline, she served Arthur Pendragon as his court magus. She is a woman compared to her male counterpart who serves Artoria Pendragon.

Another version of the Magus of Flowers, visiting from a different world. Always smiling regardless of the situation happening around her, she is a woman like beautiful flowers.

In front of her beauty, anyone would lose touch with reality and forget their hostility. On the other hand, her excessive beauty (and allure) make her a temptress that has a tendency to lead men astray. Though her calm demeanor gives the impression of a wise sage, her complete lack of tension and her emotionless way of thinking give the impression of a cold magus with no concern for the affairs of the human world.

"Now, now, no need to get all hot and bothered. No matter what happens, in the end you are all fleeting creatures, just like the birds. All's well that ends well, right? Ah, though I don't really want to see the end, or for things to go unfinished."[1]

Merlin is described as someone who is so beautiful, that those who would gaze upon her shall forget any animosity they may have at the time. Like her male counterpart, she has a hood in her first ascension. 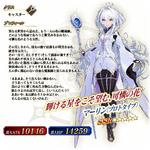 She describes herself an older sister, someone who watches over the masters journey. At the same time she is somewhat apathetic and comes of as seemingly uncaring.

She interprets everything objectively, and even when analyzing the ugliest parts of humanity, she describes them in a hopeful tone, saying "Not everything needs to be neat and clean. No matter how sullied you get, as long as you have one clean spot, a single shining star, that's more than enough."

She loves the human world, pranks, and boys.

The Mage of Flowers eludes practically all matters with an interested and amicable smile.

Unlike Man Merlin, she preserved her content mindset, never concerning herself with anything.

She's very aware of her status as a stranger to human society. She doesn't lament this fact at all, she just has "humans" and "me" split as two completely separate things in her head.

"I'm just something of a navigator tool created by humanity. I don't really wanna join the club."

"I'm just some woman wishing your journey would last forever. Well, I will pull some strings here and there if I ever feel like the journey is starting to get boring."[1]

In Fate/Prototype: Fragments of Sky Silver, Merlin mostly appears in Saber's flashbacks. In one flashback, she is seen talking to Saber before he heads off to Rome to fight Lucius Tiberius.

At the end of Sky Silver, she contacts Arthur as he is being summoned to participate in the Second Tokyo Holy Grail via his dreams and offers to heal his exhaustion. Saber accepts. As Saber is about to wake up, Merlin warns Saber that he may have to battle the Servants from the First War again. Merlin then wakes him up.

Merlin stops Arthur just as he is about to enter Avalon. She then warns him that Beast VI is still alive and that he will have to go on a journey through the multiverse to slay it for good.

Merlin teams up with Chaldea and First Hassan to defeat Beast VI/S.

When Arthur appears to aid them, he says that Merlin prophesized Beast VI/G and VI/S would only appear after VI/L and VI/R had already manifested. When Merlin sent Arthur into the world of the mobile Fate/Grand Order, VI/L and VI/R were the Beasts he was hunting, prompting VI/S to appear in Arcade's world.[3]

After Beast VI/S is defeated, Merlin happily exclaims that she is glad the Mash of this world didn't die against Beast VI/S like the mobile world's Mash did against Beast I, since the Arcade world doesn't have a Cath Palug to save her. Afterward, Arthur gets angry at Merlin for not telling him that she can just leave Avalon whenever she wants, and making him hunt for Beast VI all on his own instead of having her with him. Merlin explains that she decided to leave Avalon and help Mash and Fujimaru just because it seemed fun, which makes Arthur even angrier, prompting Merlin to beg Noah to save her.[3]

Unlike her male counterpart who primarily fights using a sword, Merlin fights using her staff and her Magecraft, shooting magical blasts at her enemies.

She qualifies for Grand Caster, but if the Human Order asked her to take up the position she would ignore it.[4]

Merlin's Noble Phantasm is Hope of Avalon. Due to unknowns events, this Merlin is no longer confined in the tower of Avalon. Avalon will continue to exist until the moment humanity ends. Merlin perceives Avalon as the image of the ideal future humanity tries to reach. For that reason, the Avalon she resides in is not locked, but instead left open as the finish line for humanity. Merlin's staff points beyond the horizon. To hope itself, which continues to shine beyond eternity, inviting people to run towards it.[1]

Merlin is illustrated by Taiki.