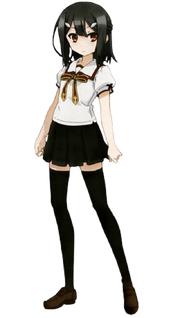 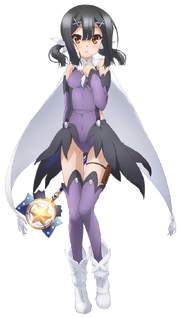 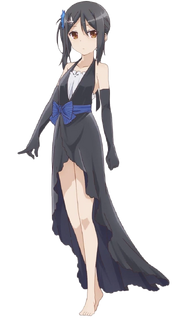 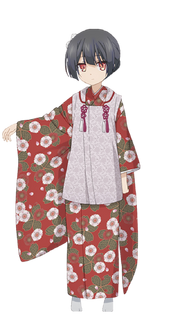 All Around Type-Moon
Fate/kaleid liner PRISMA☆ILLYA

Shirou Emiya (Foster, but due to her wish granting power, she became his biological sister)

After Kiritsugu's death, Shirou couldn't treat her like a tool or even raise her like a normal child, so she was confined within the Emiya residence. Shirou gave her textbooks for her education, but it was the knowledge that didn't hurt her and for non-practical use. When Miyu became ten years old, she had developed more human expressions. When Shirou reminisces Kiritsugu's last moments, Miyu unknowingly activated her wish that Shirou and Miyu become true siblings. Shirou at that moment decided to treat her more like a sister and to take her outside to see the ocean. Shirou took Miyu back to the Sakatsuki residence and tried to explain to her about her family and his intentions on saving her. Shirou's explanation was interrupted by Julian, when he accused Shirou to be a thief. Shirou tried to tell Miyu to run but she didn't know where to run and Julian kidnaps her.

After Shirou won the Fifth Ainsworth Holy Grail War, she is teleported to another Parallel world through Shirou's wish upon the Holy Grail. However, since Shirou was fighting Angelica in his Reality Marble, he was not taken with her with everything else in the cavern such as the Class Cards and the Holy Grail Ritual circle.[4] Later upon arriving in Illya's world, she was taken in by Luvia in her search to rival Illya and Rin's partnership.

Miyu is a young girl with black hair tied in low pigtails, and golden-brown eyes. As a normal girl, she wears the standard uniform of her elementary school with long black knee socks, and other outfits usually picked by Luvia. When she becomes a magical girl with Kaleidostick Magical Sapphire she wears a cute blue and black outfit with a white cape and boots. She also wears a strap on her left leg where she keeps the Class Cards.

Before and during the Fifth Ainsworth Holy Grail War, she normally wears a kimono (a normal one and cooking apron). Her eyes were also notably red with a golden shine instead of golden-brown until she wished to be a real sister to Shirou, giving her Shirou's eye colour as proof of being biological siblings. When being used as a Holy Grail and granting Shirou's wish, she wears a black babydoll dress with three bottom ends that can shape the entire outfit like a cross.

Originally, Miyu has a mature, dutiful, and rather unfriendly personality. She takes her duties as a Magical Girl very seriously and is initially dismissive of Illya's abilities. She is very knowledgeable that she tends to view everything more logically while explaining or exploiting the hard facts behind it, not understanding the emotions surrounding them. This side of her expresses how she lacks imagination and hints a sense of loss in child innocence. Despite this, she is shown to have vulnerable sides such being embarrass and being timid towards those who conveys acts of deep kindness and other possible overwhelming emotions like obsession.

When she opens up to those she becomes close to (mainly Illya), she exhibits the capacity to deeply care and is very dedicated towards them. This creates two sides to her personality where she can very affectionate and devoted to someone she cares for, but extremely cold and dismissive towards anyone else.

It is revealed in the past that she was originally stoic if not emotionless due to her duties of being the Holy Grail but showed sense of attachment. Her interactions with Emiya Shirou, who she eventually calls her brother, soon brought more color and emotions to her world while also bringing deep guilt and burden in her heart. This, along with the Ainsworth's treatment towards her, unveils the reason behind the personality she had when she was first introduced. Because of her upbringings, the guilt, burden, and turmoil within herself brought her great despair that she almost gave up on the idea of hope, but after Illya and her allies/friends saved her, she begins to show resolve. Like Illya, Miyu also seeks a path where everyone can be saved.

She comes to value Illya's friendship greatly and is highly protective of her. This dedications goes as far as willing to risk her life for the sake of their friendship. She shows another side of her personality when she is around her brother, where she behaves like the young girl she actually is. These behaviours include wanting to be spoiled, like to wear animal onsies, and throwing a childish temper.

After reuniting with her brother and having the entire group stay in the Emiya residence, it was shown that she likes animal-themed pajamas; and acts rather spoiled in front of her brother.

Upon arriving at the eighth's card location, it is revealed that the 8th Card had come from another Holy Grail ritual. Confronting the newly summoned Archer Servant (Gilgamesh), Illya inadvertently splits the Servant into two and it gains a physical body, in the form of Child Gilgamesh. After dressing himself, Gilgamesh revealed that Miyu is technically a princess who comes from a parallel world. As he is explaining this, Gilgamesh's main body tries to absorbed Miyu to power itself up. However, she is saved by Illya using the combined power of the Ruby and Sapphire sticks with help from Chloe and the others.

After Miyu is rescued from Darius, the group reconvenes at the Emiya's old house where Shirou reveals his and Miyu's origins. In his story, it is revealed that Miyu's original name was Miyu Sakatsuki. She was a "Child of God", a child from an occult religion that believes children to be the closest to God and spirits. In a past age of a high death rate of child birth, the religion worshiped children below 6 years old as entities between gods and humans, and as a child of the last remnant of this religion this granted her wish-granting powers, not unlike the Holy Grail. Kiritsugu and Shirou found her five years ago in an incident that almost destroyed Fuyuki in an enormous black shadow, and witnessed Miyu dispel it. Kiritsugu took her, wishing to utilize her wish-granting power to save the world.

As a normal elementary school student, Miyu possesses knowledge and athletic skills that make her a genius even among adults.

As a Magical Girl, Miyu is able to utilize the Mystic Code Kaleidostick, Magical Sapphire, to tap into mana from parallel worlds and gains virtually unlimited magical energy. She also can utilize Class Cards; Including them to provide her Heroic Spirit's Noble Phantasm and Installing them to gains Heroic Spirit's abilities.

As the Child of God, she possess the capacity into becoming a complete Holy Grail unlike Illya or Chloe who are only Lesser Grails. However, this power seems to have disappeared after she turned 10 years old. It is shown that certain rituals/preparations are required for her to function as a Holy Grail that can grant wishes. Like in the original Fate/Stay Night, one of those rituals is the Holy Grail War. In accordance to certain wishes, Miyu could end up forfeiting her life to grant those wishes.