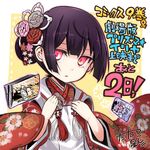 Seijin Takenoko's Illustration of Miyu Sakatsuki for the Fate/kaleid liner PRISMA☆ILLYA Oath of Snow movie.
Add a photo to this gallery

Miyu continues to fight as a Magical Girl, dealing with the mysterious 8th Class Card. After dealing with Illya's split personality, Kuro, Miyu and co. fight the Enforcer, Bazett. They defeated Bazett and cooperated with her to capture the 8th Card.

The 8th Card was revealed to have come from another Holy Grail ritual, and it gains a physical body, child Gilgamesh. Later it was revealed by Gilgamesh that she comes from a parallel world and she is a princess. After being saved from black Gilgamesh by Illya, Miyu was captured by Angelica and Beatrice from another world.

Later it was revealed her original name was Miyu Sakatsuki. She was a "Child of God", a child from an occult religion that worships children below 10 years old as gods, and this granted her wish-granting power, not unlike the Holy Grail. Kiritsugu and Shirou found her in an incident that brought her hometown into enormous black fire, and witnessed Miyu dispel the fire. Kiritsugu took her, wishing to utilize her wish-granting power to save the world.

Kiritsugu asked Shirou to use Miyu to grant his wish of world salvation, but Shirou couldn't do it because Miyu became more human each day. Kiritsugu died some years later, and Shirou continued to taking care of Miyu. At this time, Shirou and Miyu became really close. Miyu then used her power to wish for her and Shirou to become real siblings, in the anime this is seen by the change of eye color from her previous pink-gold colour to the same coloured amber eyes as Shirou.

Retrieved from "https://typemoon.fandom.com/wiki/Miyu_Edelfelt?oldid=114534"
Community content is available under CC-BY-SA unless otherwise noted.