Magic Resistance
A
Riding
A
Divinity
B

Ganesha forcibly fused with Jinako, altering her Saint Graph on conceptual level to fuse with her with only reason being that they are compatible. And due to this, everyone will refer to her as Ganesha and no one will recognize her, even by her previous servant Karna 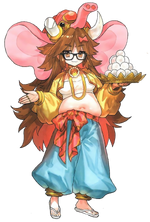 Ganesha is capable of damaging enemies with intense light and stream of water. She can create small tornadoes and air streams.

As a Hindu God, Ganesha's intellect should be high, specializing in science and wisdom. She is quite skilled fighter as well, capable of keeping up with the likes of Karna and Rama. Ganesha also has good analytical skills, using her seemingly useless knowledge of otaku culture as a tool to analyze Arjuna's plan.

Ganesha's second Noble Phantasm is Ganesha Vighneshvara: I Command, I am the God of Obstacles, an A Rank Anti-Intrusion Noble Phantasm that can't be used unless Ganesha is in special conditions. Vighneshvara is another name of Ganesha and means "God of Obstacles". It can be activated upon forcefully purifying the aspects that make Ganesha “A god that removes obstacles”. An absolute and impenetrable Bounded Field that cannot be entered and no action can be taken against, that will appear using her ability as a God who removes obstacles. If used offensively, with absolute force, it will wipe away and even push back any obstacle/attack in front of her eyes. Of course, it can be used as an absolute shield that protects from any obstacle/attacks when used defensively. In the Indian Lostbelt she used this in conjunction with Lakshmibai’s Noble Phantasm to create a “A hikikomori room that no one can definitely come inside”. She was able to bring forth a “room” that enveloped her entire surroundings and one that not even a god of creation would be able to do anything against.

Arco Wada is the character designer for MoonCancer.

Retrieved from "https://typemoon.fandom.com/wiki/MoonCancer_(Fate/Grand_Order_-_Ganesha)?oldid=161852"
Community content is available under CC-BY-SA unless otherwise noted.